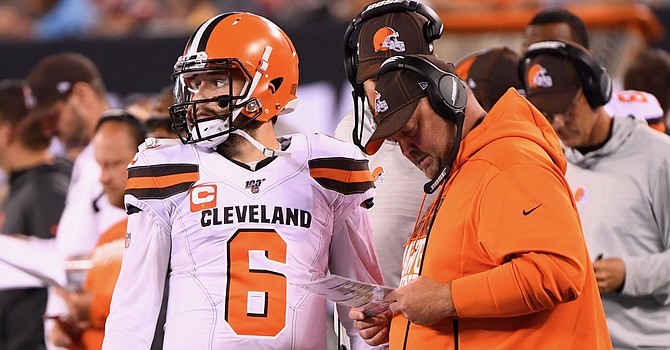 An intense crowd is welcome on more on defense than offense, per Baker Mayfield.

Takeaways from Browns practice and interviews:

1. Shhhhhh: The Browns have preached tuning out the noise all year. But they couldn’t do it during Sunday’s 19-16 win over Buffalo in FirstEnergy Stadium and it bothers their quarterback.

Baker Mayfield didn’t back down on comments after the game that he didn’t appreciate the crowd being too loud for his offense to hear his signals during the team’s exhibition of futility near the goal line.

“It might have ruffled some feathers, but once again, that is OK,” Mayfield said, striking his James Dean pose. “When we are on offense on a critical down, we need to be able to have silence in our home stadium. It has to be an advantage for us, and then when they get the ball, it has to be really loud. It is just football.”

What’s ironic about Mayfield’s admonishment is that the fans deserve credit for putting three points on the board at a critical point in the Buffalo game.

The Browns were on their way to failing for a second consecutive possession and 10th consecutive goal-to-go situation without a point. They faced fourth-and-goal from the Buffalo 3 and coach Freddie Kitchens kept the offense on the field, fulling intending to try a pass play out of the dreaded empty set.

Right tackle Chris Hubbard false started when he mis-heard the snap count and the five-yard penalty convinced Kitchens to try a field goal, which Austin Seibert made 27 yards for a 9-7 lead.

Contrary to public opinion, Hubbard did not commit the penalty on purpose to save his coach from denying the club points again. Hubbard said after the game that Mayfield’s snap count was drowned out by the crowd noise. Good thing.

2. Chubba wubba dub: What did Nick Chubb think of sharing the backfield with Kareem Hunt for the first time Sunday against Buffalo?

Everyone expects the Chubb-Hunt package to expand. At the very least, they should be on the field together in short-yardage and goal-line situations.

“I feel like there is a lot more to go,” Hunt said. “We have to build off that, get our bodies together and get ready to go back out there and compete hard again on Thursday night.”

Mayfield agreed that Chubb and Hunt could at long last be the identity of the team.

“It can change the identity, but what it comes down to is being physical up front, us doing our job in the run game and establishing that early and often to where we can take our shots when we want to,” he said.

I’ll reiterate what I wrote on Tuesday: Chubb and Hunt can be a better version of Kevin Mack and Earnest Byner. Funneling the offense through them is the Browns’ best hope of making a belated run at the playoffs.

3. Super Joe’s return: Former Browns cornerback Joe Haden is coming off his best game since joining the rival Steelers in 2017. Against the Rams, Haden had his second interception of the season and totaled five passes defensed for the second time in his career. Haden also had seven tackles and forced a fumble.

Haden turned 30 in April and is in his 10th NFL season.

4. Brownie bits: The Browns have to make a decision on whether to activate rookie guard Drew Forbes this week. If they decide not to, his season will end on injured reserve. Freddie Kitchens was non-committal. “He has done a great job of carrying over things that he learned, and his learning continued to improve, even though he was not on the field getting reps so that gives him a chance, yes,” Kitchens said. If Forbes is activated, he could get a turn at the problematical right guard position before season’s end. Wyatt Teller has not exactly made anyone forgot Eric Kush or Austin Corbett …

Kitchens would not say if talked to Jarvis Landry about the taunting penalty after his first touchdown that indirectly cost the Browns a point because Austin Seibert missed a PAT from 48 yards as a result. “I just do not like penalties,” Kitchens said. “I am not going to question whether it is a penalty or not, but they threw the flag. I do not like that, so we do not need to do things that gets us penalties.” …

Defensive end Olivier Vernon (knee) and safety Eric Murray (knee) did not participate in the team’s final practice of the week, virtually assuring they won’t be active Thursday against the Steelers. With safety Jermain Whitehead released and Murray out, the Browns could shuck their base 4-2-5 alignment and give more playing time to rookie linebacker Sione Takitaki in the conventional 4-3 defense.