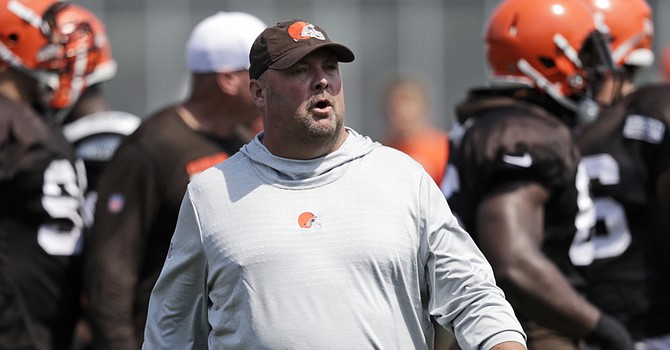 Kitchens is learning how to use his arsenal, and it's growing as players return from injury.

The biggest mystery of the Browns’ first four games was the offense.

Where did it go for three games -- and why did it come back?

As the week winded down after the Browns exploded for 40 points against the Baltimore Ravens, it became increasingly clear to me that the problem most likely was new offensive coordinator Todd Monken.

That may be an unfair generality. But the evidence – circumstantial as it might be – leaves me no better explanation.

The Browns buried the ghost of Hue Jackson at mid-point last season by developing an effective offense on the fly that meshed well with rookie quarterback Baker Mayfield. It not only turned around their season, it earned Freddie Kitchens the head coach job.

Kitchens added to the offense he learned under fired coordinator Todd Haley. He combined creative play-calling – a wishbone formation, double reverses, shovel passes -- with the fundamental principle of running the ball with Nick Chubb.

Kitchens bolstered the offensive line with multiple tight end-formations and made sure Mayfield stayed under center to keep the running game from predictability. Haley was adamant about that.

Monken loved spreading out defenses with three- and four-receiver alignments with one back lined up alongside the quarterback in shotgun formation. He favored longer pass routes in the middle of the field and preferred the forward pass -- rather than the handoff -- near the goal line.

It was never lost on me what Mayfield said upon the news of Monken being named offensive coordinator in early February.

Asked about Monken, Mayfield joked, "He’s actually a Oklahoma State guy at heart, so we’re going to butt heads about that a lot." Then he added, "He’s a great guy. They obviously love throwing the ball. I think we’re going to have to find ways to convince him to hand the ball off to Chubb.”

Voila: After three anemic and painful offensive showings, the Browns rolled up 530 yards against the No. 1-ranked Ravens defense, including 193 yards rushing. Chubb had 165 yards and three touchdowns on 20 rush attempts. His 88-yard touchdown run with 9:35 left caused safety Earl Thomas to submit – or quit – and sent the crowd filtering to the exits.

“I think, offensively, we kind of found our identity,” Mayfield said on Thursday.

Guard Joel Bitonio agreed the offensive performance reminded him of the 2018 offense at its best.

“I think that was the blueprint,” Bitonio said. “We ran the ball early. It was not as successful, but we wore them down a little bit and then finally we broke some big runs in the second half.

“Big plays, either from Jarvis [Landry] or a couple of those little passes to [tight end] Ricky [Seals-Jones] running down there for the [59-yard] catch. Just mixing it up and keeping the defense guessing.

“There were motions. There was movement. There were different looks and different routes out of the same looks. You have to think, ‘Oh this is a run look’, and we end up passing out of it. Things like that. Changing it up and getting into a rhythm.

"I think it started with establishing the run. It was not perfect in the first half. We only maybe ran for 40 yards in the first half or something, but you do it, you establish it, you show them those formations and then you can do some things off of those.”

“When you do that, it opens up the play-action game and then also it keeps the defense on their heels when you are staying ahead of the chains like that,” he said. “Getting explosive runs helps us out tremendously.”

Near the goal line, the Browns lined up a “jumbo formation” using guard Justin McCray as a tackle eligible and tight end Pharaoh Brown as a blocking back. Chubb scored on a 2-yard run behind this formation.

It was a far cry from throwing unsuccessfully four times from the 4-yard line with the game on the line against the Rams. Mayfield was in "empty formation" -- with Chubb spread out wide -- on three of those four plays.

“I think we set the standard in how we have success, and, obviously, starting up front,” Mayfield said of the offense in Baltimore. “You talk about football, it starts up front with the offensive line and getting the run game going. That allows the receivers to have open lanes and play action. Anytime you can give Nick Chubb the ball like that, he is going to make a lot of plays. We have set the standard on what we need to do and how I need to play.”

Going forward: The remnants of Kitchens’ old offense were evident in Baltimore.

The greater use of Mayfield under center with more two-tight end formations, a jumbo formation, an exotic double reverse pass from Odell Beckham Jr. -- it all reminded everyone of the 2018 offense that earned Kitchens the head coach job.

“Listen,” Kitchens said, “the game of football, you can make it as complicated as you want, but I like to simplify things. It is about running the ball, stopping the run and taking the ball away more than they get it from you. That is what it is with me. That is not real fancy, but that is the way games are won and lost.”

I think Kitchens hired Monken to expand the offense from a year ago. For three games, the offense was bogged down in pre-snap penalties, Chubb’s under-use, too much shotgun formation, and Mayfield’s hesitancy in releasing the ball.

The win over the Ravens was epic for the Browns – their most lopsided in 41 games of the division rivalry. Almost as important, I think, was Kitchens reclaiming the offense from Monken and returning to what got him the job.