The Browns Found Their Identity In An Ugly Win Over Buffalo 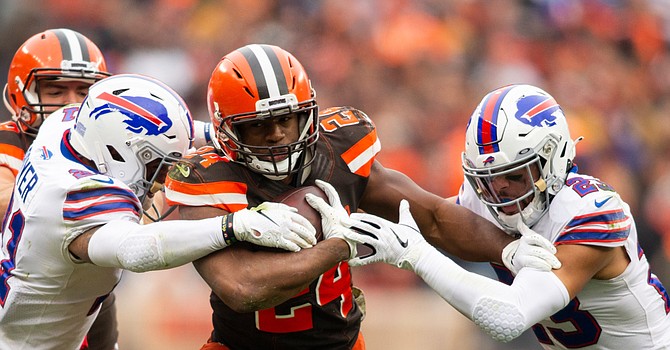 Browns find a way to win with a double-headed monster at RB.

If you weren’t pleased with the Browns’ 19-16 win over the Buffalo Bills because of epic struggles at the goal line and more questionable decisions from the sideline, you missed something more important than those peccadilloes.

There was the win itself, of course, which was paramount.

There was Baker Mayfield’s game-winning drive at the end – his first in the fourth quarter in four opportunities this season. He needed that.

Last but not least is this: At long last, the Browns have found their offensive identity.

It is Nick Chubb and Kareem Hunt.

It is not social media butterflies Odell Beckham Jr. and Jarvis Landry.

Repeat: It is not Odell Beckham Jr. and Jarvis Landry.

Because of Hunt’s eight-game NFL suspension, Sunday marked the first appearance of Chubb and Hunt on the field together.

It was an unmitigated success. It was an inspiration. It was a revelation.

It was the single biggest reason the Browns still have faint, flickering hopes of making a run at the rampaging Baltimore Ravens.

Déjà vu all over again: Nobody knew how coach Freddie Kitchens would incorporate Hunt in his first game eligible off suspension. Would he be a third-down replacement for Dontrell Hilliard? Would he spell Chubb as the primary ball-carrier every couple series?

No. Kitchens took a page out of the Browns’ history book and conjoined Chubb and Hunt like Kevin Mack and Earnest Byner, circa 1985. It was ingenius. It might – might – save the Browns’ season.

On the second play of the game, Hunt and Chubb lined up on opposite sides of Mayfield in the shotgun formation. Hunt broke to the left and laid a textbook block on safety Micah Hyde, creating a crease for Chubb to rip off a 21-yard run.

The energy emitting from that block was palpable. It was felt on the field and in the stands. The crowd roared.

Chubb would finish with 116 yards on 20 rushes. That was deceiving because six of Chubb’s runs netted minus-2 yards in the Bermuda Triangle of plays near the goal line. Hunt was not on the field for any of those plays – an oversight that will be corrected, to be sure.

So Hunt’s blocking actually helped Chubb to 118 yards on 14 rushes – an average of 8.4 yards per rush. Hunt also carried the ball four times for 30 yards, and had seven receptions on nine targets. His biggest catch converted a third-and-7 on Mayfield’s winning touchdown drive.

The two backs fed off each other like the reincarnation of Mack and Byner, who became the third tandem of backs to top 1,000 yards in a season in 1985.

Neither Mack nor Byner would rush for 1,000 yards again for the Browns, but teammates to this day swear they were the heart and soul of the Browns’ teams that made the playoffs in 1985, ’86, ’87 and ’88, and reached the AFC Championship Game after the ’86 and ’87 seasons.

Byner was traded after the ’88 season after back-to-back personal fouls in a wild-card loss – a move former GM Ernie Accorsi has said was his biggest regret.

While the Browns’ resurgence in the 1980s is often attributed to the maturation of Bernie Kosar as franchise quarterback, it wouldn’t have happened without Mack and Byner.

The backs, who became close friends, were the identity of those Browns’ playoff teams.

Chubb and Hunt can do the same.

Nothing given, everything earned: Cleveland identified with Mack and Byner because of their selflessness, passion and will to win. Chubb and Hunt have the same attributes.

They don’t taunt after big plays and don’t over-celebrate after touchdowns. They don’t pose and don’t flaunt the uniform code with flashy cleats, shiny visors and expensive watches.

They don’t complain about not getting the ball enough or moan about officiating. They play football and play it hard.

The package of plays debuted by Chubb and Hunt together against Buffalo was just the beginning.

It should be expanded for short-yardage and goal-line situations. Together, they can give Mayfield options in the running and passing game that will both reduce the reliance on diva receivers Beckham and Landry, and enhance them.

No team in the NFL has a pair of backs as good and as versatile as Chubb and Hunt. That gives the Browns an unbelievable edge because no defense can adequately prepare for something it hasn’t seen. It’s kind of like the first time around the league for Baltimore running quarterback Lamar Jackson. Until you’ve seen it at least once, you can’t stop it.

What’s more, the undeniable bond between Chubb and Hunt makes each stronger.

The Browns need to feed off their energy and redirect their offense through these two super talents.

The Browns would be eminently more likable and just might realize their offensive potential.