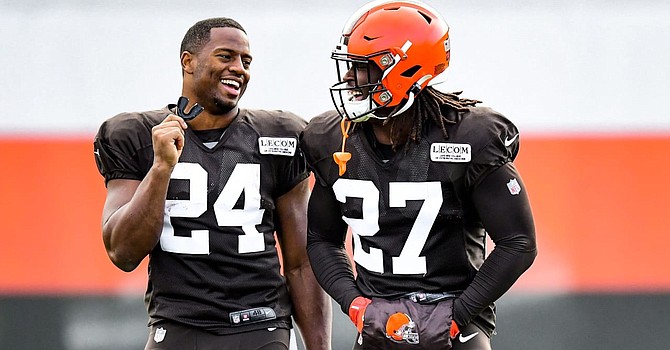 The Browns have something special in Nick Chubb and Kareem Hunt. They need to make them their identity. (Cleveland Browns)

There’s a scene captured in an NFL Films preview of the 2020 Cleveland Browns called “Breaking the Cycle” that Kevin Stefanski should share with his team, if he hasn’t already.

During a home game, the camera cuts to the Browns’ sideline, where Nick Chubb is sitting on a water cooler apparently after just scoring a touchdown. Odell Beckham Jr. playfully saunters up to Chubb.

This is the essence of Nick Chubb.

Which is why it’s stupid to think the Browns would leverage the home-town discount RB2 Kareem Hunt gave the club in a two-year extension this week to pressure Chubb into a similarly team-friendly deal when his turn comes up next year.

Nick Chubb is a precious gem that should be venerated. When a team is blessed with a selfless, franchise player like Chubb, it should do everything in its power to honor and support him.

Here’s Chubb’s reaction to Hunt receiving a two-year extension for $13.25 million, giving Hunt a three-year average of $5.5 million while Chubb is receiving about $1.3 million over the next two years:

“I hope so … definitely,” he said. “I would not mind staying here with Kareem and staying with the Browns for as long as I can. It definitely would be special if we could do that. I look forward to playing with him this season and for more to come.”

The Browns have something unique and special in Chubb and Hunt.

There is no tandem of backs like them currently on an NFL team. Each is an RB1. They have different skill-sets. Chubb is a rare, big back with home-run breakaway ability. In just two seasons, Chubb owns the longest and third-longest runs in Browns history. Hunt was an NFL rushing champion with Kansas City who is one of the best backs running with the ball after a catch.

Beyond their obvious abilities is their bond and friendship and camaraderie and competitiveness.

“The biggest thing is we have the same goals,” Hunt said. “We want to win. No matter how, we just want to find a way to win. We do not get selfish or anything like that. We share it with each other. We know it is only one football. I am happy for Nick because he is still going to go out there and perform at a high level like I know he is.”

The possibilities of using Chubb and Hunt together – not as one lead-blocking for the other or as alternates from quarter to quarter but as diverse playmakers carrying and catching the ball – should be right up Stefanski’s creative alley.

“I just like the way he likes to run the game through the backs and stuff like that,” Hunt said. “He likes to find ways to get the backs the ball. We are going to find out here in about five days.”

Chubb said of having he and Hunt on the field together, “I think it gives the defense a hard time having to plan for us and scheme for us because they do not know what we are going to do and they do not know how we are going to be used or utilized in the system. I think it can be special if we find the right way to utilize us, keep us both on the field or have certain plays for both of us.”

What will be the identity of the Browns under Stefanski?

I thought about that on Wednesday, the first big practice day of the regular season.

Baker Mayfield had his usual press conference to kick-start the work week and said nothing of note, no bluster about Super Bowl expectations or anything else.

There was no Beckham available to drum up drama about wearing gaudy, expensive watches or attention-grabbling clown shoes or complaining about officials singling him out.

What there was was Chubb and Hunt talking about winning and selflessness and team.

There has been an eerie quiet about this Browns’ season. No national buzz whatsoever about a roster that is quite easily the most stacked in the 22 years of the Browns’ expansion history. The stone silence is a stark contrast to the hyper-attention that suffocated the team last year.

“I like not having the noise around us,” Chubb said. “They can just take it somewhere else. Let us focus on ourselves. Let us keep playing.”

We’re going to learn soon what is Stefanski’s vision of his offensive team.

I see it as Chubb and Hunt.