At The End Of A Maddening Day, Rashard Higgins Made A Play To Win A Game And Keep The Browns’ Season Alive 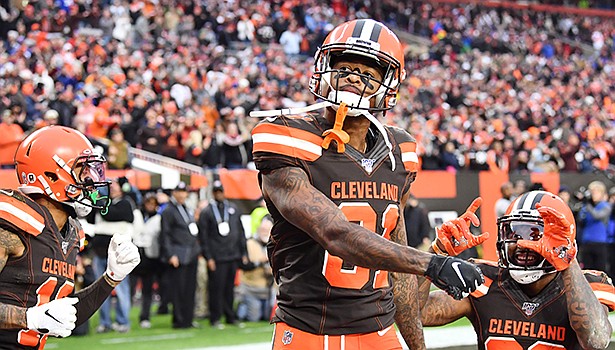 The Buffalo Bills have a knack for bringing out drama in the Browns, and this maddening game put everyone through a gamut of emotions.

There was disgust and exasperation most of the day, elation at the end, and finally immense relief.

The Browns overcame a lot of things, mostly themselves, and came away with a win they desperately needed, 19-16, over the Bills. It halted a four-game losing streak overall and kept alive hopes to make a belated run at the relevancy always expected of them.

“I think we showed that we can come out and win a critical game when it is a tight situation and be able to make the plays we needed to,” said Baker Mayfield (26 of 38, 238 yards, two touchdowns, no turnovers), who delivered a game-winning drive in the clutch. “We needed to have that. Moving forward, we know that we can do that.”

The Browns are 3-6 and have some confidence after their first win at home and now prepare in a positive frame of mind for the Pittsburgh Steelers’ invasion on Thursday night. It’s the next critical, crucial point of their season.

“There is time left just because there are more games, but we need to worry about right now,” said coach Freddie Kitchens. “We have to get ready to play in four days, and that is the only thing we are focused on.”

On a day the Browns introduced their dynamic running back tandem of Nick Chubb and Kareem Hunt, and targeted receivers Odell Beckham Jr. and Jarvis Landry 22 times, the hero of the day was Rashard Higgins.

The forgotten Mayfield security blanket was targeted only one time. He spun around cornerback Levi Wallace in the end zone and caught the winning touchdown from 7 yards with 1:44 to play.

It was the 11th time the Browns ran a goal-to-go play in this game and the only time they crossed the goal line.

Higgins, who has been injured and seemingly in the doghouse all year, said he was awakened at 5 o’clock in the morning by a dream of catching the game-winning pass. It was his first meaningful reception since the opener.

“It felt amazing,” he said. “We never gave up. That’s in our character. It was a long game and a lot of stuff wasn’t going our way.”

True. And it wasn’t over with Higgins’ touchdown, which was set up by a timing pass from Mayfield to Jarvis Landry on which Landry turned the right way to snatch the ball at the sideline at the 7 as Mayfield was getting way-laid to the ground.

The Browns still had to survive a final surge by Josh Allen who was tossing 100 mph fastballs all day and rushed for two touchdowns. Allen’s 41st pass was defended by Denzel Ward – who had a great game – at the 35.

After trying to induce a Browns offside on fourth-and-4, Buffalo coach Sean McDermott called time and tried a game-tying field goal from 53 yards. Stephen Hauschka’s effort to the Dawg Pound end zone was feeble, just as was a 34-yard miss earlier.

“We didn’t play perfect by any means,” Mayfield understated.

“We did enough to win,” said defensive tackle Sheldon Richardson. “We just need W’s at this point.”

The Browns dominated the game from the start, but couldn’t finish drives. While they kept penalties (four) and turnovers (zero) at a minimum, they looked unconfident throughout the day after missing a PAT following their quick first touchdown.

They had one sequence of eight plays from the Bills’ 2- or 1-yard line, including two interference penalties drawn in the end zone by Beckham, and failed to score. Chubb was stopped five times short of the end zone.

Incredibly, it happened again in the second quarter from the 3, the 1 and then the 3 again. Chubb was stopped twice in that sequence. Kitchens was going to go for it again on fourth down, but right tackle Chris Hubbard false-started – not on purpose, he swore – and Kitchens sent Austin Seibert out there for a 27-yard field goal.

He would be wise to fall back on the Chubb-Hunt tandem next time. As productive as it was throughout the game, the two determined backs lined up on the field together only one time in the 10 unsuccessful goal-to-go plays.

Otherwise, the tandem was unstoppable.

In his first game in a Browns uniform following an eight-game NFL suspension and release by the Kansas City Chiefs a year ago, Hunt debuted as a lead blocker that sprung Chubb for a 21-yard blast. Hunt also carried the ball four times for 30 yards, had seven receptions on nine targets – including one for nine yards on a key third-and-7 conversion on the winning drive – and was an inspiration to Chubb and his teammates.

Despite the hiccups near the goal line, Chubb had 116 yards rushing on 20 attempts.

“My mindset was any time I can make the play, I’m going to do it,” Hunt said. “There’s not enough words to describe how I felt out there. It was so emotional. Sometimes I was just thankful, sad. Couple times I felt I was going to shed a few. I couldn’t be happier to be home, too, and bring a home win to the Browns.

“Honesty, I feel I’m the same player I was. It’s pretty natural. I go out and play with a lot of effort and heart and shoot, 24 does, too. We’re both going to go out and lay it on the line together.”

This was the first time the Browns grinded out a win with things going wrong.

They gave up a safety when the Browns shited into an empty backfield and Mayfield was sacked in the end zone.

The Bills dropped an interception at the Browns’ 45 in the fourth quarter when cornerback Tre’Davious White and safety Jordon Poyer collided.

The day almost looked lost when a Mayfield shovel pass went through Hunt’s arms and was picked up and returned 35 yards for an apparent Buffalo touchdown. But the play was reversed correctly and ruled an incomplete forward pass.

So even the obligatory botched shovel pass worked in the Browns’ favor. Because Mayfield and Hunt and Chubb and Landry and, finally, Higgins were able to make plays over the next five snaps to pull victory out of the jaws of defeat.

“It was amazing,” said Beckham, who had only five catches on 12 targets. “It’s everything [the home fans] have been waiting on. For this team to not quit, not fold and do that, to get a tough win against a good team … we played a very, very good team. We did everything we needed to get the win today.”