Now What Do The Browns Do With Their Latest Would-Be Offensive Superstar, Kareem Hunt? 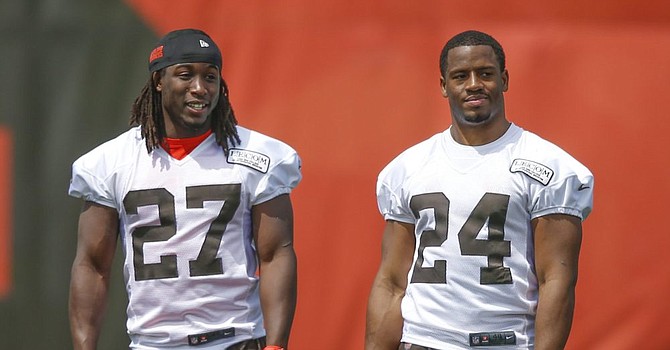 Kareem Hunt looks to join one of the NFL's top rushers in the Browns backfield.

On Wednesday, Baker Mayfield spent 15 minutes in front of the media firing squad deflecting questions about why the offense has underperformed for the majority of eight games.

“We have to stay the course,” the Browns’ quarterback said about five times.

And now, here comes Kareem Hunt into the equation.

They haven’t figured out how to get the ball consistently to Odell Beckham Jr. and Jarvis Landry, or how to integrate Rashard Higgins, Mayfield’s personal security blanket a year ago.

And now there’s Hunt, too.

They haven’t figured out how to maximize Nick Chubb, one of the NFL’s premier backs, and force themselves to hammer Chubb near the goal line to solve their red zone woes.

They can’t explain why they keep forcing the ball to drive-killers Antonio Callaway, Demetrius Harris and Dontrell Hilliard. Game after game, these are the players getting the ball in critical situations and fumbling the opportunities with penalties, deflections turned into interceptions, and missed routes and assignments.

Yes, the long wait is over for Kareem Hunt. Reinstated from NFL suspension and finishing his third week of practice, the former NFL rushing champion and John Dorsey reclamation project is ready to play Sunday against the Buffalo Bills.

What could go wrong?

More importantly, what could go right?

They have a plan: Hunt last played in a meaningful game for the Kansas City Chiefs on Nov. 19, 2018.

Eleven days later, the Chiefs released Hunt when a video published by TMZ proved Hunt was untruthful to his employer about the unsavory events in a Cleveland apartment complex nine months earlier. The video showed Hunt shoving and kicking a woman, which was not what Hunt said happened.

In February, Hunt was rescued from his short oblivion by Dorsey, who drafted him for Kansas City in 2017. In March, the NFL handed down an eight-game suspension for violations of the player conduct policy. Hunt participated in the Browns offseason program and training camp and played sparingly in the preseason games.

He had sports hernia surgery on Aug. 29, was OK’d to return to practice on Oct. 21, and was reinstated on Monday.

“He will definitely have a role,” said coach Freddie Kitchens.

“We are hoping for an immediate impact,” said Mayfield.

At his best for Kansas City, Hunt was dynamic running with the ball, whether handed or thrown to him.

As a rookie in 2017, Hunt led the NFL in rushing with 1,327 yards and added 455 on 53 receptions. He had eight touchdowns rushing and three receiving. That was the year Patrick Mahomes sat behind veteran quarterback Alex Smith.

In 2018, with quarterback Mahomes setting the NFL ablaze in his MVP season, Hunt had 824 rushing yards and 378 receiving through 11 games. He scored 14 touchdowns, seven each running and receiving.

I asked Mayfield if he considered Hunt a more valuable asset in the running game or the passing game.

“I would say Kareem is just an all-around great player,” he answered. “We will see as the week pans out with what we want to do to utilize him. I think he does both the passing game and the running game. He is a threat in both.”

Solution or complication?: At first glance, Chubb would appear to lose some game reps as a result of Hunt’s arrival.

But Chubb, the consummate pro and teammate, the most selfless player to wear a Browns uniform since Earnest Byner, claims he could care less how Hunt’s arrival affects his play time.

“I can do whatever,” he said. “I can play the role of being the main guy or sharing carries. Like in college, the first part of my career I carried the load, and in the second part, I split carries [with Sony Michel] and that is probably more beneficial for the whole team. It is all about the team for me. Whatever we can do to win, I am all for it.”

I asked guard Joel Bitonio if Hunt’s arrival complicates the Browns’ offensive issues or solves them.

“I don’t think it complicates anything,” he said. “I think anytime you can bring in another talented player, it adds another option. He’s catching passes, blocking, running … it gives us another playmaker to get the ball in his hands.”

I don’t see Chubb and Hunt as the reincarnation of 1985 1,000-yard backs Kevin Mack and Byner, with one lead-blocking for the other. But I do see them both on the field together, with Kitchens motioning one or the other into a flex position or in the slot or lined up wide as a receiver. Or maybe keeping them both in the backfield and giving Mayfield options to hand off or throw off a play-fake.

“It will just mess with their eyes a little bit,” Chubb said of opposing defenses. “They will not know what we are doing if it is a run or if it is some type of pass. They will have to think for a split second and that is all we need to get the play going and make something happen.”

Bitonio said, “They’re both weapons … honestly, we have some stuff planned. We can’t divulge too much. I think it’s exciting to just get another weapon out there. You have both guys on the field, or one on the field and the other one resting, You’re going to get the best version of each guy.”

No team in the NFL has a pair of premier running backs like Chubb and Hunt.

I think a Chubb and Hunt tandem could be dynamite.

Of course, I thought a Landry and Beckham tandem would be dynamite.