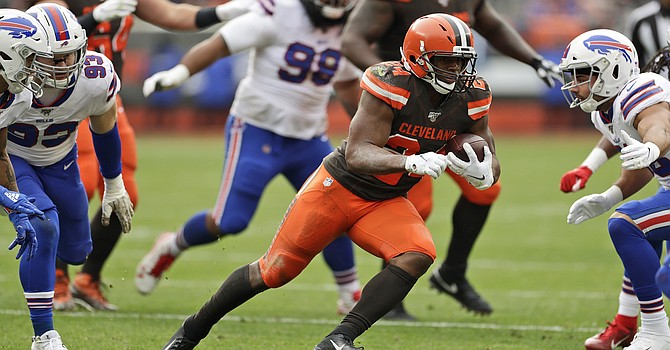 Nick Chubb and Kareem Hunt lead a strong run game vs the Bills.

1. Whew: The Browns have a life, but barely. They survived a stressful, bizarre afternoon and escaped with a 19-16 victory over the Buffalo Bills in a game they seemingly dominated but kept making mistakes. Capping off the theatrics, the winning touchdown came on a 7-yard touchdown from Baker Mayfield to Rashard Higgins – his first play of note since he was hurt in the opener. Early in the game, the Browns had 13 snaps inside the Buffalo 3-yard line on successive possessions – along with three penalties, two on the Bills -- and came away with only three points. They also missed an extra point. It appeared the Browns had put their fans out of their misery when a Mayfield shovel pass went through Kareem Hunt’s hands and was returned 30 yards to the end zone by Buffalo. But it was correctly ruled an incomplete forward pass. Mayfield then completed the winning drive, 82 yards overall in 10 plays. The defense made a stop at the Browns’ 35-yard line. Stephen Hauschka’s 53-yard field goal try into the Dawg Poung with :17 left was short and wide left. The victory snapped a four-game losing streak for the Browns (3-6) and was their first at home. Here come the Pittsburgh Steelers for a Thursday night special.

2. Can’t make this up: The Bills went ahead with 5:26 to play on a typically bizarre sequence. It looked like the Browns’ defense would get the stop – twice. First, Josh Allen converted a first-and-20 with a 26-yard rope to Cole Beasley. Then he had third-and-1 from the Browns’ 11. Allen took off for the goal line and had the ball stripped from behind by Sheldon Richardson at the 7. The ball was recovered by Buffalo offensive lineman Jon Feliciano at the 1 for a first down. Frank Gore was stopped short on first down and then Allen sneaked it over. Stephen Hauschka’s extra point made it 16-12, Bills.

3. Not smart: The Browns’ first possession of the second half began at their 8-yard line. They had power run personnel on the field and then motioned out of it, leaving Mayfield alone in the shotgun with a spread formation. Buffalo safety Tremaine Edmunds raced around Greg Robinson and felled Mayfield in the end zone for a safety. That tied the game, 9-9.

4. Save that script: The Browns received the ball first and their offensive script was interesting – and effective. They threw deep for Odell Beckham Jr. on the first play (overthrown). On second down, Kareem Hunt came on and he lead-blocked for Nick Chubb (21-yard run). Two players later, Chubb and Hunt were joined on the field by No. 3 back Dontrell Hilliard, and Mayfield completed a pass to Hunt for seven yards. Then, Mayfield ran a bootleg to the left – when have we ever seen that? – and connected with Jarvis Landry for 18 yards. Mayfield finished the snappy TD drive with a bullet to Landry, who pulled it in from 17 yards out. Landry promptly stood up and taunted cornerback Levi Wallace in his face, drawing an unsportsmanlike conduct penalty. The Bills took the 10 yards on the extra point, and Austin Seibert’s PAT – from 48 yards – was missed wide right. That is never a good thing.

6. Not again?: So, in the second quarter, the Browns got down to the Bills’ 3-yard line. We take you to the action: 1. First-and-goal, 3y: Landry catch for 2 yards. 2. Chubb toss, minus-2. 3.Third-and-goal, 37: Mayfield incomplete (shovel) for Chubb. 4. Browns lined up in empty formation with a four-man bunch formation to the left. Chris Hubbard false start. 5. Fourth-and-goal, 8y: Austin Seibert, 27y field goal.

7. Veteran move: Hubbard’s false start actually did Kitchens a favor, for the coach intended to go for it again on fourth down after failing and coming away with zero points earlier. Mayfield appeared to try to convince Kitchens to go for it, but common sense prevailed. So, between the two series, the Browns wound up snapping the ball 13 times inside the Bills’ 3-yard line and had a total of three points, as a result. Officially, the Browns had six snaps from the 2-yard line or closer without scoring. That’s the first time in 26 years that’s been done by an NFL team, per Elias Sports Bureau.

8. Oops: After the first Bills goal-line stand, the Browns’ defense forced a 3-and-out and punt from the end zone. Hilliard fumbled the punt, but recovered at the Browns’ 27. The five-yard loss was a setback, however, and the Browns had to punt. Buffalo moved 76 yards in nine plays for a touchdown. Josh Allen made two big plays on quarterback draws, one for 12 yards and then one for 10 yards for the touchdown.

9. See there: Seibert has now missed three PATs into the Dawg Pound end zone. Phil Dawson will tell you that’s not an easy kick. Buffalo kicker Stephen Hauschka missed a field goal from 34 yards at the end of the first half.

10. Call him a cab: Wide receiver Antonio Callaway was a surprise inactive for the game, a healthy scratch for the first time in his 1 ½ seasons with the Browns. In the four games since returning from a four-game NFL suspension, Callaway had eight catches for 89 yards. If you take away a 41-yard gain in the Denver game, Callaway’s numbers are seven catches for 48 yards. He also has two penalties and a deflection off his hands at the goal line against San Francisco that was intercepted just before halftime. So the Browns finally held Callaway accountable for poor play. Callaway’s place on the inactive list was a consequence of Hunt’s return. The Browns kept all four running backs active. Also inactive was defensive end Olivier Vernon (knee). The Browns gave Chad Thomas his first NFL start in Vernon’s place.