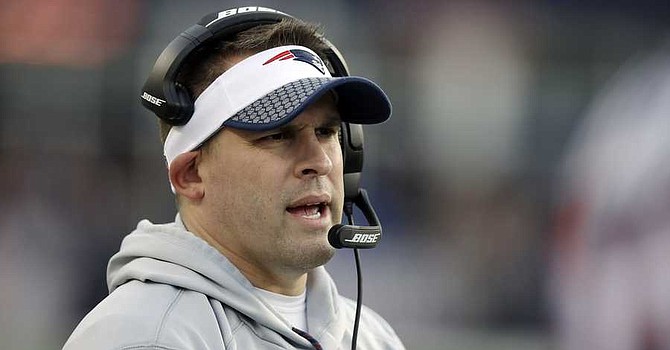 Josh McDaniels' only hope of landing a head coach position this year is with the Browns. (AP)

The ninth day of Jimmy Haslam’s fifth head coaching search started ominously. But when the dust settled, the Browns had to feel they were in good shape despite being the only team left without a coach.

Here’s what happened on Tuesday:

Rhule was assumed to be the No. 1 target of the New York Giants. But barely an hour after losing out on Rhule, the Giants made an equally surprising choice in filling their coaching vacancy with Joe Judge, New England Patriots special teams coordinator and receivers coach.

A few thoughts on what all of this means to the Browns:

McDaniels had interviews lined up with the Panthers and the Giants. Their cancellations now leave him with only one choice – the Browns – if he wants to jump the sinking ship in New England. McDaniels, of course, can elect to stay with the Patriots, too.

Speculation has been all across the board over what McDaniels may or may not demand to leave the Patriots. If nothing else, you have to assume his leverage has been severely limited in demanding anything. Haslam already has said his next coach will assist in the search for a compatible general manager, but will not have final say on that hire. McDaniels has been linked to former John Carroll University teammates in New England’s personnel department, Nick Caserio and Dave Ziegler. But he also may have someone else in mind.

McDaniels has been portrayed as Haslam’s No. 1 choice. Stefanski has been portrayed as No. 1 choice of Paul DePodesta, chief strategy officer, who is leading and organizing the coaching search. Unless the coming interviews change those views, it’s possible Haslam could be faced with ignoring DePodesta’s recommendation for the third time in a row. DePodesta favored Sean McDermott over Hue Jackson and Stefanski over Freddie Kitchens. Haslam chose the other candidate each time.

Schwartz, a late addition to the coaching search, could be a compromise choice. He has the most head coach experience (29-52 in five seasons as Detroit Lions coach), has long been an advocate of analytics-enhanced decision-making, and was an entry-level research assistant and personnel scout for the Browns under Bill Belichick (1993-95). Although Schwartz coached the Lions to one playoff appearance three years after inheriting an 0-16 team, his best coaching has been as defensive coordinator with Tennessee (2001-08), Buffalo (2014) and Philadelphia (2016-19).

Stefanski (Vikings offense) and Saleh (49ers defense) will match wits when their teams play in the NFC divisional round on Saturday. If the Browns are still seriously considering the winner of that coaching confrontation, they will have to wait at least another week to extend an offer.