Josh Mcdaniels Interviewed For Seven Hours, Then Left Without A Browns Contract 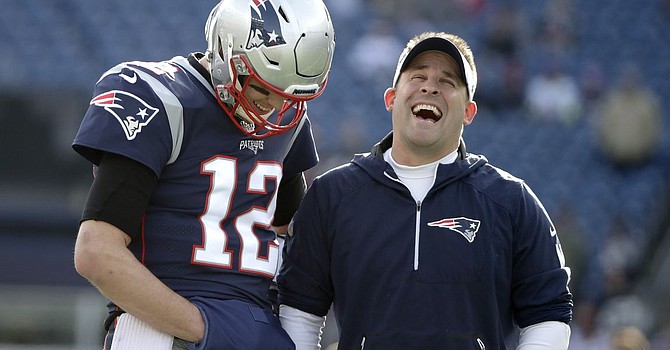 Seven hours of interviews were not enough to clinch a deal between Josh McDaniels and the Browns. (Ap Photo/Elise Amendola)

More than seven hours of up-close interrogation and discovery with Josh McDaniels – their eighth and final coaching candidate – failed to produce a decision by the Browns on Friday.

McDaniels and his wife, Laura, arrived at the Browns headquarters at about 10 a.m. after being transported from the Boston area aboard owner Jimmy Haslam’s private jet.

They departed the building at about 5:30 p.m. without an agreement to coach the Browns and lead the team’s football reorganization.

A team source indicated there are no new interviews scheduled and “possible” decisions could come over the weekend.

While it would seem the Browns should have a clearer picture of their next coach by now, it may be more complicated than simply choosing a head coach.

Haslam has said the next coach would contribute to the search for a general manager, but would not have the final say on that hire. Haslam also has said the GM would have authority on the 53-player roster, and that both the GM and coach would report directly to the owner.

It’s possible that McDaniels – or another highly rated candidate – proposed a conflicting vision of the makeup of Haslam’s next football organization.

The coaching search has been organized by Paul DePodesta, Browns chief strategy officer, whose contract with the Browns reportedly is expiring, making his future role uncertain – depending, perhaps, on which coach Haslam selects.

So Haslam, who is hiring his fifth head coach and general manager in eight years, may be contemplating one organization path v. another – as much as one coach v. another.

McDaniels has always been viewed as Haslam’s preferred choice. He interviewed him in 2014 and nearly hired him. But when he delayed, McDaniels took himself out of the process.

McDaniels is a native of Canton and the son of legendary high school coach Thom McDaniels. He played wide receiver at John Carroll University. As an NFL coach, he earned six Super Bowl championship rings in nine appearances with the New England Patriots, mostly as Bill Belichick’s top offensive assistant.

McDaniels’ wife is a native of Parma and there is a strong feeling that raising their four children – aged 6 to 15 – in Northeast Ohio closer to their grandparents is a strong attraction for the Browns’ job.

But McDaniels also is a firm believer in having the trust and authority from an owner in order to succeed. It’s possible he may have demands that other candidates in the Browns’ process do not – and those may have caused Haslam to pause from making a decision.

Stefanski, Saleh, Roman and Bieniemy each is involved in the NFL divisional playoffs this weekend, and couldn’t be offered the job – or even communicated with by the Browns – until their seasons are done.