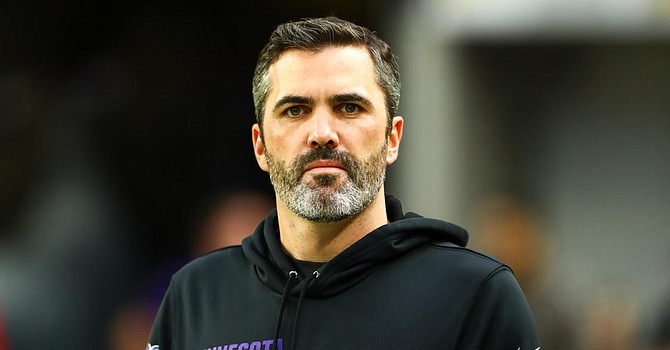 Paul DePodesta had Kevin Stefanski as his top Browns coaching choice last year, and waited a year to reel him in. (cbssports.com)

Early takeaways from the conclusion of the Browns coaching search …

1.Everything about Jimmy Haslam’s latest organization makeover has to do with the re-emergence of analytics as the basis for all Browns football decisions. It was the biggest reason for John Dorsey’s demise as GM, more so than his mis-evaluation of Freddie Kitchens as a head coach. Dorsey grew increasingly weary and mistrustful of interference in football matters by the analytics department, led by Paul DePodesta. Haslam would have been uneasy, at best, with the growing friction if the team had met internal expectations. The fact the season went down the tubes ended Haslam’s trust in Dorsey.

2.Kevin Stefanski was the front-runner in the coaching search all along. Paul DePodesta, chief strategy officer, identified him last year as the best candidate. This year, Stefanski was an even stronger candidate in a more expanded field. In DePodesta’s mind, Stefanski’s professional growth expanded immensely in one season under Minnesota Vikings offensive consultant Gary Kubiak.

3.The only way Josh McDaniels would win out was for Haslam to choose McDaniels’ vision of the football organization over DePodesta’s. Even though McDaniels embraces analytics in the Patriots Way, there was a difference in his vision. Much was made about McDaniels not being able to co-exist with Dorsey. In truth, he was never going to co-exist with DePodesta. Haslam had to be traumatized by ignoring DePodesta’s previous two coaching recommendations – Sean McDermott over Hue Jackson, and Stefanski over Kitchens. McDaniels would have had to bowl over Haslam in the interview to win his total trust because it would have most likely resulted in DePodesta leaving the organization. In that vein, Haslam chose DePodesta over McDaniels.

5.You can find a lot of football people who will praise Stefanski for his intelligence (another Ivy Leaguer, from Penn), his football acumen, his collaborative nature, and his desire to expand his decision-making through the use of analytics. But the big unknown is his ability to lead a full team. “Players want leadership,” Haslam said after conducting exit interviews with “25 to 30” of the team’s core players. “They really do want strong leadership. We are looking for a strong leader, one.” And that probably was the No. 1 quality that Saleh brought to the table.

6.Another potential weakness of Stefanski could be his ability to assemble a staff. He has been with the Vikings for 14 years in various capacities, and that might limit his network of potential assistants. Although ex-Browns and ex-Giants coach Pat Shurmur is being mentioned as a potential offensive coordinator by some because of their time together as Vikings assistant coaches (2016-17), a more likely candidate to join Stefanski is Klint Kubiak, son of Gary Kubiak, who has coached receivers and quarterbacks in two stints with the Vikings wrapped around three years in Denver. There have been no potential defensive coordinators associated with Stefanski publicly. But you would figure Mike Priefer would be a strong bet to continue as Browns special teams coordinator. Priefer held that position for eight seasons with the Vikings with Stefanski in various offensive roles during the entire time.

7.It’s almost considered a fait accompli that Andrew Berry will now return to the Browns in a GM-like capacity. Berry expanded his career in one season with the Philadelphia Eagles and meshes well with DePodesta and Stefanski to form an all-Ivy League trio in charge.

8.Berry may be scarred in the minds of Browns fans by being part of the DePodesta-Sashi Brown regime that gutted the roster and made several mistakes in the draft in 2016-17 – passing on quarterbacks Carson Wentz, Patrick Mahomes and Deshaun Watson; selecting receiver Corey Coleman, etc. But Berry was not in a position of authority at the time. As to the obvious question to Haslam of why does he think this analytics-centric system will work now when it didn’t work in 2016-17, I would expect the answer to be this: “We didn’t have the coach to embrace the system before as we do now.”