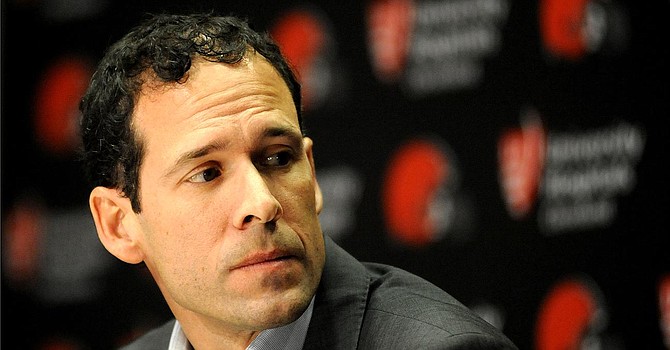 Chief strategy officer Paul DePodesta is back in power after Jimmy Haslam fired GM John Dorsey. (Waiting for Next Year)

The Browns completed the decade under the Jimmy Haslam ownership with no coach, no general manager and a probable return to football run by analytics.

Haslam has blown up his football operations department once again by parting ways with General Manager John Dorsey in a power play won by Paul DePodesta, the La Jolla, CA-based chief strategy officer.

The abrupt ending for Dorsey came after he requested a meeting with Haslam to clarify his position.

Dorsey had become increasingly irritated by interference in football matters by DePodesta in recent weeks. Dorsey also wanted to give his hand-picked coach, Freddie Kitchens, another year to grow into the job, according to a source.

But when Haslam fired Kitchens on Sunday night and then began planning a coaching search without Dorsey’s input, Dorsey pressed the issue and was informed by Haslam of a lesser role for him and a greater one for DePodesta.

In a statement released by the Browns, Dorsey said:

“When I took this job, the history of this storied franchise and the passion of our fans was an integral part of my decision. It is that same understanding and desire to see these fans enjoy the success they are so deserving of that helped me conclude, along with Jimmy and Dee, that it was best to part ways as they embark on the search for a new head coach. I know how critical the relationship is between a general manager and head coach and I also know how critical it is that the Browns have a strong leader in their next coach. I have a great appreciation for the men and women I have worked with since being in Cleveland and my family has the same love and appreciation for this community and are thankful for the opportunity to be a part of this journey.”

The Haslams made no reference to DePodesta or their reorganization plans in their statement.

"We have a great appreciation for John and all he has done with the Cleveland Browns. He has helped create a foundation that we need to continue to develop and build upon. While John helped greatly improve our team’s talent and we are excited about the core players on our roster, we fully recognized that our team did not meet its potential on or off the field and additional changes in leadership give us the best opportunity for success in the future. As the role of the general manager continues to evolve in this league we felt there were areas that needed to be reassessed. Over the last 48 hours, we’ve had discussion with John about his role but could not come to an agreement on a position that would enable him to remain with the organization.

“As we conveyed on Sunday and our players reiterated yesterday, bringing in a strong leader with our head coach is our priority. Our process to improve upon the leadership will allow the flexibility to ensure we create the best partnership between our future head coach and general manager. We know the road of our tenure as stewards of this franchise has been a test of patience as we all want the success that our fans so deserve and we are relentlessly committed to and working towards. We fully appreciate, understand and empathize with our fans as we work towards our ultimate goal of building a championship-level football team.”

Dorsey and DePodesta were involved in a tug-of-war over the naming of Hue Jackson’s full-time successor last January. Dorsey barely won it when Haslam sided with Dorsey’s choice of Kitchens over DePodesta’s choice of Kevin Stefanski of the Minnesota Vikings.

Kitchens floundered in his first season as Browns coach with a 6-10 record, while Stefanski helped the Vikings make the NFC’s sixth playoff seed as their offensive coordinator.

When the Browns made Stefanski a candidate for the job again this year, it was a tip-off that DePodesta had risen from the ashes to position himself to the authority he held alongside former GM Sashi Brown in the 2016-17 seasons.

The rise from the ashes of DePodesta was panned by several NFL sources.

One said, “We don’t really know why, but the Haslams’ dedication to Paul DePodesta is stronger than to anyone in the football industry. This means whomever accepts the coaching job has to answer to someone in San Diego.”

The Haslams did not detail their reorganization plans, but it is assumed DePodesta will oversee the football operations department from his home base in California.

Alonzo Highsmith, vice president of personnel, is believed to be leaving the organization for a still-to-be-named position with a college football program.

A source said that Eliot Wolf, Dorsey’s assistant GM, has not had a change in his status.

It’s possible that Wolf would remain but now report to DePodesta. Another possibility is the return of Andrew Berry, 31, who left in February as Browns vice president of player personnel under DePodesta-Brown to join the Philadelphia Eagles.

In the meantime, the Browns are amping up their coaching search.

Cleveland.com reported they will interview former Packers coach Mike McCarthy on Thursday. McCarthy has marketed himself as an analytics-friendly coach in his year off and was never seriously considered in Cleveland by the Dorsey regime. A source said he’d make few demands and probably would fit much better with Dorsey gone.

The rise of DePodesta, however, could result in scaring off Josh McDaniels, Patriots offensive coordinator and a perennial coaching target of Haslam.

The Browns have received permission to interview McDaniels, but it can’t be done until after the Patriots’ wild card game this weekend.

Other head coach candidates pursued by the Browns:

There is the possibility Jimmy Haslam will address his reorganization plans with media on Thursday. Nothing has been scheduled yet, however.