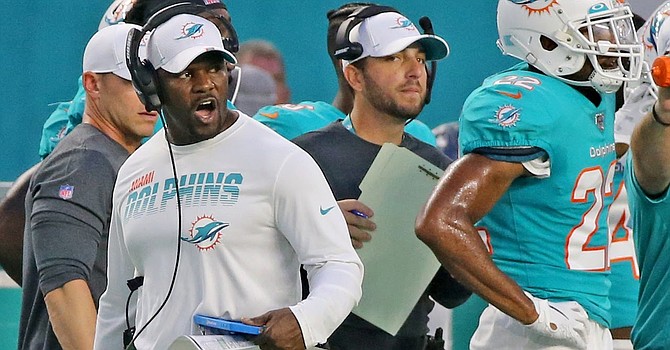 In a no-win situation, Brian Flores has two coaching wins in his first season with the Dolphins.

1.First-year coach Brian Flores is the latest branch of the Bill Belichick tree to break out on his own. None of the others has been cast in such a dire situation. Belichick’s last defensive coordinator took over a dysfunctional Dolphins franchise so desperate that it looked up to the Sashi Brown model of team-building, a.k.a tanking. The early stages of the plan inspired several quality players to jump ship, forcing an escalation of the plan that not even Brown endeavored. Essentially, Flores was given a roster built to lose. The fact that he’s won two games – and had the Steelers on the ropes for one half -- and has steadied the ship has earned Flores deserved praise and encouragement. Maybe he will even last long enough to reap the rewards of his labors. The Dolphins are 28th or lower in all major offensive categories, 20th or lower in all defensive categories, last in defensive takeaways (seven) and tied for 28th in giveaways (20) for a league-worst minus-13 turnover differential. On a positive note, the Dolphins have committed a league-low 55 penalties accepted – a whopping 32 fewer than the Browns.

2.Besides the purposeful tanking, Flores has had to navigate the typical issues that cross the desk of a rookie head coach for the first time. Case in point: Mark Walton, the team’s leading rusher with 201 yards, was upended by a four-game drug suspension, and then was waived this week after Davie, FL, police charged him with aggravated battery of a pregnant woman, his girlfriend. It looks like the starting running back Sunday would be Kalen Ballage, who has a 1.9-yard average on 64 rush attempts.

3.The only thing left for the Dolphins to do to preserve more losses is bench veteran quarterback Ryan FitzPatrick for 2018 draft bust (via Arizona) Josh Rosen. Rosen was so bad in his third start, he was benched against the anemic Redskins. He is expected to get a couple more starts before the year is over. Meantime, FitzPatrick is still capable of having a hot hand on any given Sunday. In throwing for 288 yards against the Gregg Williams Jets, FitzPatrick became the first quarterback in history to win a start for seven different teams. He has defeated the Browns five times with three clubs – the Bengals in 2008, the Bills in 2010 and 2012, and the Jets in 2015 and 2016. FitzPatrick is 5-1 against the Browns, losing in ’08 with the Bengals.

2.The Dolphins own 14 picks in the 2020 draft, including three in the first round (Dolphins, Steelers, Texans) and two in the second. They own two firsts in 2021 (Dolphins, Texans) and two seconds. They also will enter the 2020 transaction season with a league-high salary cap space between $100 million and $128 million.

3.The Dolphins and dwindling fan base were dealt a blow last week when Alabama quarterback Tua Tagovailoa suffered a major injury to his hip that required surgery and ended his college season. It was assumed the Dolphins were zeroing in on Tagovailoa as their franchise quarterback in the 2020 draft. That still could happen – the Dolphins currently own pick No. 4 overall – but Tagovailova’s rising durability concerns throw another wrench in the team’s decision-making process.

4.Jason Sanders is the second kicker to execute a successful onside kick this year. He recovered his own kick against the Buffalo Bills.