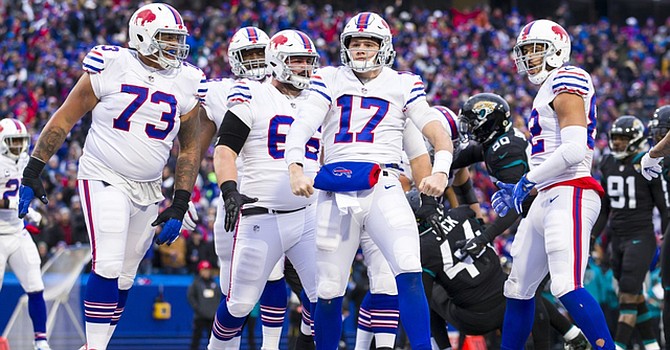 Josh Allen and the Bills defense have brought them a winning record thus far.

1.Are the Bills at 6-2 playoff-bound or paper tigers, beneficiaries of a weak schedule with five wins against teams (Jets, Giants, Dolphins, Bengals, Redskins) with combined record of 5-37? We may not find out until the playoffs. Ten wins should net them a wild card. They have two more games with the Jets and Dolphins, in addition to the Browns and Broncos.

2.The Bills would get more respect if quarterback Josh Allen were the reason they won games. He’s not. Not yet. They win with a very sound defense and generally don’t beat themselves. That’s a good combination to get above water. But until Allen is the reason for winning they are going to be doubted.

3.In his second season, Allen has benefitted from the coaching of coordinator Brian Daboll. Allen’s completion percentage has risen from 52.8 as a rookie to 60.9. Daboll has him taking the underneath stuff to boost that percentage. Allen is plagued by a pedestrian receiving corps of basically John Brown and Cole Beasley and improving rookie tight end Dawson Knox.

4.Daboll is not afraid to use Allen, who is 6-5 and 237 pounds, as a runner. While no Lamar Jackson, Allen’s 61 rush attempts rank third among quarterbacks (247 yards and four touchdowns). Allen has fumbled nine times, but has made many more plays on planned runs in the red zone and in short-yardage. He also is very good at using his athleticism to escape pressure and make plays as a result.

5.McDermott is a former Eagles defensive coordinator who doesn’t believe in blitzing much. He tries to create pass rush with his four down linemen. The strength of the defense is an outstanding secondary, led by cornerback Tre’Davious White, and a good pair of safeties in Micah Hyde and Jordan Poyer.

1.We are seeing the end of the line for the remarkable career of 5-9 running back Frank Gore. At 36 and in his 15th season, Gore’s 15,185 rushing yards are fourth all time and he needs 85 to pass Barry Sanders for third. Gore still tops the Bills in rushing this season (437 yards, 4.1 average), but he has given way to rookie Devin Singletary as the feature back.

2.Although Josh Allen hasn’t really posted a “signature” performance in his 19 NFL starts (11-8), he has made seven game-winning drives in the fourth quarter in his 11 victories, including four this year.