Browns Win Third In A Row Over Depleted Dolphins 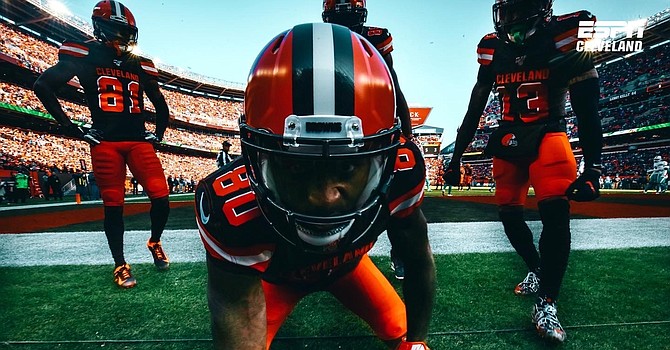 Jarvis Landry had a career day against his old team on his birthday.

Instant takeaways from the Browns’ 41-24 over the Miami Dolphins …

1. Be gone, Dolphins: The nuisance trap game against the Miami JV team passed without incident, setting up the Browns’ rematch in Pittsburgh. The Browns were hardly mistake-free, but the Dolphins were worse, resulting in a 41-24 Cleveland triumph. Style points don’t matter, of course, and the Browns are in no position to quibble with their third win in a row – all at home – to rise to 5-6. Baker Mayfield continued to sharpen his game with three touchdowns, two to Jarvis Landry and one to Odell Beckham Jr., marking the first time the boyhood pals scored together in the same game for the Browns. Mayfield was 24 of 34 for 327 yards and a 118.1 rating. His one interception, ending a streak of 157 passes without one, came on a short pass behind Beckham in the third quarter. Nick Chubb had 106 yards and one touchdown on 21 rush attempts. Linebacker Joe Schobert had two interceptions of one-time Browns nemesis Ryan Fitzpatrick. Schobert has four interceptions the past two games. The Browns ran out to a 28-0 lead. The Dolphins scored three touchdowns in the second half, drawing as close as 28-17 after three quarters. The Dolphins are 2-9.

2. Jarvis’ day: It was obvious early on that the Browns were intent on making the day fun for Landry against his former team. His touchdowns were from 7 and 5 yards. Landry was targeted 13 times, and caught 10 for 148 yards. During the week, Landry said he circled this game on his calendar when the schedule came out. He had nobody to vent at, however. He was traded by GM Mike Tannenbaum, since fired, and feuded with coach Adam Gase, since fired.

3. Nitpicking: Despite the lopsided score, the Browns lacked style points for their offensive showing. In the first half alone, they had five offensive penalties, one errant snap when Mayfield wasn’t looking, one botched trick play when a pitch to Hunt hit the ground, and one blown timeout because of confusion getting players lined up. Of course, this mattered little because of the depleted Dolphins roster. In the first half, Mayfield was 16 of 18 for 198 yards, three TDs and a 152.1 passer rating.

4. Whoops: Mayfield was intercepted on his first possession of the second half when his short throw behind Odell Beckham Jr. was stolen by cornerback Ryan Lewis. It was Mayfield’s first interception after 157 consecutive passes – fourth-longest streak in franchise annals.

5. Thanks, Fins: Despite their own miscues, the Browns were able to build a 28-3 lead. Assistance came from the Dolphins, who, despite leading the NFL with the fewest penalties coming in, drew six flags in the half, including three pass interference calls. One of the PI’s came on a replay reversal initiated by the replay official on a mugging of Beckham. Sure, it was a penalty, but we’ve seen worse that were not reversed on coaches challenge during the season.

6. More to come: You could tell the Browns worked on expanding the Chubb-Kareem Hunt package with the benefit of a normal work week (unlike prior to the Pittsburgh game). They were are on the field together a lot and Hunt achieved a personal-high with the Browns of five rush attempts in the first half alone. That last one resulted in his first touchdown with the Browns on a six-yard run. Hunt cherished the football in his locker after the game.

7. No FitzMagic: Ryan Fitzpatrick entered the game with a 5-1 record against the Browns, winning games with three different teams (Bengals, Bills, Jets). But he’d have to be Houdini to produce a win here with his supporting cast. He was intercepted in the second quarter when his perfect spiral zipped through the hands of Albert Wilson, off the jersey number on his chest and into the hands of Schobert. Schobert's second interception came in the fourth quarter when Fitzpatrick tried to bloop it over him while running from trouble.

8. Nothing special: The Browns were on high alert for Miami trick plays on punts and kicks. It paid off. At the end of their third possession, the Dolphins lined up in punt formation from their 42. Needing seven for a first down, they direct snapped to upback Patrick Laird. He was pummeled for two yards running up the middle. It didn’t help Miami’s cause losing kick returner Jakeem Grant to an ankle injury in the second quarter.

9. Friendly winds: Although the American flag blew briskly during the game, the tassels above the goalposts were relatively calm throughout. That made it easier to kick toward the treacherous Dawg Pound end zone. In the first half, Austin Seibert made two PATs and Miami’s Jason Sanders made a field goal from 36 yards into what has become known as the Bermuda Triangle. Seibert missed from 46 yards in the third quarter. Those kicks did improve the numbers of all kickers attempting kicks toward the Dawg Pound: 3 of 9 on field goals and 12 of 16 on PATS.

10. Friends in high places: The Browns’ support for Myles Garrett was voiced all week by coaches and players and in official statements. But not much has come from their highest office until now. During pre-game activities, owner Dee Haslam appeared on the field wearing a Browns ski cap bearing Garrett’s No. 95.