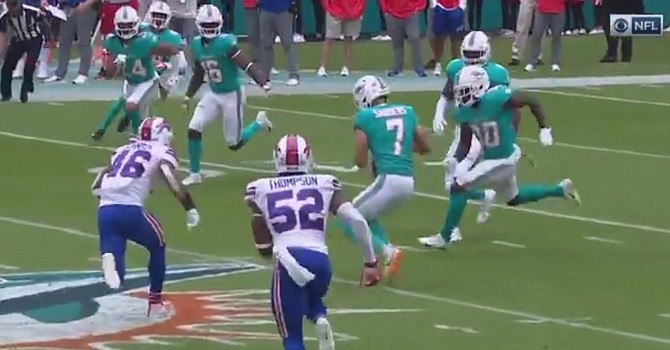 The nothing-to-lose Dolphins have brought back the onside kick. (Sportsgossip.com)

First down: Distractions and traps.

Because of the way it ended, the Browns never really got to enjoy their 21-7 victory over the Pittsburgh Steelers – the biggest win of the season (yet). Myles Garrett’s helmet whack on Mason Rudolph’s head was followed by statements, suspensions, video analyses, hearings, accusations, fines, and more bloviating than in a presidential debate. When it came to football talk, there was more discussion about the rematch in Pittsburgh than the game Sunday against the Miami Dolphins. Which makes this contest a coaching nuisance. Avoiding the trap of looking ahead to the Steelers may be a greater challenge to Freddie Kitchens and his staff than actually playing the Dolphins, who have been left as a roster of misfits due to franchise excavation, a.k.a. tanking.

Second down: Next men up.

The position hit hardest as a result of the Thursday Night Brawl with the Steelers was defensive line. Garrett was suspended for the season and tackle Larry Ogunjobi for one game. Add end Olivier Vernon to those losses. He will miss his third game in a row with a knee injury. That leaves one starter – tackle Sheldon Richardson – surrounded by backups Devaroe Lawrence at one tackle spot, and Chad Thomas and Chris Smith at the ends. The only regular reserves available are end Bryan Cox, who has not been active since being added two weeks ago, and tackle Eli Ankou, who has played sparingly in three games active. Two potential reinforcements were promoted from the practice squad this week, tackle Brandin Bryant and end Porter Gustin. What it means is that Richardson, who has been outspoken in his support of Garrett all week, has to step up and be a real leader on Sunday.

The evolution of the Nick Chubb-Kareem Hunt “pony package” continues to be a work in progress. Although the two backs were effective again in their second game together against Pittsburgh, the short work week prior to that Thursday night game pretty much eliminated taking the package to a second level. “Some of that is true,” conceded O-coordinator Todd Monken. “You really only have so much you can do in a short week. You try as best as you can – to kind of coin a phrase – with your plays to have the songs you know the words to, and that it is easy for your guys to recall for that week. It is hard to come up with too many things when you are trying to assess timing with your receivers in terms of different blocking schemes and you try to revert back to what you do well.” Given another full week to expand the use of Chubb and Hunt, we might expect to see new options utilized on Sunday. All of which has kept Dolphins coach Brian Flores up at night. “It’s very challenging to say the least,” he said of game-planning for Chubb-Hunt. “Two very, very good backs. Both explosive. Both tough physical runners. Good, very good vision. Both can actually – [they are] good receivers out of the backfield, so they pose a lot of issues and the two of them in the game together keep people up at night, I’m sure. They’ve kept me up.”

Fourth down: All hands on deck.

Through 10 games in this NFL season, there have been only five kickoffs returned for touchdowns and only two onside kicks recovered by the kicking team. The Dolphins had one of each in their 37-20 loss to the Buffalo Bills last week. With nothing to lose, and with offensive and defensive units hurting from roster excavation, special teams coordinator Danny Crossman is unafraid to try anything to help the cause. Browns special teams coordinator Mike Priefer has had his units on high alert all week. “Obviously, this week there is more of an emphasis because they have tried three [onside kicks] and they have gotten all three – two of them when they were offside. They have faked a punt successfully, they have faked a field goal successfully and they had a kickoff returned for a touchdown. Specialists-wise and what [they] have bringing to the game on Sunday, they are pretty dangerous. As normal, we have our work cut out for us.”