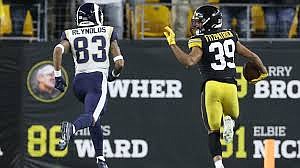 Minka Fitzpatrick has waved bye-bye to a lot of quarterbacks this year. (USAToday.com)

1.Free safety Minkah Fitzpatrick might be the “acquisition of the year” in the NFL. When the Steelers traded their No. 1 pick in 2020 to Miami on Sept. 17, the deal was mostly panned. Pittsburgh never trades away its first-round pick. But Fitzpatrick has almost single-handedly turned around the team’s fortunes. He arrived with the team at 0-2 and franchise QB Ben Roethlisberger headed to IR with an arm injury. In Fitzpatrick’s seven games, the Steelers are 5-2 and he has been instrumental in just about every win. He has five interceptions, two forced fumbles and one fumble recovery and had a hand in two other defensive turnovers – making him responsible for 10 of the team’s 26 turnovers. He has scored touchdowns in successive games – one of four NFL defensive players with two TD this season. Fitzpatrick was the 11th overall pick of the Dolphins in 2018, the year the Browns chose Baker Mayfield first and Denzel Ward fourth.

2.The Steelers have lived off their famous Steel Curtain reputation for years with an inferior defense. Now it’s formidable again. Besides Fitzpatrick, the new player of impact has been rookie linebacker Devin Bush, who finally filled the void created by the spinal cord injury of Ryan Shazier. In all, there are eight former first-round picks on the starting defense, and two in reserve. The unit is creating wide differentials in sacks (33 for v. 11 given up) and turnovers (26 takeaways v. 13 giveaways). Their 26 takeaways are second in the NFL to New England’s 27.

3.That’s how the Steelers have been winning. It hasn’t been on offense, though it has capitalized on eight of the last 13 takeaways with touchdowns. Without Roethlisberger, the Steelers try to minimize fill-in quarterback Mason Rudolph’s mistakes. He has a 94.7 passer rating (10 TDs v. four interceptions), but mostly dumps his passes underneath. The Steelers don’t even consider Rudolph the heir to Roethlisberger, who has a couple years left. The passing game is averaging 10 yards per completion – the franchise’s lowest since 1970. The running game has been historically bad. Even with starter James Conner, who will be back after a two-game absence, they average only 3.5 yards per rush and have just two games over 100 yards rushing as a team. Conner had four 100-yard games alone last year.

3.When kicker Chris Boswell missed a game-winning field goal from 42 yards in overtime in the 2018 season opener in Cleveland, it launched him on the worst season of his NFL career. Boswell led the NFL last year with 12 missed kicks (seven field goals, five PATs). But he has bounced back and is 37 of 38 this year.

4.Long-time Pittsburgh GM Kevin Colbert should be a candidate for executive of the year honors this year, just for his trade for Fitzpatrick and drafting (after a trade-up) of Bush. Interestingly, Colbert quietly turned down a contract extension this year and could be a “free agent” when his contract expires after the 2020 draft.

Small world: Cornerback Joe Haden was a Browns’ first-round draft pick in 2010 and played for them through 2016 … Offensive tackle Zach Banner played for the Browns in 2017 … Defensive coordinator Keith Butler was Browns linebackers coach 1999-02 … Assistant head coach John Mitchell was Browns defensive line coach 1991-91 … Offensive coordinator Randy Fichtner was born in Cleveland and is the son of former Browns defensive back Ross Fichtner … .Cornerback Justin Layne is a native of Cleveland and attended Benedictine High School ... Quarterback Mason Rudolph was born in Chagrin Falls, OH, and moved to South Carolina in middle school.