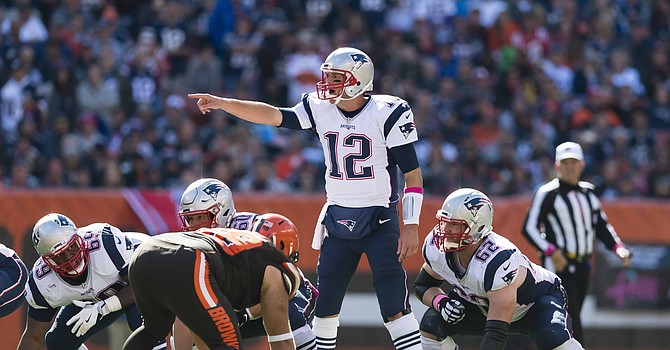 Tom Brady and the undefeated Patriots look to continue their dominance vs Cleveland on Sunday.

1.The Patriots lead the NFL in scoring yet they: a. have used mostly deep roster receivers because of injuries to No. 1 pick N’Keal Harry and Josh Gordon and the infamous flame-out of Antonio Brown; b. have the worst tight end production in the NFL; c. average 3.3 yards per rush attempt; d. are starting pedestrian backups at left tackle and center. So how do they average 31.9 points per game? Tom Brady, a weak schedule, and five touchdowns on defense and special teams.

2.Bill Belichick has no defensive coordinator (his last two defected for head coach jobs with the Lions and Dolphins, and their replacement resigned for personal reasons) and no stud pass rusher. Yet this might be Belichick’s best defensive team in his 20-year reign. Like many things in a Belichick team, it goes against convention and is built from the back to the front. The secondary runs seven-deep with four excellent cornerbacks and three outstanding safeties. The linebackers have been tremendous and their versatility helps Belichick “scheme” a pass rush with disguises and plenty of cover zero blitzing. Two off-the-chart numbers underscore the production of the defense: Spearheaded by a league-leading 18 interceptions, the Patriots are at plus-14 in turnover differential – twice as good as next-best Pittsburgh – and have a plus-15 differential in sacks.

4.On top of everything else, Belichick is without his dependable kicking combination of kicker Stephen Gostkowski (14 years) and punter Byron Allen (six years). He is making do with journeyman kicker Mike Nugent and rookie punter Jake Bailey.

2.With his next coaching win, Belichick will join Don Shula and George Halas as the only head coaches in NFL history with 300 or more wins, counting post-season. Shula has 347 and Halas has 324.

3.Belichick is the only active head coach or team executive appointed to the Blue Ribbon committee to help select the Pro Football Hall of Fame’s special Centennial Class of 10 players, three contributors and two head coaches to commemorate the 100th NFL season in 2020. “I have been around for not quite half of it but close. I have been fortunate to be around, compete against, be on the same team as, and observe many of the great people in this game so I was honored to be asked to do that. I will give my best and honest input when I am asked to do it,” Belichick said.

4.Despite giving up a second-round pick to Atlanta for receiver Mohamed Sanu, the Patriots expect to own 12 picks in the 2020 draft. That includes four projected compensatory picks for losses in the 2019 free agent season. Two of those are expected to be at the end of the third round.