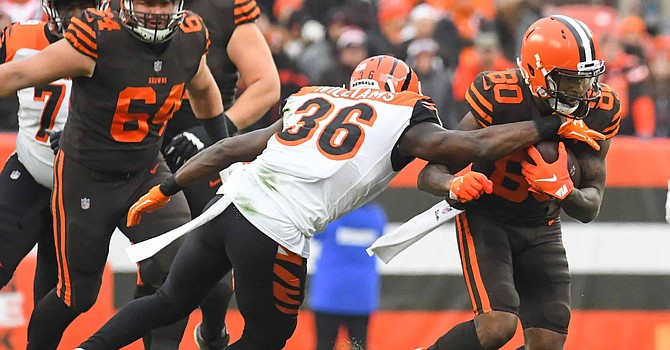 Instant takeaways from the Browns’ 27-19 over the Cincinnati Bengals …

1. Style points not necessary: In the history of the Battle of Ohio, there have been many forgettable ones like the one that unfolded in FirstEnergy Stadium. At this point of their Season of Great Unmet Expectations, the Browns will take any victory without the style points. Thus, no griping about a 27-19 triumph over the 1-12 Bengals. In fact, they caught a huge break when Baker Mayfield’s apparent third interception at the Browns’ 23 with 4:58 to go was overturned on replay and ruled pass interference on Bengals cornerback William Jackson. Mayfield then advanced the ball, 85 yards overall on 14 plays, for a chip-shot field goal to preserve the win. It was their fourth in a row at home and upped their record to 6-7 overall and 3-1 in AFC North games. A big play in the game was Austin Seibert’s 53-yard field goal at the end of the third quarter to up the lead to eight points. The teams exchanged field goals in the last 1:06 to keep it an eight-point game.

2. Thanks, Zac: Bengals rookie head coach Zac Taylor is one of those offensive geniuses who believe in pass-first – no matter where. The Bengals moved from their 14 to the Browns’ 2 in the third quarter, partly due to the hard running of Joe Mixon. Then from the 2, the Bengals were sacked on first down and failed on two frantic Andy Dalton incompletions in the end zone. The resultant field goal cut the Browns’ lead to 21-16. It’s just amazing how these coaches eschew the run inside the 5 nowadays.

3. Haltime adjustment, duh: At halftime, Nick Chubb had three rush attempts for seven yards and Kareem Hunt three for 10 yards. Somebody in the Browns coaching room must have said, “Hey, did you guys know the Bengals are last in rush defense?” After the second half kickoff, the Browns handed off to their two backs four straight plays: Hunt for 6, Chubb for 3, Chubb for 7, Chubb for 57. After a failed fade pass from David Njoku from the 3, Hunt ran around left end for the touchdown. (It’s not that hard to figure out, right?) Chubb went over 100 yards in the fourth quarter

5. More like it: Mayfield had his best drive to re-take the lead, 14-13, before the half ended. He made three big-time throws – to Jarvis Landry for 20 yards on third-and-19 from the Browns’ 16, to Kareem Hunt for 29 yards, and to Odell Beckham Jr. for 21 on third-and-6. Then Mayfield saved the drive inside the red zone with a keeper run with a reach over the left pylon for a 7-yard touchdown.

6. More turnovers: Despite opposing the NFL’s 32nd ranked run defense, the Browns threw often, of course. It resulted in two Mayfield interceptions. The first was changed to an interception after originally ruled a fumble by newly activated tight end David Njoku, on his first target since Game 2. Njoku had the ball taken away by linebacker Nick Vigil when Njoku hit his back to the ground. The call was upheld by replay. The second interception came when Mayfield fired high and hard for KhaDarel Hodge on third-and-10 from the Browns’ 19. The ball glanced off Hodge’s hands, then off the hands of cornerback B.W. Webb and into the hands of safety Jessie Bates. That takeaway was turned into the Bengals’ only touchdown of the half, a 1-yard run by Joe Mixon.

7. Solving it: Somebody forgot to tell Bengals kicker Randy Bullock about the Bermuda Triangle. In the first quarter he made field goals from 34 and 44 yards into the Dawg Pound end zone, and then added one from 28 yards in the third quarter. Austin Seibert had a 31-yard field goal at the end in the fourth quarter. Those improved the season record of all kickers to 7 of 13 toward that capricious end zone. Seibert also made a PAT to that end, improving total PATs to 13 of 17 that way.

8. Shanks for asking: While the kickers were flawless, the punters suffered shanks. Neither punted until 4:58 left in the first half. Cincinnati’s Kevin Huber shanked one in the middle of the field for 36 yards, which went for a 26-yard net after Dontrell Hilliard’s 10-yard return. Four plays later, Jamie Gillan returned the favor with his worst kick of the year – a 29-yarder off the side of his foot and out of bounds.

9. OBJ all day: Beckham has not finished a season healthy since 2016, and the chance of a third in a row improved when it was disclosed Sunday morning, via Ian Rapoport of NFL.com, that Beckham has been playing with a sports hernia injury that will necessitate surgery. Before the game, ESPN’s Josina Anderson reported that Beckham responded to her text that “there is no decision on surgery yet." Anderson also reported it was her understanding that the injury is in the area where “the rectus abdominis meets the adductor/groin.” Beckham has not missed a game but has been on the team’s injury report every week with hip and/or groin injuries. He skipped all of OTAs to get himself in the best possible physical and mental shape, he has said, and then practiced sparingly in training camp and did not play in the preseason. The story took one more twist when Jay Glazer of FOXSports reported that Beckham definitely wants out of Cleveland and has told opposing players and coaches – “before games, during games” -- “’Hey, come get me. Come get me out of here.’” Cleveland-area media were generally lambasted for raising the issue of Beckham’s future with the Browns on Thursday, but his purposely vague comments now can be seen as a tip-off to Glazer’s report. Beckham had two receptions on five targets for 39 yards.