Browns Fall Out Of First Place With Crushing, Mistake-Prone Loss To 49ers 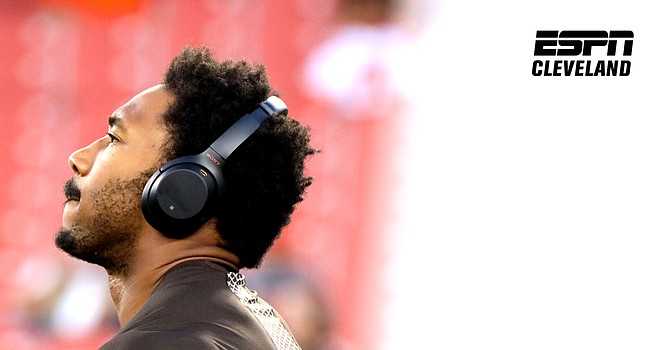 There were minimal bright spots in a MNF loss to the undefeated 49ers.

Instant takeaways on the Browns’ 31-3 loss to the San Francisco 49ers.

1. Prime-time fadeout: Steve Wilks’ defense picked a bad night to have a bad night – with everybody in the league watching Monday Night Football. It was consistently outfoxed by Kyle Shanahan’s offense, starting with an 83-yard touchdown run by Matt Breida on San Fancisco’s first offensive play. It couldn’t cover or tackle George Kittle. But Baker Mayfield was worse. The Browns quarterback suffered undoubtedly his worst game, committing three turnovers in the first half alone and never mounting a challenge after a 21-3 halftime deficit. He was pulled with 5:08 to go in the game. The Browns’ offensive line couldn’t block Nick Bosa even with tight end help and chipped in its usual assortment of pre-snap penalties. Odell Beckham Jr. added to the errors on the night by losing a punt in the fourth quarter carrying it one-handed while dodging a swarm of tacklers. It all added up to a crushing 31-3 defeat the 49ers, as Jimmy Garoppolo cruised to his 12th win in 14 career starts behind a team rushing night of nearly 300 yards.

2. No time: The Browns (2-3) dropped out of first place in the AFC North and have a short week to prepare for Russell Wilson’s first visit to FirstEnergy Stadium on Sunday with the Seattle Seahawks. The 49ers (4-0) joined the Patriots (5-0) as the league’s only undefeated teams.

3. Never forget: 49ers defensive end Nick Bosa was unblockable in the first half. He was credited with three tackles, one sack, four quarterback hits, one fumble recovery, induced one intentional grounding penalty, and also had one phantom planting of the flag. Yes, Bosa avenged Mayfield’s infamous planting of the Sooners flag in a 2017 Oklahoma win in Ohio Stadium by recreating his own. The former Buckeye did an elaborate phantom flag-waving and -planting after Mayfield threw the ball away short of the line of scrimmage while in Bosa’s grasp on the last play of the first half.

5. Take a seat: The Browns were driving in the second quarter with a chance to close the 49ers’ lead to 14-10. They had third-and-goal at the 49ers’ 8-yard line. They lined up with Mayfield in empty formation. He threw for Antonio Callaway at the goal line. He was open. The pass was a tad behind him. He missed it. Worse, the ball glanced off Callaway’s hand and into those of nickel back K’Waun Williams, the ex-Brown. Williams returned the interception 49 yards to mid-field. The 49ers moved 50 yards in six plays. Five of them were runs, including an 8-yard blast by Tevin Coleman on fourth-and-1 from the 27. Coleman scored the touchdown on a 19-yard run. So Callaway’s gaffe was essentially a 14-point swing, from 14-10 to 21-3. Callaway was summarily benched the second half in favor of Damion Ratley.

6. Wasted opportunities: Before he completed his first pass to Landry on the last play of the first quarter, Mayfield was 0-for-4 (two Beckham drops) with two turnovers – an interception and a fumble. But the 49ers blew both turnovers on the Browns’ side of the field, at the 41- and 29-yard lines. They punted after three play on the first one and missed a 47-yard field goal on the second. Mayfield finally got on the board with a 30-yard field goal, but it was a letdown after an Odell Beckham Jr. end-around run for 11 yards had given the Browns first-and-goal at the 7. Beckham finally made his first catch with 5:51 to play in the first half.

7. Uh, oh: The Browns opened up defensively in their 4-2-5 scheme despite the fact the 49ers always use two backs. And they were burned on the first play on a simple inside handoff to Matt Breida. The third-year back raced untouched for 83 yards and a touchdown. The Browns got a big defensive stop on their second series, also in the 4-2-5, and then added linebacker Adarius Taylor on their third for a few plays.

8. Instant trickeration: More evidence of Kitchens taking back his offense came on the very first play after Kitchens won the toss and took the ball. On first down, Beckham motioned right to left on a jet sweep, accepted then pivoted to the right and fired a 20-yard completion to Jarvis Landry. First time that’s happened, probably, since their LSU days. Beckham must have been excited. He dropped his first two targets after that. Before Beckham caught his first pass, he had a pass for 20 yards and two runs for 15 yards.

9. Hammer’s adventures: Punter Jamie Gillan had a punt originating from the Browns’ 6 take a super bounce and was downed at the 49ers 26 – a whopping 68-yard net. But on another big Gillan punt of 58 yards, 49ers returner Richie James had a 32-yard return. That surpassed the total yards allowed by the Browns on punt returns in the previous four games – by 13.