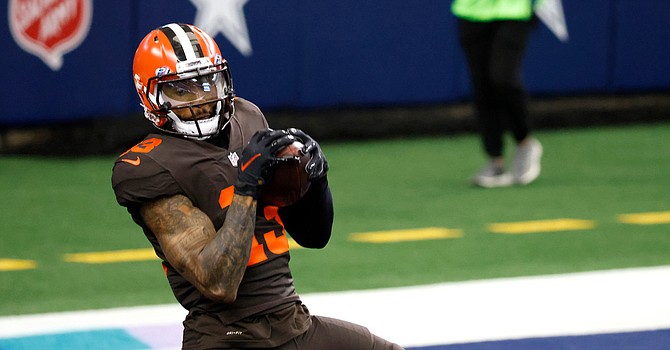 Instant takeaways from Browns’ 49-38 win over the Dallas Cowboys …

1. Statement delivered: In what was billed by themselves as a statement game, the Browns delivered an emphatic one. They dominated the Dallas Cowboys with an offensive display unseen in their franchise era. They spotted the Cowboys a 14-7 lead, lost Nick Chubb to a knee injury, rattled off 34 unanswered points, and then hung on. After the Cowboys scored 24 points in the fourth quarter to close a seemingly insurmountable lead to 41-38, Odell Beckham Jr. saved the day. After a squib kick gave the Browns at mid-field, Beckham ran for a 50-yard touchdown on an end-around on first down, capping a wild, 49-38 victory. Beckham was nearly tackled for a 12-yard loss by Aldon Smith, but he escaped Smith, turned it up the right sideline and took it to the house. It was Beckham’s third touchdown of the day. He opened the Browns scoring with a 37-yard catch from wide receiver and soul mate Jarvis Landry, caught one of 4 yards from Baker Mayfield and also had another run for 23 yards. Beckham accounted for 154 yards offense as the Browns called on all playmakers after Chubb was lost to a knee injury late in the first quarter. The Browns couldn’t breathe easy until Denzel Ward intercepted Dak Prescott at the Browns’ 3-yard line with 1:26 to go. It was the Browns’ third takeaway of the game.

2. Turnaround: It was quite a show, leaving players and spectators exhausted. It also left the Browns with a 3-1 record for the first time since the 2001 season. That was a turnaround season for the expansion franchise in the first year of Butch Davis as coach. Stefanski’s team looks much, much better.

3. Catch your breath: The Browns completed a 23-0 run with a Cody Parkey field goal to take a 31-14 lead at halftime. Stefanski’s deferral after winning the coin toss gave the Browns the ball to open the second half. It might have been the best-planned, best-executed half of football the Browns have played in 23 years. The Browns piled up 24 first downs and 333 yards in the first half, attempting 24 passes and 18 runs. Beckham had a run for 23 yards and Jarvis Landry had 37-yard TD pass to Beckham. Creativity and aggressiveness all over the place.

4. Formula test: The big lead at halftime prompted Stefanski to hammer his backs in the second half and limit Mayfield’s pass attempts. But the Cowboys quick-striked with three touchdowns and three 2-point conversions in less than 10 minutes in the fourth quarter to close the lead to 41-38 with 3:42 to go. Mayfield was 14 of 23 for 142 yards and two TDs in the first half; 5 of 7 for 23 yards in the second half. With Chubb out, the Browns spread the rushing load over to Kareem Hunt (71 yards, two TDs), D’Ernest Johnson (95 yards) and Dontrell Hilliard (19). Chubb had 43 yards on six attempts before leaving. Beckham had 73 yards and the TD on two surprise runs. In all, the offensive line and backs -- and Beckham -- punished Dallas’ defense for 307 yards on 40 attempts.

5. Oh, no: Chubb went down clutching his right leg with :59 to go in the first quarter and the Cowboys ahead, 14-7. Away from the ball, tackle Trysten Hill rolled over Chubb’s right leg while engaged with right guard Wyatt Teller. The injury was to Chubb’s knee and he was listed questionable by the Browns.

6. Running deep: Kareem Hunt and D’Ernest Johnson rose to the occasion. Hunt, who was questionable during the week with a groin injury, was instrumental on three straight Browns touchdown drives. Hunt’s running set up Mayfield TD passes to Beckham (4 yards) and Austin Hooper (1). Johnson got in the act on the third drive with a run of 28 yards and Hunt finished it up with a 2-yard, second-effort, plow-in.

7. Game-changer: With Chubb out, the defense stepped up. Myles Garrett had his third strip-sack in three games to set up Hooper’s go-ahead touchdown. Then, Ezekiel Elliott had the ball pried loose by Andrew Sendejo after a 24-yard run and Sione Takitaki recovered. That led to Hunt’s TD and a 28-14 Browns lead.

8. Tone setter: Stefanski established his aggressiveness on his first offensive series. After a Chubb run for 21 yards set up great field position, Stefanski pulled off a trick play – Jarvis Landry throwing to Odell Beckham for a 37-yard TD. Mayfield pitched to Chubb, Chubb pitched to Landry coming from the right side, and Landry heaved it left-handed to his buddy.

9. Pre-game notes: All six Browns players who were questionable on the injury report were made active for the game. The only healthy players made inactive were WR Rashard Higgins and OL Evan Brown. So it marked the first time that rookie WR Donovan Peoples-Jones was active. Also, Mack Wilson made his first start at weakside linebacker since his knee injury on Aug. 18.