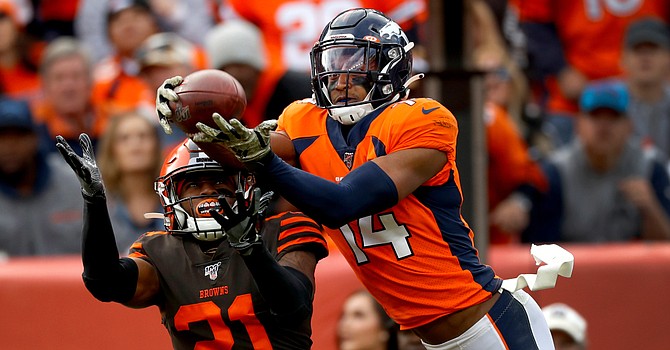 The Browns couldn't find any momentum in Mile High vs the Broncos.

1. How ‘bout a mock?: Now that was a quick season. It sure looks over for the Browns as they fell to 2-6 with their fourth straight defeat, 24-19, to the Denver Broncos. They made Denver quarterback Brandon Allen a winner in his first NFL appearance in his fourth season. The Browns settled for field goals in three trips inside the Denver 20 and turned it over on downs another time on a failed quarterback sneak. Their hopes of a win were dashed when Baker Mayfield’s fourth-down pass for Jarvis Landry was broken up by a pair of Broncos cornerbacks inside the Denver 20 with 3:19 to play. The loss dropped the Browns to 2-6 with home games on tap against Buffalo and Pittsburgh. The Broncos, 3-6, looked ripe for the taking, but the Browns couldn’t make the plays. They lost to an inferior team despite not turning the ball over, reducing their penalties and running almost 30 more offensive plays than the Broncos.

2. Finally: The Browns scored their first touchdown with 10:47 to go in the fourth quarter on a 7-yard Mayfield pass to Jarvis Landry. It was Landry’s first TD all season and closed the Denver lead to 24-19. Nick Chubb converted first downs on two occasions on the 76-yard drive with determined second effort. Odell Beckham Jr. contributed a 27-yard play on a catch off the shoulder of Chris Harris and a spin move to gain more yards upfield.

3. Never learns: Freddie Kitchens made some bad decisions on a possession deep in the Denver end in the third quarter. On third-and-3 from the 7, he took Chubb off the field and called a draw play to Dontrell Hilliard, who ran two yards to the 5. Electing not to kick a field goal to close the Denver lead to 17-15, Kitchens kept Chubb off the field and had Baker Mayfield try to sneak over right guard for the first down. It was close, but a bad spot left him inches short. After delaying as long as he could, Kitchens tossed the challenge flag. It was impossible under the sea of bodies to get a change in the spot and the challenge failed. Denver then went 95 yards in seven plays for a touchdown. Phillip Lindsay scored the TD on a 30-yard run on which no Browns defender laid a hand on him.

4. Sloppy tackling: Two big Denver offensive plays were the result of terribly bad tackling by the Browns. Tight end Noah Fant turned a 10-yard pass into a 75-yard catch-and-run when he flicked off feeble tackle attempts by Jermaine Whitehead, Greedy Williams and Adarius Taylor. Later in the second quarter, running back Phillip Lindsay broke into the Browns secondary with a handoff on first down and, again, Whitehead looked allergic to tackling. Lindsay was brought down at the Browns’ 28 after a 40yard run.

5. Red zone woes: The Browns entered the game ranked 22nd in red zone efficiency, scoring 11 touchdowns in 21 trips inside the 20. More failures contributed to their deficit in the first half. The first actually occurred at the Denver 21 (and won’t add to their bad percentage, of course). On third-and-3, the call went to Dontrell Hilliard on a handoff. No gain. Field goal. Next time, they got to the Broncos’ 12. Mayfield’s third-down pass for Antonio Callaway was broken up. Field goal. After a Joe Schobert-Denzel Ward fumble and recovery, they got a third opportunity. They had first-and-goal at the 4. First down, they tried a new jumbo formation with Justin McCray tackle-eligible on the left side with third-string tight end Stephen Carlson lined up as a fullback. Chubb ran right behind them and was felled for a 5-yard loss. On second down, Mayfield threw high (and late) for wide open Demetrius Harris, who caught the ball over the end line. On third down, Mayfield was incomplete for Landry, who lost his footing. Field goal. One more opportunity emerged in the final 2 minutes. They got to the Denver 19 and then went, incompletion for Rashard Higgins, throwaway, and short completion to Rickey Seals-Jones. Field goal. That’s four short field goals. Instead of 28 points, they netted 12 and trailed at halftime, 17-12.

6. Quick study: Denver quarterback Brandon Allen made his first NFL appearance in his fourth season. It took him all of seven passes to throw his first touchdown pass. Allen connected with Courtland Sutton from 21 yards when Sutton plucked the ball from going into the breadbasket of cornerback Denzel Ward. On the previous play, Sutton beat Ward on an inside move for a 19-yard play on a third-and-11 conversion. D-coordinator Steve Wilks left Ward singled on Sutton the whole first half (three catches for 42 yards).

7. No red carpet: Rashard Higgins entered the game on the second offensive play as a third receiver. But it was short-lived. Callaway replaced him in 31 sets (three receivers, one back) on the next three possessions. Mayfield’s pass for Callaway in the end zone was broken up by Harris in the second quarter. Meanwhile, Mayfield and Landry had trouble connecting. They were 2 for 7 in the first half, with two of Mayfield’s high-and-hard throws off Landry’s hands. Landry caught his first pass with 1:38 to play in the half.

8. Wardrobe change: The Browns were informed during the first half that Jarvis Landry and Odell Beckham Jr. were wearing shoes in violation of league uniform code. Landry wore gold shoes, Beckham white. Both changed at halftime.

9. More O-line changes: Greg Robinson returned to his starting left tackle spot and Wyatt Teller finally moved ahead of Eric Kush at right guard. This configuration figures to be the one the Browns have to live with now, barring injuries. There’s not much left to try. The Browns are hoping Robinson’s one-game time out will shock him into paying more attention to detail of assignments and technique. On raw talent, there’s no comparison between him and Justin McCray, who is a veteran backup guard. As for Teller, we will see now if the relatively high price paid by GM John Dorsey to the Bills – fifth- and sixth-round draft choices in 2020 – was worth it.