Eight Games In, Baker Mayfield And Odell Beckham Are Still Trying To Form A Bond On The Field. 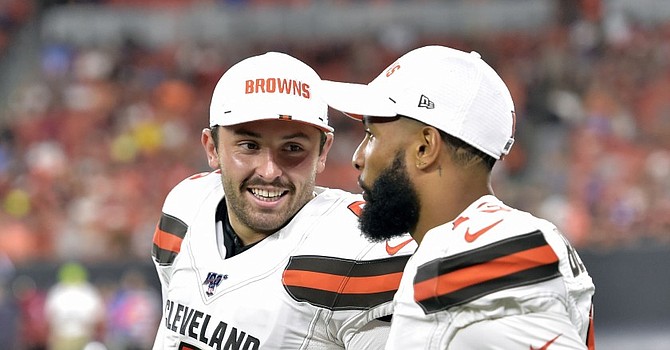 It's Week 10, OBJ has been a Brown since March. So what's going on?

1. No sunshine, no rainbows: One of the continuing sagas of this Browns season going down the tubes has been the seeming lack of chemistry between two of the offense’s supposed biggest stars – quarterback Baker Mayfield and receiver Odell Beckham Jr.

While Beckham leads the Browns in receptions (39) and yards (575), everyone expected more than one touchdown through eight games.

“We have to find ways to format things to get him the ball and force feed him early on to where he can make an impact before we can have the perfect look to give him a ‘shot’ play. I think that’s something we learned the hard way.

“As the weeks have gone on, we’re continuing to improve in how to get the ball to him.”

Whether you buy that or not – Beckham’s been saying he’s double-teamed all the time, so nobody really expected otherwise – Mayfield’s explanation does not address Beckham’s lack of targets in the red zone.

He has been targeted three or four times (depending on the Website used for this metric) and has exactly one catch. That was in the second quarter of the San Francisco game, a catch for seven yards down to the 49ers’ 7. Two plays later came the interception off Antonio Callaway’s hands at the goal line.

Now, Beckham clearly was not doubled on the fateful fourth-and-4 play that sealed the loss in Denver last week.

Beckham tried to get Mayfield’s attention just before the snap and then beat cornerback Chris Harris off the line of scrimmage. All Mayfield had to do was put the ball up and let Beckham go get it.

But Mayfield’s read took him to the middle of the field. His pass for Jarvis Landry was broken up with defenders on him, as tight end Demetrius Harris appeared to fail to “rub” a defender near Landry.

Mayfield said of the sequence: “It was fourth down. Obviously, you are not going down with the ball. Just situational awareness. Have to have the right routes. Have to have exactly what we need to do because it is critical in those situations that we have to be where we are supposed to be.”

Asked whether he saw Beckham’s signal, Mayfield said, “We talked about it, but I’m looking at other stuff at that point, so I didn’t see it.”

Coach Freddie Kitchens declined to elaborate on what went wrong on the play.

“I think [Mayfield] learned tremendously from that situation,” Kitchens said. “I think all of us did.”

2. Facial hair-gate explained: Because Mayfield’s facial hair look changed two times during Sunday’s game in Denver – full beard, to handlebar mustache to regular mustache – it made the rounds on social media and became a topic of discussion at his Wednesday locker room interview session.

So, why exactly did he shave twice during the course of the afternoon?

“The quarterbacks had a Movember,” Mayfield said. “The original thought, for me, was to do handlebars. I was undefeated before Sunday with the handlebar mustache. So I shaved it off [after the game] because I didn’t deserve it.”

3. Brownie bits: Is the tinkering done on the offensive line? Maybe, maybe not. Kitchens said, “Probably,” when asked if Wyatt Teller would remain at right guard. “I thought he was solid,” he said of Teller, who started and completed his first game in Denver. “There are definitely some things in the running game he could get better at. He would be the first to admit that, but that is his first significant action since he has been with us.” …

Free safety Damarious Randall returned to practice. Randall had been out three weeks with a hamstring injury suffered in the late stages of the Seattle game. His return would offset the release of safety Jermaine Whitehead …

But safety Eric Murray (knee) did not practice. It could mean added playing time for Justin Burris or rookie Sheldrick Redwine on Sunday.