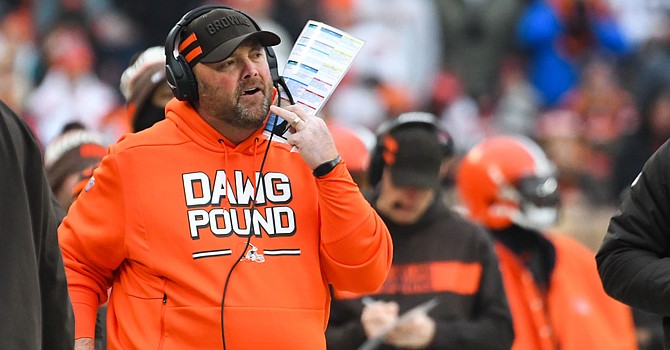 Prior to kickoff, Freddie Kitchens job was assumed safe without a catastrophic meltdown in the final weeks. (SI.com)

It all came to a head in the desert for the Browns.

They were gashed by rookie quarterback Kyler Murray, who was as elusive as a character in a video game, and outcoached by rookie coach Kliff Kingsbury, who called a brilliant game.

The Arizona Cardinals won, 38-24, in a microcosm of the entire Browns season.

Another loss to an inferior team, losers of six in a row coming in. Mind-boggling game management. Embarrassing defensive effort. And too much debate over which receiver deserves the ball more while the superstar running back had a 127-yard game yet seemed so underused.

Even in one of their most ignominious defeats, the Browns could not be put entirely out of their misery. Because Pittsburgh lost to Buffalo, the Browns (6-8) were not mathematically eliminated from the playoffs. But it would take Houdini and Dr. Phil to combine forces and inspire the Browns to beat 12-2 Baltimore Sunday in FirstEnergy Stadium.

Frustration ruled the day. In the fourth quarter, Jarvis Landry barked at Freddie Kitchens on the sideline for not getting the ball enough. Afterwards, Landry calmly explained he felt he wasn’t involved enough in a game rapidly slipping away.

“I just asked for the ball,” said Landry, who had a measly 23 yards with five receptions on eight targets. “I hadn’t touched the ball since the first quarter. And with 10 minutes in the fourth, still hadn’t touched it. I just thought at that junction of the game, I didn’t want the game to get too far out of hand.”

As usual, Odell Beckham Jr. was at Landry’s side in the deserted locker room to support him.

“When you have a guy like that who puts his all into his game, the endless hours of rehab … all the attention to detail in the film room, he wants to be great,” Beckham said. “We speak of [doing] legendary things and when you come out and don’t have the opportunity to do that, it’s tough. I understand him. There’s such a short window of opportunity.”

Conspicuously absent was any accountability of the quarterback, whose job is to distribute the ball. Mayfield (30 of 43 for 247 yards, two touchdowns, one interception, 90.0 rating) was thoroughly outplayed by Murray, his friend and successor at Oklahoma.

“We started slow,” Mayfield said. “After that, we were playing from behind the whole game. That’s pretty much the tale of the tape.”

Which brings up why on Earth Kitchens deferred and gave the ball to the Cardinals after winning the coin toss to start the game.

Why subject the woefully heavy-legged defense to set the tempo against the supremely quick and talented Murray?

Basically, the answer was because everybody else in the NFL defers.

“Just trying to get a double score at the end of the half … trying to score before the half and then get the ball to start the second half,” Kitchens said.

“Usually that’s what teams do in the NFL. You win the coin toss and defer. So that’s what we do,” Landry said.

“Like Jarvis said, that happens pretty much in the NFL,” agreed Beckham.

“I don’t really have an opinion on that,” said Mayfield.

Murray and Kingsbury gladly took the ball first and raced 90 yards in 10 plays in less than five minutes and took a 7-0 lead on the first of Kenyon Drake’s four rushing touchdowns.

The coin toss deferral was only Kitchens’ first questionable decision.

Mayfield’s interception on a high throw for Beckham in the end zone (on first down from the Cardinals' 20) cost the Browns an important counter score.

After Murray slapped another touchdown on the board in a six-play drive – jumpstarted by his 35-yard run on which four Browns defenders grasped at air – Kitchens had his only moment of sound thinking. He tried to settle down the offense by feeding the ball to Nick Chubb.

Of course, Chubb came through. On successive plays, he ran for 6, 17, 3 and then 33 yards for the touchdown. (Chubb finished the day with 1,408 rushing yards through 14 games. He touched the ball one time in the fourth quarter after the Browns fell behind 28-17).

But after a Mack Wilson interception gave the Browns back the ball at the Arizona 28, Kitchens brain-locked again on third-and-2 at the 20. He called that crazy shovel pass to Landry.

Landry was swarmed upon getting the ball and tried to make something happen with a throwback to Mayfield. He was buried for a 6-yard loss, and the Browns settled for a 44-yard field goal.

The Cardinals went ahead, 21-10, as Murray executed a terrific four-minute drive to bleed the clock before halftime. The Browns closed to 21-17 on a 2-yard pass to tight end Ricky Seals-Jones, which must have roiled Landry and Beckham.

And then, down, 28-17, to open the fourth quarter, a third-and-5 pass to Landry netted only three yards. With 12:05 to play, Kitchens called for Seibert to try a 45-yard field goal. He missed wide left – his only miss on the year other than towards the Dawg Pound end zone in Cleveland.

“I’d like to have [the call] back if we didn’t pick it up, yeah,” said Kitchens. “There were two third-down drives that I’ve got to do a better job of putting our guys in a better situation.”

So all of it fire-started the hot seat for Kitchens once again. This coming on the day NFL Network’s Ian Rapoport reported the Browns were inclined not to make a coaching change.

But at 6-8 with a game ahead against rampaging Baltimore, chances of improving over last season’s 7-8-1 record are remote. The playoffs would be out of the question if Pittsburgh defeated Buffalo.

“We have nothing but respect for Freddie,” he said. “I love him. It’s just been a tough season for all of us.”

Kitchens looked and sounded as if he’d been in a street fight after the game.

“I don’t care about my future as Browns coach,” he responded to the obvious question. “I’m going to show up Monday and I’m going to do the best job I can do Monday. That’s the only thing I can control.

“I’m pretty sure that ownership and John Dorsey would like for me to do my job and keep my head down and keep working. That’s what I’m going to do. I’m not worried about anything else other than that.”