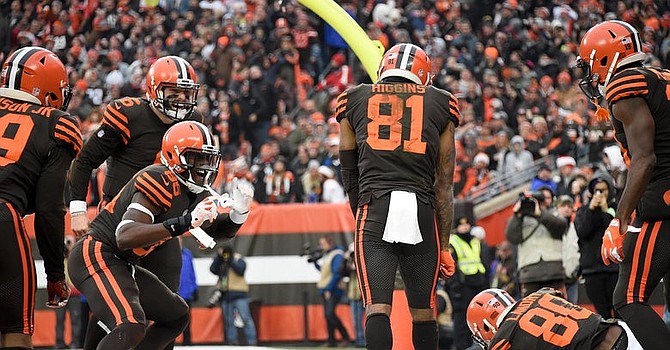 Hollywood Higgins hasn't seen the end zone yet this season, but hopes to soon (Heavy.com)

1. Steam the red carpet: Seemingly in a better mood than media have seen him in weeks, receiver Rashard Higgins promised, “The carpet is ready. It’s Stanley steamed.”

That’s as good a sign as any all season that Higgins believes he’ll receive some relevant playing time in Denver on Sunday. “The carpet” refers to the group celebration Higgins, aka Hollywood, receives after scoring a touchdown.

But the carpet hasn't been rolled out all year. Which would be fairly ridiculous until you realize Jarvis Landry also has no touchdowns and Odell Beckham Jr. has one.

Higgins’ 2019 season – his walk year with free agency on the horizon – has been a study in frustration. A sprained MCL in the season opener has limited him to three receptions for 48 yards in sporadic action in two games.

There has been talk of Higgins being locked in coach Freddie Kitchens’ doghouse. This week, Kitchens said Higgins hasn’t been healthy enough to become a relevant part of the game plan.

Higgins said he is 100 percent healthy now and he is anxious to trigger Baker Mayfield and the offense out of their collective slump.

It might only be coincidental that Mayfield has suffered in his sophomore year with Higgins being off the field so much. They were so good for each other last year. Higgins believes he can be a catalyst to a run to the playoffs.

The Return to Denver brings a smile to Higgins’ face. He set the Colorado State school record for all-time receptions just 65 miles north in Fort Collins, CO, and is expecting a rooting section on Sunday. Plus, the memories of the Browns’ 17-16 win in Denver last December are fresh in Higgins’ mind.

“Didja’ll remember when [former safety] Jabrill Peppers sacked [Case Keenum] at the end? That was fun, man,” Higgins said. “Just getting that feeling of winning. We need that feeling back around here. This is a big game for us.”

Higgins can be an unrestricted free agent after this season. The way the Browns are invested in Landry and Beckham, and committed to 2018 draft choice Antonio Callaway, it’s obvious they will let Higgins walk.

“As of right now I’m a Brown, so that’s all that matters, right now,” Higgins said.

2. Take a lap: In an effort to stamp out penalties, Kitchens has had players run to the end zone and back after committing pre-snap infractions in practice. It’s what he did in training camp, but for some reason it stopped when the real season began.

“We will see [if it works],” Kitchens said. “It is always about the result. We did that during training camp, and we will get back to it. It is all about concentration and focus. That is what it is.”

3. The 49ers effect: Brandon Allen, the emergency starting quarterback for Denver, will make his first NFL appearance on Sunday. The lack of relevant game tape to study poses a unique challenge for the Browns’ defense.

Defensive coordinator Steve Wilks said he coached against Allen in a 2017 preseason game between Carolina and Jacksonville. Wilks was with the Panthers and Allen played about one quarter with the Jaguars.

“I think he does some great things, Allen does,” Wilks said. “Very smart. You can tell he does a good job at protecting the ball. He does not hold onto the ball. Very athletic out in space. He can buy time with his feet and very accurate with the ball, as well.

“I still think their approach is going to be – because they have two dynamic running backs – they are going to try to run the football and create the play action off of it, which I think they do a great job of.”

The Broncos seek to emulate the 49ers’ immaculate play-action passing game off their zone-blocking running game. The 49ers’ 31-3 wipeout of the Browns on Oct. 3 is sure to be meticulously reviewed by the Broncos’ offensive staff.

“I know that is going to be a film that they are going to watch, and they have probably already had some conversations amongst one another,” Wilks said. “We definitely have to be prepared for some of the things that hurt us in that particular game.”

4. Brownie bits: I didn’t like offensive coordinator Todd Monken’s response to my question why the Browns came out throwing in Foxborough after four hours of pre-game rain: “Some of it plays into what you have in mind and some of it plays into if you are going to be in the RPO [run/pass option] world, sometimes that is where the ball goes. That is the short answer of it is you have run plays called up and the decisions you make to spin it on the perimeter. That is part of it.” Huh? …

Jamie Gillan’s drop-kick onside kick attempt in the New England game is just another skill the rookie punter brings to the table. “I think that kick can give you problems because of the different type of spin, the different looks that he can give you,” special teams coordinator Mike Priefer said. “He can give a high bounce, he can kick it low on the ground, he can bloop it over the top or he can kick it the other way. He is such a talented young athlete, and he is going to take his rugby background and apply it to football.”