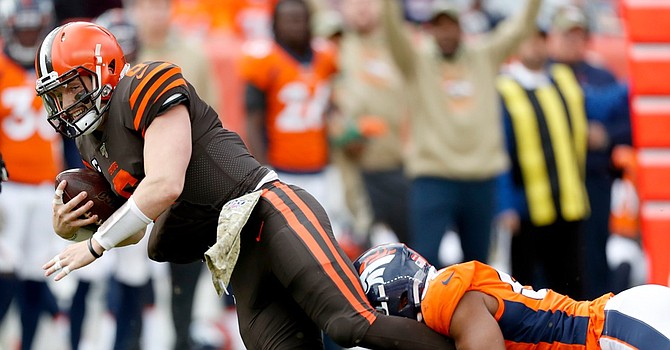 The good news was the Browns reduced their penalties and committed no turnovers. That was supposed to be the solution to all their problems.

The bad news is they still made questionable decisions, untimely mistakes, blown tackles and missed reads.

The worst news is they lost, 24-19, to a Denver Broncos team going nowhere behind a quarterback making his first NFL appearance in four seasons.

The Browns are 2-6 and for the first time coach Freddie Kitchens had to address a question about his job security.

Baker Mayfield said, “It’s a topic for you guys [in the media]. In our building, we know exactly what’s the problem. We had a good plan. We just haven’t executed.”

Kitchens will catch heat, no doubt, for eschewing a short field goal with the Browns behind, 17-12, and 5:16 left in the third quarter.

The previous play, the call went to Dontrell Hilliard with Nick Chubb on the sideline, and Hilliard’s 2-yard run set up fourth-and-1 from the Broncos’ five. Then Mayfield tried a sneak over right guard, and a poor spot left the Browns inches short.

After delaying as long as he could, Kitchens tossed the challenge flag for a better spot, which proved futile under the pile of bodies. Mayfield told Kitchens to challenge the spot.

“When I looked over the ball was crossed [past the first-down marker],” Mayfield said. “I’m sure the TV [replay] showed I turned my body a little bit. The ball was a little bit closer than the measurement portrayed.

“I told Freddie to challenge it. I was pretty sure I got it. He has full trust in me. I said I got it. They didn’t have enough evidence to overturn it.”

Denver quarterback Brandon Allen, in earning his first NFL win, then took the Broncos 95 yards in seven plays for the crushing touchdown that made it a two-score game. Running back Phillip Lindsay scored the touchdown on a 30-yard run on which no Browns defender laid a finger on him.

The Browns responded with a quick touchdown in 5 minutes, 16 seconds on a 9-yard catch by Jarvis Landry (six catches on 13 targets).

After the defense forced a punt – despite prolonging the drive on a Sheldon Richardson roughing call on Allen on a throwaway – Mayfield took over possession at the Browns’ 12-yard line with 7:21 to play.

Everything could be rectified by a winning drive.

All the missed tackles that caused two big plays by the Broncos’ offense, all the questionable time management issues on the Browns’ sideline, all the Mayfield high and hot misfires throughout the first 3 ½ quarters, all the failures in the red zone that amounted to three field goals and one turnover on downs … everything would be forgotten and forgiven with one winning drive.

Chubb earned one first down. Then Odell Beckham Jr. made a patented catch with hands pulling in the ball from the back point of the ball, then re-catching it off a bobble caused by cornerback Chris Harris’ hand, and then making not one but two spin moves for a 39-yard gain.

Another Chubb run of 9 yards took the ball to the Denver 25. Then on third-and-1, Chubb was buried for a 3-yard loss by blitzing safety Justin Simmons.

So it’s fourth-and-4 from the Denver 28 and the Browns playoff hopes are on the line. Kitchens used his last timeout with 3:23 to play. The Browns lined up three wide receivers with Hilliard in the backfield. To Mayfield’s left, Beckham tried to signal to Mayfield that he was singled up against Harris, Denver’s best cornerback.

But Mayfield couldn’t hear Beckham prior to the snap and didn’t look his way. Beckham easily beat Harris off the line of scrimmage. Mayfield forced a ball in the middle of the field for Landry, who was doubled by Davontae Harris and Kareem Jackson. It appeared that tight end Demetrius Harris missed picking a defender covering Landry. The pass was easily defended.

Beckham was understandably frustrated coming off the field, but declined to criticize Mayfield in the locker room after the game.

Beckham said, “We’re rushing to the line, the crowd’s loud. It was just one of those plays. He threw it to somebody sure-handed. It was a tough catch and they ended up breaking it up. It’s something I’m not mad at. I would throw to 80 on fourth down 10 times out of 10. It was tough. There were two guys there on him.”

On the play to Landry, Mayfield said, “Just trying to get an underneath route coming through. Expecting some sort of pressure … a blitz on a critical down. I think the details … it’s a rub route. Partially, that’s on me. We just have to do our job each play.

Beckham had five catches for 87 yards on six targets. According to James Palmer of NFL Network, Beckham said, “I can’t get the ball to save my life.” Palmer attributed the quote to CBS sideline reporter Jay Feeley.

“I think obviously we see what type of game-changing plays he can make. We have to continue to try to get him the ball. At the same time, if teams do want to take numbers, we have to play the numbers. He understands that. He’s frustrated because we’re losing. We all are. We understand. He always wants to be the answer, the solution to the problem. I wish I could be able to help him out more.”

So now the Browns have virtually removed all room for error in making the playoffs.

“I think we’ve got a bunch of guys that won’t let up,” Kitchens said. “They’ll come to work Wednesday and we’ll get better. They did better with pre-snap penalties and turnovers. It’s just sad we couldn’t make the play at the end of the game. We felt more confident in the huddle, confident the whole game until the end.”

“Stats like that are meant to be broken,” Mayfield said. “The guys in our building are going to be highly focused and highly detailed in doing their job. We don’t need to look up and have [any] regret about how we attacked and finish the season.”