Handshake-Gate Declared Over: Richard Sherman Pledges To Apologize To Baker Mayfield After Video Proves Him Wrong 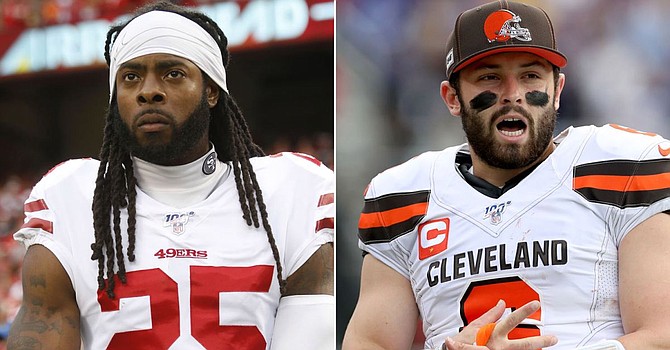 Handshake-gate over: There’s always something away from the field to ask about with these Browns.

Wednesday’s topic was Richard Sherman’s post-game rant against Baker Mayfield for not shaking his hand at the pre-game coin toss against the 49ers. After video surfaced showing Mayfield indeed shook Sherman’s hand, the 49ers’ cornerback did an about-face on Wednesday and said he would reach out and apologize to Mayfield.

Sherman used the imaginary handshake snub to rail to NFL.com’s Michael Silver that Mayfield hasn’t accomplished anything in the NFL and he should respect the game.

After further review, Sherman said on the Pat McAfee Show, “It's definitely my bad. I never want anybody to have to deal with some stuff that they didn't do. And so, you know, the questions that he's gonna get and the annoying, nonsense questions about some stuff that happened in a game that's already been done, you know, sure he'll get an apology for that. I'll probably reach out to him via text or social media to actually get a hold of him and talk to him ... on the phone.”

After practice on Wednesday, Mayfield said he had not yet checked his phone for a text apology from Sherman.

“I just heard that. That’s nice of him,” Mayfield said. “I know what I did. That is the one time a camera and something recording me has gone in my favor."

Mayfield said he was surprised at Sherman’s original comments and didn’t hold it against him even though Mayfield caught some grief on social media from people who agreed with Sherman.

“I’m not worried about it,” Mayfield said. “I know exactly what I did. People want to portray an image of me of who I am as a person.”

Just to be safe, maybe Mayfield should greet the Seahawks captains prior to Sunday’s game in FirstEnergy Stadium with candy and flowers.

More on Bosa: Mayfield didn’t have the same sense of sportsmanship for Nick Bosa, however.

The 49ers pass rusher made headlines and highlights by waving an imaginary flag and pretending to plant it into the turf, mocking what Mayfield literally did with an Oklahoma Sooner flag in a 2017 game in Ohio Stadium.

Bosa, too, said that he was motivated by Mayfield’s actions back then. The ex-Buckeye proceeded to dominate the game with five hits on Mayfield, including two sacks, forced a fumble, recovered one and pressured Mayfield into an interception.

Baker on Odell: In the last two games, Odell Beckham Jr. has four receptions in 13 targets, for 47 yards.

After the Browns beat the Ravens, 40-25, without Beckham making plays with the ball, conversation all week was about what a great team player he was for blocking downfield and hustling to help his teammates.

After the Browns got drilled by the 49ers, 31-3, conversation has changed.

“He’s frustrated when he’s not getting the ball and we’re losing,” Mayfield said. “I mean, why not be? Because he feels he can help us win.

Brownie bits: Cornerbacks Denzel Ward (hamstring) and Greedy Williams (hamstring) did limited work at practice for the first time in over two weeks. Coach Freddie Kitchens was still short of saying when they might be active again. “Those guys are still kind of day by day,” Kitchens said …

Receiver Rashard Higgins (knee) looked agile in position drills and appeared to be on track to make his first game appearance since injuring a knee on the first possession of the season opener. Higgins was a surprise scratch against the 49ers after he had been a “full” participant in the team’s last practice last week. “He just got a little sore in the latter part of the week. That was all,” Kitchens said.