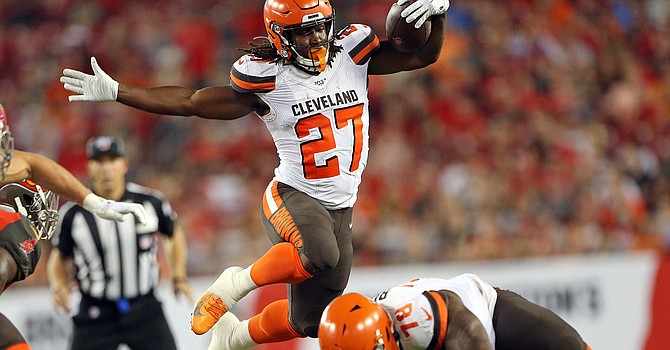 Kareem Hunt must manage his emotions in his return to NFL action.

1. Welcome, back: Kareem Hunt has been counting the days to his return to the field.

That’s the number of days since Hunt was released by the Kansas City Chiefs on Nov. 30, 2018. It’s been 353 days since his last game. That number will increase to 356 by Sunday, when Hunt makes his first appearance in a Browns uniform since the ordeal that resulted in his release, and an eight-game NFL suspension.

Thanks to GM John Dorsey, who signed Hunt on the rebound, the native of Willoughby, OH, makes his NFL return now with his hometown team in FirstEnergy Stadium Sunday against the Bills.

“I’m just excited. A lot of mixed emotions, high and low,” Hunt said. “It’s going to be a very fun, emotional game and I’m definitely going to be excited to get out there and do whatever I can and play a role to help this team win.”

Hunt said he’s a different person from the one who was suspended for violating the NFL's personal conduct policy in an incident outside his Cleveland apartment complex in February, 2018. A video released by TMZ months later showed Hunt hitting and kicking a female.

His reinstatement came after months of anger management and other behavior therapy counseling.

“Honestly, I had a lot of time to just sit and reflect and think and just look at the big picture,” he said. “I just look at everything from the outside in. I’ve been able to stay on top of things, like thinking before you act, and not reacting to little things, and just keeping your emotions to yourself. I feel my emotions were very high last year. Now I’ve kind of settled down.”

Now, Hunt has to somehow summon his competitive emotions to return to his job of playing football.

“Football is a game of emotion, so I’m just going to have to lock in and make sure I put those aside. There’s a job to be done, and that’s to win,” he said.

He said his time away made him appreciate the privilege of playing football again.

“I mean, honestly, it means so much to me,” Hunt said. “I just know that I really appreciate the fact I get to do this every day. It made me really appreciate waking up every morning and coming to work, even though there were days I didn’t like doing it. Now it’s a great feeling to be able to come here and train and put the grind in.”

2. No, thanks: As the complexities of game-day management continue to mount for first-year coach Freddie Kitchens, a storyline sure to gain in intensity is the prospect of handing over offensive play-calling duties to coordinator Todd Monken.

Kitchens has been adamant in saying it won’t happen. And Monken is certainly not going to politick for the job, even in the interest of helping Kitchens turn around the Browns’ season.

“I came in here knowing that I was not going to be calling the plays,” Monken said. “It is really a non-issue.

“The bottom line is I came knowing those parameters. In the end, like any assistant, you do exactly what the head coach asks you to do, and this is what he asked me to do on a daily, weekly basis. That is what I do. At this point, that has not even been discussed.”

3. One ball, a billion playmakers: Like everyone else, Monken expressed exasperation about losing four games in a row, the state of the offense, the red zone woes, and the general inability to maximize Odell Beckham Jr., Jarvis Landry, Nick Chubb – and here comes Kareem Hunt into the mix.

“When you have a great player like [Beckham], and we have a number of those guys skill-wise, we are always looking for ways to involve him in the office,” Monken said. “Sometimes it presents itself, and sometimes it does not.

“Obviously, we go through this every week – there is only one ball. That is the way it is. When you give it to Nick, it is not going to one of those guys, and Kareem adds to that. The bottom line is that frustration comes from losing and not scoring points in the red zone. I do not remember that early in the year. It will come the better we play.”

4. Tackling 101: D-coordinator Steve Wilks is just as disgusted with his unit’s missed tackles in the Denver game as anyone.

He will not blame it on league-wide restrictions that limit teams to 14 padded practices over the course of the 17-week regular season. Wilks said the Browns have practiced in pads every Wednesday so far.

“I still think there are ways around that … just [practicing] the details [of fundamentals],” Wilks said. “These guys at this level understand the physicality of the game so I do not really think it is that. I think it is more about leverage, angles and positioning yourself to finish, and that has been our point of emphasis and that is what we really need to get back to is the base fundamentals.”

5. Did you know: Dontrell Hilliard’s 29.2-yard average on kickoff returns ranks second in the NFL. So why did reserve defensive back and special teams core player Tavierre Thomas handle that chore in the Denver game?

“I think he is so fast and he is explosive,” said special teams coordinator Mike Priefer. “My biggest concern with Tavierre is obviously taking a hit. He had not taken a hit with the ball in hand in a long time, and he did a really nice job with that the other day.”

Tavierre had returns of 26 and 31 yards in the Denver game, but the 31-yarder started seven yards deep in the end zone.

“I think everybody in the room saw how explosive he was coming out of the end zone, even though one was seven yards deep. We have to kind of rein that in a little bit,” Priefer said. “He is aggressive. He is trying to make a play and I know Dontrell has had a good year.”