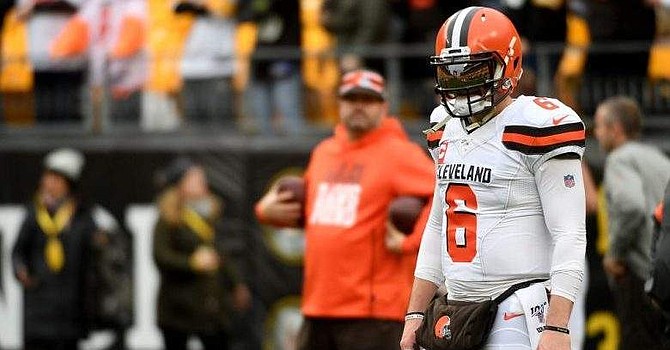 You can blame this Browns tortuous loss to an undermanned Pittsburgh Steelers team on a lot of things – the T-shirt Freddie Kitchens wore in jest on Friday stirring up the opponent, the Steelers’ deep playoff experience prevailing in a tight game, coaching adjustments, the Browns’ shortcomings at offensive line biting them again.

But in the end, the tragedy of the Browns’ 20-13 loss – their 16th straight in Heinz Field and first amid a playoff-like atmosphere – was that their No. 6 got outplayed by Pittsburgh’s No. 6.

The franchise quarterback and No. 1 overall draft pick got outplayed by an undrafted rookie nicknamed Duck making his first NFL start on his home field.

So the Browns are 5-7 with that high-profile roster and looking like it will be another year out of the playoffs, while the Steelers are 7-5, winning with their third-string quarterback and other backups.

At the end of the first half, Hodges heaved a touchdown from 30 yards to James Washington, who made a tremendous catch while cornerback T.J. Carrie was pulling him down in the end zone.

At the beginning of the second half, Hodges laid in a dime of 44 yards to Washington with Denzel Ward draped on him like a T-shirt. Hodges then set up the second touchdown on a fade in the end zone for Deon Cain that drew an interference by Ward.

“I think [Hodges] just settled down a little bit,” said Browns tackle Sheldon Richardson. “Brought the game into his own. He made some great throws, perfect placements for the guys to make plays. Kudos to them.

“No need to be surprised. He did [it]. When he made the first throw, I thought, ‘He can really throw the ball.’”

On the other hand, Mayfield’s throwing appeared impaired by a hit to his right hand by the facemask of Steelers linebacker Bud Dupree with 16 seconds left in the first half. Mayfield left the field, then trotted to the locker room for X-rays, which were negative.

Mayfield said the hand “got a little numb,” but he “took some medicine and went back out there.”

He re-entered the game for his first possession wearing a white glove to protect what Kitchens said was “a contusion.” Mayfield said he could not remember ever playing a game with a glove on his throwing hand.

He proceeded to go 8 of 15 for 98 yards with one interception and four sacks with the game, and playoff hopes, on the line.

Mayfield’s last surge to pull out this game came up short and resulted in a field goal after tight end Demetrius Harris reached high at the back of the end zone but had the ball – and his shoulder – pop out when he landed. The field goal closed the Pittsburgh lead to 20-13.

Mayfield had two more possessions in the fourth quarter to pull off a signature victory, one that would have sent the Steelers’ reeling with their first season sweep of losses to the Browns in 31 years.

A Terrance Mitchell interception of Hodges took the ball to the Steelers’ 30 with 7:18 to play. That golden opportunity died in an incompletion, a completion for no yards, and an 8-yard sack. The Browns retreated with a pooch punt to the Steelers’ 1.

After a Pittsburgh punt, Mayfield took over at the Browns’ 20 with 1:45 left.

There was an incompletion for Jarvis Landry broken up by safety Minkah Fitzgerald, an incompletion for Hunt saved by a roughing the passer penalty, a short pass for five yards to Hunt, and then a ball thrown high and wide for Landry that was intercepted by former Brown Joe Haden.

On the Browns’ sideline, Landry and quarterbacks coach Ryan Lindley appeared to have a disagreement after the play that sealed the loss.

“We’ve been able to make the plays we needed recently at home when it came to critical moments,” said Mayfield, whose right hand was compressed with ice and wrapped tight. “On the road, it’s in the even finer details. We learned that we didn’t make one more play than they did today, and it’s in all three phases of the ball. It’s not like it’s in one area we can blame. It’s everybody collectively as a unit.”

There was considerable talk in the Steelers’ locker room of Kitchens sporting the “Pittsburgh Started It” T-shirt in Cleveland on Friday night, which went viral when a fan was photographed with Kitchens and posted it on social media.

Kitchens argued that the Browns’ 10-0 lead through the first 1 ½ quarters proved that photo had nothing to do with the outcome.

“I wore a T-shirt,” Kitchens said. “I wore a jacket with it. My daughters wanted me to wear the shirt, and I’d wear it again. I put a jacket on. I covered it up. I took a picture with a fan. That was as simple as that. The T-shirt didn’t cause us to give up 40-yard passes. We were ready to play. That’s the only thing people need to be concerned about. We were ready to play.”

Richardson laughed off the T-shirt wars – Pittsburgh players sported their own messages dissing the Browns while entering the stadium – as “petty” stuff.

“We knew what type of game it was gonna be coming into it,” Richardson said. “I’m pretty sure [Kitchens] didn’t do anything to it. It was already hyped up to be this type of game.”

Did the events of the Nov. 14 Cleveland beatdown of the Steelers give them extra juice for the rematch?

“Extra juice?” Richardson said. “You can call it what you want. I call it better game planning. We did a little too much, as far as stunts and stuff [on the defensive line]. We set it up at the end. That’s why we made a little ground back up on that.”

A little ground against a Steelers offensive team decimated by injuries was not nearly enough.