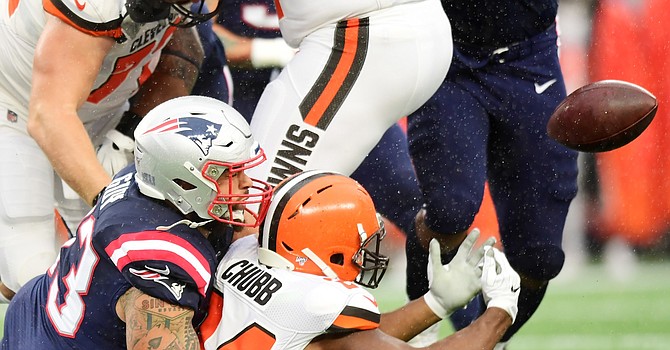 The script called for a near-perfect game for the Browns to beat the New England Patriots.

Instead, the same team that can’t shoot straight except when aimed at their own feet showed up once again.

The Browns committed turnovers on three successive offensive snaps in the first quarter and fell behind, 17-0. They wound up gifting Bill Belichick his 300th career coaching win, 27-13, with 13 penalties, a muffed punt and two failed coaching challenges thrown in.

This absolute mess of a Browns performance came after self-reflection during their bye week followed by a great week of practice, according to quarterback Baker Mayfield.

“We need to stop committing penalties. We need to focus and concentrate on staying onsides, so we don’t end up in first-and-20. And then take care of the football.”

The fact the coach can’t stop his team's mistakes makes it all the worse. It’s like an infection that no antibiotic can arrest.

And now Nick Chubb is infected.

The running back had an awesome day running the ball (131 yards on 20 carries), but fumbled on his first two touches.

The first one came after guard Joel Bitonio accidentally kicked Chubb in the shoulder as Bitonio was falling to the ground. The second one came when Chubb broke a long run of 44 yards and had an escort of three blockers between him and the goal line, but got chased down by cornerback Jonathan Jones, who chopped the ball out of his hands from behind.

Chubb also had a fumble in the Seattle game before the bye.

“It’s not me,” he said. “I’m just going through a spell right now. I just got to get back to what I do and that starts in practice. I got to make sure I’m over-emphasizing ball security and keeping it high and tight.”

The third turnover was on Mayfield. He shoveled a short underhanded pitch to Jarvis Landry right into the arms of pass rusher Lawrence Guy blasting through the Browns’ offensive line.

“Not expecting him to be there, obviously,” Mayfield said. “I’d like to say that I’d be able to hold onto it, but it’s a quick exchange that we practice.”

And when Denzel Ward blocked a 29-yard field goal try by Mike Nugent, the Browns had the ball with 2:19 to go in the first half, down by only 17-7, and knew they were getting the second-half kickoff.

So they had the double possession game working for them. But they couldn’t capitalize.

The Browns’ two-minute offense fizzled after two first downs. A sack of Mayfield was followed by a false start by Justin McCray, who got his first career start at left tackle.

So it was 17-7, Patriots, at halftime. And then on the Browns’ first possession, Chubb’s running took them inside the red zone, but another sack of Mayfield resulted in a field goal.

The defense, which had been working hard, except when trying to cover Julian Edelman (touchdown catches of 8 and 14 yards), then gave up it’s typical back-breaking play – turning a short screen pass to back James White into a 59-yard run.

Brady tacked on his second touchdown to Edelman to put it away and run the Patriots to 8-0.

To say Kitchens did not fare well in his first coaching matchup against Belichick is an understatement.

He said the game plan was to run the ball, yet he came out throwing on his first possession despite four hours of rain prior to the game. He kept his trust in Antonio Callaway (2 catches, 11 yards) despite more spotty play out of him and barely used Rashard Higgins.

He blew two timeouts with failed challenges on plays that replays clearly showed no chance of being overturned, including an interference call on a pick play by Callaway.

Kitchens also purposely called for a false start from his punt formation on fourth-and-11 with 6:07 to play, and then put his offense back on the field to try to convert fourth-and-16. Mayfield was pummeled for a sack there.

“We had half our guys running off, half running on and I wasn’t giving up right then by punting the ball to them,” Kitchens said. “The only chance we had was to convert for a first down, and then we didn’t.”

So at 2-5, the Browns have reduced their margin of error over their last nine games. They still have everything in front of them if they can remove the infection causing their mistakes.

Mayfield said, “I’d do everything I could to get it fixed. I just think everyone has to be singularly focused on doing your job, not worrying about what’s going on on the outside. We have to be willing to sacrifice the ultimate price to get our goals.

“We have to be able to sacrifice stuff each and every day – time, focus. It’s going to be a long stretch, but our guys are capable of doing that, and so it’s my job to make sure we do that each and every day.”