No Covid Bad News For The Browns On Wednesday, But No Green Light To Hold A Practice As Facility Remained Closed 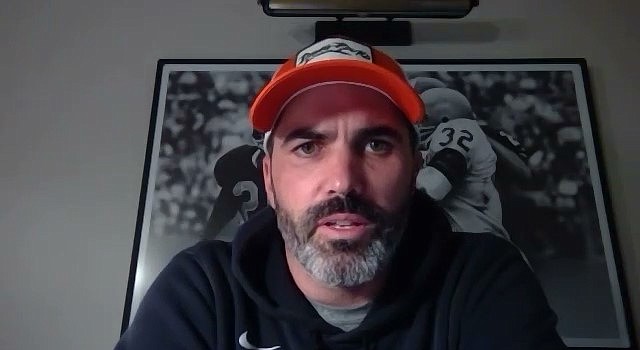 Kevin Stefanski won't be able to coach in Sunday's AFC wild-card game, but he was on the job Wednesday working virtually a day after testing positive for Covid-19. (Cleveland Browns)

These days over the last two weeks, no news is good news for the Browns.

Thus, it was considered a good day when they heard of no new positive tests for Covid-19 and no one flagged as a high-risk contact following Tuesday’s outbreak.

But the complex contact tracing process was not fully completed. As a result, the facility remained closed, and the team still was not wholly out of the woods of possible additional player and staff losses to infection or exposure to the virus.

At this stage in the week, any further high-risk contact automatically would miss Sunday’s AFC wild-card game in Pittsburgh because of the five-day minimum for quarantining.

Usually the busiest practice day of the work week, Wednesday came and went with the team relegated to Zoom conferences and a “virtual walk-through” in place of much-needed work on the field.

This is not the ideal way to practice for a playoff game against the Steelers.

Besides the typical field work needed to exercise the game plan, the coaches have to choose who will fill the shoes of Pro Bowl left guard Joel Bitonio (Covid), what cornerback combination will get the call in place of Denzel Ward (Covid) and Kevin Johnson (Covid) to cover Pittsburgh receivers Chase Claypool and Diontae Johnson, and who’s going to replace Olivier Vernon (Achilles) as a suitable complement to Myles Garrett.

Stefanski appeared fatigued, subdued and preoccupied – all of which were understandable -- on his first media Zoom call since testing positive.

“I do not know what the biggest challenge is,” he said of the unique work week. “I could just tell you that the team at every corner has taken on these challenges, whatever it has been. We have had weeks where we do not practice very much, and we have had weeks where we were without players or without a coach. That is just the nature of the beast this season. I think it speaks to the team’s resilience that they are going to get their job done no matter what.”

Later in the afternoon, the day got brighter when linebacker B.J. Goodson was activated from Covid reserve. The defense’s leading tackler and spiritual leader was stricken on Dec. 26 and missed Games 15 and 16.

Stefanski confirmed that special teams coordinator Mike Priefer would serve as acting head coach and offensive coordinator Alex Van Pelt would be the play-caller on Sunday in Stefanski’s absence.

Priefer filled a similar role for the Vikings in a game in 2016 when head coach Mike Zimmer had eye surgery. Stefanski was running backs coach on Zimmer’s staff at the time. Under Priefer, the Vikings played gamely in a 17-15 loss to a Dallas Cowboys team that finished with a 13-3 record.

“The special teams coordinator deals with everybody on the team and coaches every player,” Stefanski said. “I think it is a very natural place to go in an interim setting there where he can not miss a beat and then you let the offensive and defensive coaches focus on their side of the ball.

“A ton of confidence in Coach Priefer. He knows this team very, very well from a roster standpoint but also based on how we play.”

Van Pelt was going to audition for the full-time play-caller role in preseason games, but that was wiped out when exhibition games were cancelled. Because Stefanski is a true collaborator, Van Pelt has been heavily involved in every phase of the offense all season.

“AVP has been a huge part of our offense’s success,” Stefanski said. “He is a huge part of play calling. I may be the one sending it in there, but there is a ton of dialogue occurring between me, AVP and the rest of the offensive staff. He knows the things that we believe in. He knows how we play. He spends every waking moment with the quarterback, which is important when you are talking about trying to get him in a rhythm, comfort level and those type of things. I have a ton of confidence in AVP’s ability to get the job done.”

Besides Stefanski, the coaches that tested positive Tuesday and will be out are tight ends coach Drew Petzing and defensive backs coach Jeff Howard.

The situation at left guard comes down to giving Michael Dunn his first NFL start or giving veteran tackle Kendall Lamm his first start at guard. “We have some options there, but we are going to work through it. Obviously, I want to get on practice field first,” Stefanski said …

With Bitonio (Covid reserve), Chris Hubbard (injured reserve) and Nick Harris (injured reserve) unavailable, depth on the line is precarious. Whoever does not start at guard automatically becomes the backup tackle and guard. And with Javon Patterson on practice squad Covid reserve, the team had no backup center until it signed Anthony Fabiano. He’s on his third stint with the team and made one start at center for the Browns in the final game of the 2016 season against the Steelers …

Stefanski would not rule out receiver Donovan Peoples-Jones, who suffered a concussion in the last game. The coach said Peoples-Jones was “progressing” through protocols “so we will know more as the week goes on.”