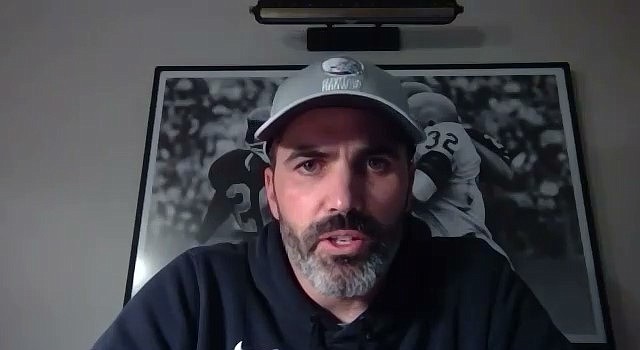 Kevin Stefanski had nervous energy and a helpless feeling watching his team on TV in quarantine and doesn't want to ever do it again. (cleveland Browns)

For followers of the Browns, watching their games this year has been excruciating and exhilarating. Just ask their coach.

“Those are two good words. I do not plan on doing that again,” said Kevin Stefanski.

Stefanski emerged from his man-cave, where he was isolated on Sunday night after testing positive for Covid-19 last Tuesday and forced to miss his team’s 48-37 victory over the arch-rival Pittsburgh Steelers in an AFC wild-card game. Stefanski watched the game on his 60 in. HDTV with the sound on and his cell phone off.

The Browns’ historic victory was emotionally-draining and stomach-turning. Stefanski said he did a lot of pacing.

“I have a newfound respect for all of our fans and how they watch those games. I like it better when I have some control,” he said.

Stefanski worked the days leading up to the game via Zoom. He conducted meetings with coaches to formulate the game plan, supervised virtual walk-throughs with players, remotely live-watched the one practice inside the team’s fieldhouse and collaborated corrections. After giving final instructions to his coordinators and acting head coach Mike Priefer, Stefanski delivered the traditional motivational speech via Zoom in the final team meeting to his staff and players Saturday night in the team hotel in downtown Pittsburgh.

And then he watched his team blind-side the Steelers with a 28-0 first quarter. Stefanski paced off nervous energy as Ben Roethlisberger brought his team to within 35-23, and then celebrated in solitude as the team closed the deal with its fifth takeaways and set up a division playoff date with the defending Super Bowl champion Kansas City Chiefs on Sunday.

“It is strange feeling,” Stefanski said. “It is something I hope not to ever do again. I tried to lock in and pay attention and try and kind of see where [play-caller Alex Van Pelt] was going and where [defensive coordinator] Joe [Woods] was going with some of the calls and then watching along with our guys.

“I just turned into a fan of the team just pulling for our guys like crazy. It is a very, very unique feeling not to be there with them. There was a ton of nervous energy that usually does not exist on the sideline for whatever reason, but it existed for me last night.”

Stefanski said the experience made him appreciate his job as head coach and leader of a team rapidly coming of age.

“It is not something I take for granted, I will tell you that,” Stefanski said. “I really enjoy working with the people I work with. I love coaching this team and these players. We have a bunch of fighters on this team. I am looking forward to getting back in the building with them.”

Stefanski said among the “very, very mild symptoms” of Covid-19 he experienced was a loss of taste. The first day he could return to the facility after the minimum 10-day quarantine after testing positive is Thursday.

“I should be returning,” he said.

Who will be back

Stefanski would not speculate on the possibility of return of four assistant coaches and four players who missed the Pittsburgh game because of Covid-19 protocols. The players are cornerback Denzel Ward, cornerback Kevin Johnson, left guard Joel Bitonio and receiver KhaDarel Hodge.

Mathematically, all would be eligible to return by Thursday.

In his first NFL start, Dunn played a key role subbing for Bitonio, who was named an All-Pro last week.

“Really proud of the guys who were in there who had not been in there before,” Stefanski said. “I will single out Michael Dunn. I thought he was outstanding last night. Really, really great in his technique, in his effort and in his assignment. He did a great job, among others.”

When Dunn had to leave in the fourth quarter with a calf injury, total unknown Blake Hance finished the last 14 offensive snaps flawlessly. After the game, quarterback Baker Mayfield joked that he literally introduced himself to Hance for the first time in the locker room before the game.

Stefanski has yet to meet Hance face-to-face.

“I am looking forward to it,” he said.

Necessity being the mother of invention

A week ago, center JC Tretter introduced a campaign as president of the NFL players union to abolish offseason minicamps and OTA practices. He cited league scoring records and reduced penalties as evidence teams are better off reducing wear on players and saving them for regular season games.

Considering the Browns played their cleanest game of the season in Pittsburgh – only three penalties and no offensive turnovers – after hardly practicing the past two weeks because of Covid protocols, I asked Tretter if he would now call for reduction of practice time in-season.

“No,” Tretter said. “My whole point is always to rely on the science and rely on what trainers, sport science and strength coaches have known for a long time. Practice is very important both for acclimation and making sure we keep our dosage of high-speed yardage and all of that up for guys to avoid soft tissue injuries. No, that will not be the next thing on my checklist.”

So how does he account for the Browns’ error-free performance after so little physical practice time?

“There are a lot of different ways to prepare,” Tretter said. “One of the most important things, especially this time of year, is having players who are healthy and feeling close to 100 percent. You look at things glass half full. Last week almost gave us a mini-bye, an unscheduled mini-bye where guys were able to get their body back after a long season.

“I know I felt coming back on Friday for practice that was probably the best I have felt in a long time this late in the season. You feel fresh, you feel revitalized and you go out there and play fast. We took our meetings seriously. We did our virtual walkthroughs. We did our virtual meetings. Everybody studied and prepared hard, and you can see that there are a lot of ways to prepare to play a football game.”

Unlikely hero Hance, an undrafted signee from Northwestern of the Buffalo Bills in 2019 whom the Browns signed off the Jets practice squad on Jan. 2, had his 25th birthday on Monday …

Stefanski stressed defensive takeaways in his Saturday speech to the team. Baker Mayfield said the coach predicted a tipped pass and interception in his vision of the game. It happened in the second quarter when tackle Vincent Taylor tipped a Ben Roethlisberger pass at the line of scrimmage and end Porter Gustin jumped up and snagged the interception. Tackle Larry Ogunjobi said it was his favorite memory of the game because it paid off the hard work Taylor and Gustin have put in this season.