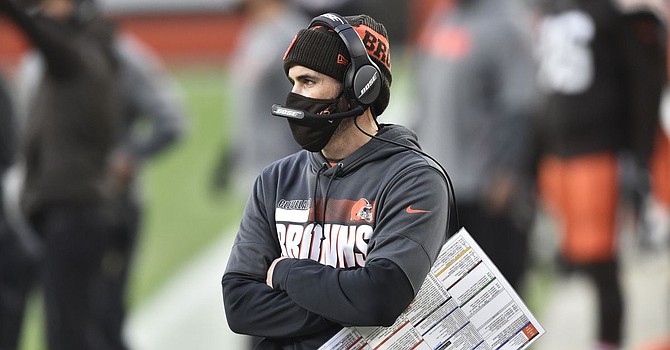 If the game is played in Pittsburgh on Sunday night, the Browns will be without head coach Kevin Stefanski, plus two more coaches and two more players after they tested positive for Covid-19 on Tuesday. (Chicago Sun-Tiimes)

Two days after qualifying for their first post-season appearance in 18 years, the Browns were hit with another Covid-19 outbreak that threatens their ability to compete in the AFC wild-card game scheduled for Sunday night in Pittsburgh.

The Browns announced before noon on Tuesday that head coach Kevin Stefanski had tested positive for Covid-19 along with two unidentified coaches and two players.

Within an hour, multiple reports said the coaches were Drew Petzing (tight ends) and Jeff Howard (defensive backs), and the players were guard Joel Bitonio and wide receiver KhaDarel Hodge.

Under league Covid protocols, all would miss the wild-card game against the Steelers and a minimum of 10 days from the date of diagnosis.

It is a particularly brutal blow to Bitonio, the longest-tenured Browns player whose first chance to play in a post-season game would have been Sunday in Pittsburgh.

Bitonio was awarded a game ball by Stefanski in the locker room following the playoff-qualifying win over the Steeelers on Sunday. In a scene captured on video and distributed on social media by the club’s in-house media department, Stefanski and Bitonio wore masks in the locker room – as did everyone else.

The Browns’ facility was closed and contact tracing was in effect to discern if any more coaches or players were exposed to those who tested positive.

Meanwhile, a league spokesman said in an email response, “There’s no change to the status of the game.”

That could change if it is determined the outbreak was inside the facility, and not just in the community.

In its announcement, the Browns’ statement said, “The team will continue to consult with the league and medical experts to determine the appropriate next steps as the health and safety of our players, coaches, staff and the entire community remains our highest priority. Our contingency planning calls for Special Teams Coordinator Mike Priefer to serve as the acting Head Coach.”

Tuesday is an off day for players, but a busy one for coaches. It’s the day they collaborate on the game plan.

Stefanski reportedly was working from home via Zoom conference with his staff. He would not be allowed to communicate with them on game day – if the game is played as scheduled.