And On The Fifth Day Of Their Playoff Work Week, The Browns Finally Practiced 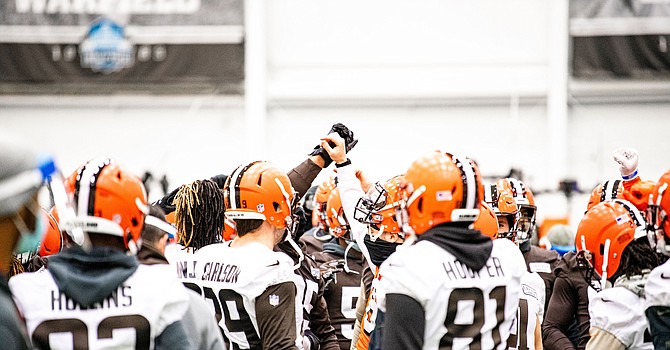 It was a happy occasion for the Browns to be reunited on the practice field for the first time since qualifying for the playoffs last Sunday. (Cleveland Browns)

Takeaways from Browns interviews and practice …

The Browns enjoyed their first practice of the work week after receiving the green light from the NFL Covid-19 team in the afternoon.

It effectively signaled an end to their Covid outbreak that currently leaves five coaches and eight players out.

Those numbers changed during the day when receivers coach Chad O’Shea and practice squad center Javon Patterson came off Covid-19 reserve, and safety Jovante Moffatt was added to the coronavirus list.

The status of linebacker Malcolm Smith, tight end Harrison Bryant and cornerback Denzel Ward are unknown. Stefanski, who appeared in a Zoom conference in late afternoon, would not speculate on their availability.

Nevertheless, it was a good news day just to get back on the practice field, albeit indoors.

Stefanski watched it live via Zoom from home and then he reviewed it afterwards via computer.

“Yeah, I think the players and the coaches always like to be out on the grass with the guys,” Stefanski said before the practice. “That is much better than being on these Zoom calls. I think they are excited to get out there.”

After the practice, Myles Garrett said, “It was good. We needed at least a day under our belts to get everything refined and make sure we look sharp.”

Baker Mayfield said Thursday not being able to practice would have “no impact” on the game Sunday. He was not believable.

“Essential to be out there every time,” Garrett said. “You have to be able to see how the looks are, how everything times up and see if it is as effective as you think it is on paper.”

As long as there are no surprise Covid test results, the team intends to have a walkthrough on Saturday and another Sunday morning in Pittsburgh.

Stefanski said he would address the team from home via Zoom on Saturday night, but will not have a last-minute pre-game speech Facetimed into the locker room on Sunday.

“Once it is game time and in that locker room, [acting] Coach [Mike] Priefer will be serving that role,” he said. “I have a ton of faith in him. The guys know the message. They do not need a Zoom call from me before the game to understand what they need to do.”

Stefanski intends to communicate with coaches during the day of the game and will watch the game from his basement. He can’t communicate from kickoff to the end of the game.

“Once you get to gameday, those are long days waiting for those [night] games to start,” he said. “I am sure there will be some phone calls here or there, but by and large, a lot of the work is done. We will have a walkthrough Sunday morning at some point with offense and defense for each one to go over some of the finer points. Again, I can’t stress enough how much I trust the coaches we have and the players to do their jobs. It is not going to be me inserting myself into the gameplan on Sunday.”

Right tackle Jack Conklin did not practice because of illness. Stefanski would not elaborate on his game status.

Conklin is one of seven players listed on the Browns injury report as questionable. Those include cornerback Terrance Mitchell (non injury-related), receiver Donovan Peoples-Jones, who came out of concussion protocol, Garrett (shoulder) and defensive tackle Sheldon Richardson (neck).

Stefanski said he was “confident” Garrett and Richardson would play Sunday, but he declined to characterize the chances of others.

Conklin would be a huge, unforeseen loss. If he couldn’t play, Kendall Lamm would play right tackle and Michael Dunn would replace Bitonio at left guard. If Conklin does play, Lamm is a candidate to make his first NFL start at guard.

Receiver Jarvis Landry on Thursday indicated the left guard would be Dunn, who never has played in an NFL game and last played in a live game in March in the XFL.

“We may be counting on him Sunday, so we trust in their preparation,” Stefanski said. “He is somebody who is always on point in what we are doing, gives a great look [on scout team], and can fill in at multiple spots on the offensive line so versatility is key in a season like this.”

Garrett and Conklin were named first team selections to the Associated Press All-Pro team. Bitonio and right guard Wyatt Teller were named to the second team. Two other Browns players received one vote among the 50-member AP media panel. They were center JC Tretter and long snapper Charley Hughlette …

Stefanski said the team’s Covid experts recommended the team make the 135-mile trip to Pittsburgh via airplane rather than bus caravan, so that’s what they will do …