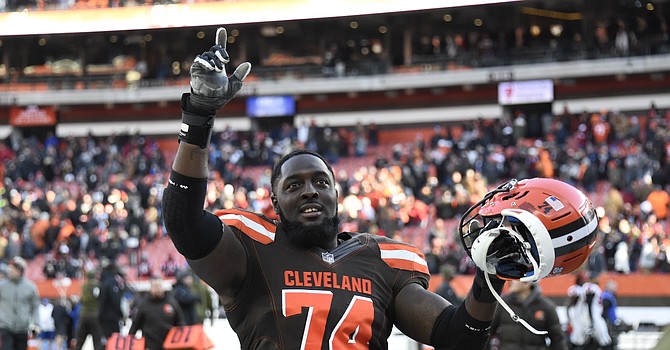 Offensive lineman Chris Hubbard was placed on Covid-19 reserve, but the Browns were able to avoid an outbreak. (Getty Images)

The Browns’ first positive Covid-19 test for a player in-season did not cause an outbreak on the team or result in postponement of Sunday’s game against the Houston Texans.

Because of the Browns’ continued diligence to intensive protocols in their facility, they avoided high-risk close contact to the infected player, offensive lineman Chris Hubbard, and were able to proceed with their Friday practice routine late in the day.

Hubbard, the offensive line’s sixth man, was placed on the Covid-19 reserve list and will not be active Sunday.

Cornerback Denzel Ward and linebacker Sione Takitaki were absent from practice because they did not clear protocols in time. But they are eligible to play on Sunday.

An outbreak was avoided because the Browns have been practicing intensive protocols – all team meetings done virtually, mandatory mask wearing inside the building and Oakley face masks on the practice field, safe social distancing – even before a staff member tested positive last Saturday.

Upon learning of the positive test, the facility was closed and the Browns conducted meetings virtually while contact tracing was done. When it was determined there were no high-risk contacts, the building was reopened and practice was hastily rescheduled later in the day.

“We just try to follow all the protocols to a T,” said coach Kevin Stefanski. “We met virtually this morning, which we were doing already. We just basically had to push back the day a little bit.

“Obviously, every single day, it is part of how we operate. I think also a big part of this is not having any high-risk close contact is really a main goal of ours today and moving forward every day. It is something we take very seriously.”

The Browns finished practice with dusk speeding down on them.

“This is 2020. Things are going [to] come your way, and you have to react,” Stefanski said. “I think our team is used to that. We got our work in and got all the reps we were supposed to get. It just was a little bit darker out there.”

It doesn’t hurt to have center JC Tretter on the premises. As president of the NFLPA, Tretter helped to write and negotiate the protocols in place.

“Yeah, I think JC is a big help for us when it comes to all of this, honestly – a lot of conversations over the months with JC and getting his insight into this because he has a unique perspective. Yeah, I lean on him a lot,” Stefanski said.

In his first week of practice after four weeks of rehabbing a sprained right MCL, running back Nick Chubb completed the week without incident. He practiced without a knee brace for the second day in a row.

Chubb’s status for the game will be determined after consultation with the medical staff, Stefanski said.

“We wanted to use each one of these days and see how he responded each day,” Stefanski said. “He hit all of the benchmarks. It is just a matter of making sure we are all on the same page and making sure that he is ready to go. If he is ready, he will be out there. If we feel like he is not ready this week, we will make that decision.”

The Browns would have to formally elevate Chubb to the active roster on Saturday.

Forecasts for Sunday morning are calling for an 80 percent chance of rain. Stefanski said a wet field would have no bearing on the team’s decision to play Chubb.

Right guard Wyatt Teller, who missed four weeks with a strained calf, was removed from the injury list, clearing the way for his return …

Linebacker Jacob Phillips (knee) was the only player listed as questionable. Which makes this first game after the bye the healthiest the Browns have been in weeks.