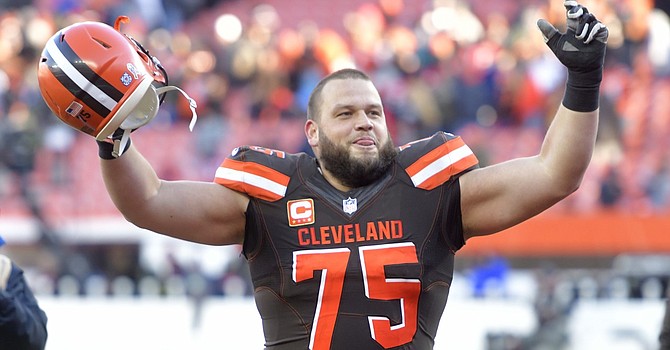 Guard Joel Bitonio, the longest-tenured Brown, has had his first career playoff appearance taken away by Covid-19. (News5Cleveland)

After clinching the team’s first playoff appearance in 18 years on Sunday, Baker Mayfield seemed to speak for the Browns and their fans when he said, “We are living a dream right now."

Forty-eight hours later, the dream was turning to a nightmare.

The merciless Covid outbreak that began the day before the Jets game has struck again.

On Tuesday, the Browns announced Kevin Stefanski tested positive for Covid-19 and will not be available for Sunday night’s wild-card game against the Pittsburgh Steelers.

Since Dec. 27, 17 Browns players have been placed on the Covid reserve list. Seven have since come back.

Yet the NFL insisted through Brian McCarthy, VP of communication, “There’s no change to the status of the game.”

NFL Players Association executives, including Browns center JC Tretter, the union president, steadfastly supported the protocols they helped to author to navigate the 2020 season during a pandemic.

They say there should be no bending of the rules for the post-season. Games will be rescheduled only if league officials believe there is a risk of spreading the virus and not for competitive reasons

Players or coaches identified as high-risk close contacts can return after five days of negative tests. Those who test positive must isolate a minimum of 10 days.

Theoretically, Stefanski, Bitonio and the others who tested positive on Tuesday can return for the Browns’ next playoff game – if they are able to beat the Steelers in Heinz Field, where they have lost 17 consecutive games.

Stefanski will continue preparing the team and consulting with his staff via Zoom conferences.

In his first year at the helm, Stefanski changed the losing culture of the franchise, steered his players through all the Covid disruptions and to an expansion era-best 11-5 record and first playoff appearance since 2002. You can argue that not only is Stefanski the NFL coach of the year, he is the team’s MVP.

On a Zoom call with DeMaurice Smith, executive director of the NFLPA, Tretter called the loss of Stefanski “huge.”

He said, “What it proves is even when doing all the right things, the virus is so contagious that doesn’t guarantee you full protection.”

“I feel for Coach Stefanski,” Tretter continued. “He has done an incredible job as a first-time, first-year head coach, stepping in and leading us to the playoffs. I feel for him as a leader and as a person. It’s very sad and really unfortunate.”

You can add the word “cruel” in the case of Bitonio.

The longest-tenured Browns player, Bitonio has endured more losses than anyone on the team. Qualifying for the playoffs for the first time was the highlight of a seven-year career that includes three Pro Bowl selections. Stefanski presented Bitonio a game ball after the 24-22 win against the Steelers and had him address the team.

“I talked to Joel quite a bit today,” Tretter said. “I feel for him, with what he’s endured over his career and finally finding that success for the first time, and then it being taken away at the last second, where he won’t be able to be out there on Sunday.

“It’s hard and I feel for him and all the guys that won’t be able to play the first playoff game. It’s extremely difficult, extremely tough. He loves playing football, loves the Cleveland Browns. This is just a terrible scenario for him and for everybody involved.

“We win this game and hopefully players and coaches can come back the next week,” Tretter said.

That prospect became a whole lot harder. With five days to go before Sunday’s game, the possibility of more losses to Covid exists.