Could Baker Mayfield Have Survived The Jets’ Dysfunction If The Browns Had Drafted Sam Darnold? 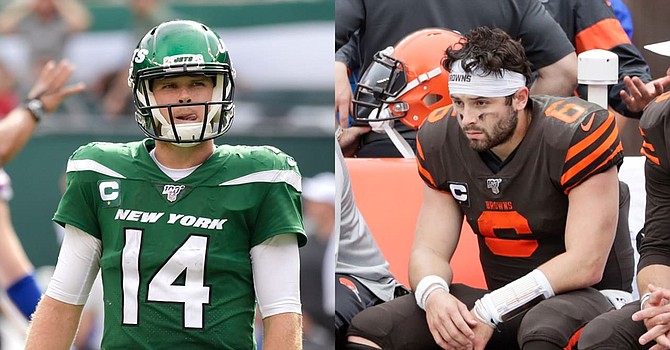 The once-promising AFC rivalry between Baker Mayfield and Sam Darnold ended when Darnold was traded by the Jets to Carolina. (NFL.com)

If Baker Mayfield is taking notes on his career, just in case he needs to pen an induction speech some day, he’d better save a few paragraphs for John Dorsey.

For if not for Dorsey, it might be Mayfield instead of Sam Darnold chewed up and spat out by serial organizational failure and shipped to Carolina by the New York Jets for draft pocket change.

Dorsey settled on Mayfield as the No. 1 quarterback of the 2018 draft before he even was named Browns general manager in December of 2017. In between jobs, he was scouting quarterbacks from his basement office in suburban Kansas City after the Chiefs surprisingly fired him in June of that year. He devoured college game tape and attended several of Mayfield’s games at Oklahoma and around the Big 12 Conference on the belief he’d get another gig in time for the next draft.

When Dorsey was hired by the Browns, he put Scot McGloughan, his former associate in Green Bay, on the payroll as a consultant. McGloughan independently had ranked Mayfield as his top QB of the draft, too. So when they teamed up in Cleveland, no other quarterback had a chance of unseating Mayfield as the Browns’ choice with the overall No. 1 pick in the draft.

Dorsey’s inner circle initially was divided. Alonza Highsmith favored Darnold. Eliot Wolf liked Mayfield. Andrew Berry was intrigued by Josh Rosen. Eventually, Dorsey got them all on board with Mayfield without revealing his choice.

Few in the league rated Mayfield No. 1 because of stature and maturity concerns. Which is why many in the media (hand raised) and, yes, even Mayfield speculated Darnold of USC was the odds-on favorite to be the Browns’ selection. Mayfield thought he was going to the Jets at No. 3.

The Giants were committed to running back Saquon Barkley with the No. 2 pick. The Jets favored Darnold first, but spent a lot of time with Mayfield as their Plan B. GM Mike Maccagnan, coach Todd Bowles and coordinator Jeremy Bates were prepared to take Mayfield over Josh Allen, Rosen and Lamar Jackson.

Twenty-four hours before the draft, Mayfield was being linked to the Browns for the first time. Many still didn’t believe it. The Jets were elated. They got their guy, Darnold.

Four years later, Darnold became the 26th quarterback drafted in the first round between 2009 and 2019 to be jettisoned by the team that drafted him.

Only seven have survived their original team, and one, Deshaun Watson (Texans), is hanging by a thread. The others assured of entering the 2021 season with their original teams are Patrick Mahomes (Chiefs), Mayfield (Browns), Allen (Bills), Jackson (Ravens), Kyler Murray (Cardinals) and Daniel Jones (Giants).

When it comes to NFL quarterbacks, timing and place are not everything, but they have as much to do with success as accuracy, arm talent, pocket presence and processing speed.

Allen was taken No. 7 in 2018 by a Buffalo organization on the rise. He has not suffered a change in coaches or offensive systems in his formative first three seasons. Jackson was taken No. 32 by a Baltimore organization renowned for stability and smartness; the Ravens haven’t changed in Jackson’s three years.

Rosen suffered a coaching change in Arizona after his first season, was abruptly traded to Miami in Year 2, and then careened across country from Tampa Bay to San Francisco as an emergency third-stringer.

Mayfield and Darnold have each suffered organizational dysfunction. But only Mayfield has endured. Why is that?

Darnold already was entrenched as the “franchise” starter when the Jets came to Cleveland for a Thursday night prime-time meeting in Game 3 of the 2018 season, while Mayfield was coach Hue Jackson’s backup to Tyrod Taylor.

Mayfield took over for the concussed Taylor just before halftime with a 14-0 deficit and proceeded to light up the night with a storybook NFL debut. He led a 21-17 comeback win to electrify FirstEnergy Stadium and end a 635-day winless streak for the Browns.

The careers of Darnold and Mayfield would go on to suffer similar setbacks, however.

Each quarterback had sporadic success to inspire hope. But one major difference was Mayfield played through everything, never missing a game, while Darnold kept getting hurt. He missed three games with a foot sprain in 2018, three with mononucleosis in 2019, and four with a shoulder sprain in 2020.

Mayfield’s perseverance was rewarded in 2020 when the football gods smiled on him.

Berry returned to the Browns as GM, wizened beyond his years after a season with the Eagles, and Kevin Stefanski was hired as coach. Together, they built a support system for Mayfield based on a strong offensive line and running game and a smart passing system to fit Mayfield’s skill set.

Darnold, meanwhile, labored for a second season under erratic coach Adam Gase in an offense without playmakers or invention.

Ironically, when they met for only the second time in their pro careers, in Game 15 last season, Darnold prevailed, 23-16. Mayfield was robbed of his top four receivers, starting left tackle, and two starting linebackers because of a Covid-19 outbreak. Mayfield was sacked four times and suffered three fumbles.

It served as a reminder that quarterbacks, for the most part, are the beneficiaries or the victims of those around them.

We'll never know for sure.

Yes, the Browns figured it out early enough to avoid dumping Mayfield on the quarterback scrap heap. But I think Mayfield’s inner toughness is a rare quality that Dorsey saw in him and did not see in Darnold, and it is a big reason Mayfield has overcome his adversity while Darnold has not.