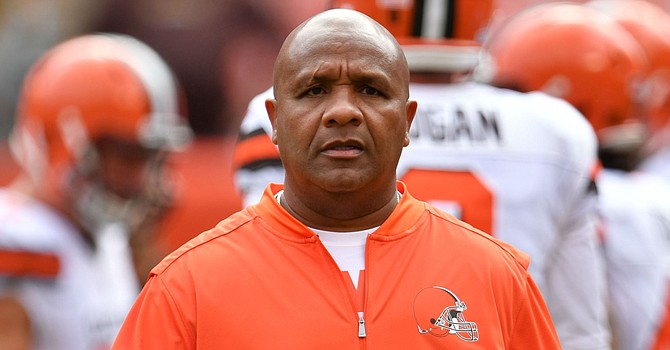 Hue Jackson made more revelations about his tumultuous time as Browns coach on two national podcasts on Wednesday. (SportingNews.com)

The Hue Jackson Revenge Tour rolled on Wednesday as he took to the national podcast platform to try to clear his name from his 3-36-1 record as Browns coach from 2016-18.

As a guest on Huddle & Flow, hosted by Steve Wyche and Jim Trotter of NFL Media, and Pass It Down, hosted by Michael Silver, also of NFL Media, Jackson disclosed more details of organizational dysfunction and division during his tumultuous 2 ½ seasons with the Browns.

Liberated from the expiration of his severance agreement, Jackson first went public Monday on the Really Big Show on 850 ESPN Cleveland.

Jackson said he has authored an account of his career and promised salacious details of his time in Cleveland with documentation. He has been coy in not revealing the title of the book, whether it has a publisher, or exactly when it will be released.

His national appearances on Wednesday provided more clues about what may be included in the book.

Hue the victim of an analytics experiment

Jackson vented frustration that he was held accountable for going 1-31 in his first two seasons, yet Paul DePodesta, chief strategy officer, and Andrew Berry, who assisted executive vice president Sashi Brown and is now Browns general manager, were not.

Jackson said on Pass It Down:

“People who were involved in 1-31 are now running that organization.

“I just think it was an experiment. They needed to find out the data to make better decisions in the future. There was nothing I could do. I didn’t have the power as a head coach to putting players on the team. I was getting blamed for everything.

“I think they saw me as a minority coach. I couldn’t see them doing this to one of my Caucasian colleagues. There’s no way. I get so disappointed when [people] say, ‘Sean McDermott was who they really wanted.’ Sean McDermott would have never took that job. I truly believe some [Browns coaching candidates] knew what they were going to do. They weren’t getting the other candidates that they wanted. I truly believe that.”

“My hard feelings are the two guys who are running it [now] were there at 1-31 and a part of all of this. So either they’re saying they did something right in order to still be there and being paid for what they did. Are you kidding me? If that’s the case, then I should be reverant, too, for doing exactly what they wanted to have happen, which was to lose.”

Jackson recounted that Brown, DePodesta and Berry were in unison in wanting to select quarterback Mitchell Trubisky No. 1 overall in the 2017 draft instead of Myles Garrett. This was the draft which also featured quarterbacks Patrick Mahomes and DeShaun Watson.

“Everyone knew we were needing a quarterback. Mitchell Trubisky was seen by the organization as the best quarterback in the draft. I did not agree with that. I fought extremely hard for Myles Garrett. It was a lot of bickering back and forth because I was not going to publicly or privately support the decision if we took Mitchell Trubisky.

“Obviously Sashi Brown was leading the charge with Andrew Berry and Paul DePodesta. That’s what gets me, the same people we’re talking about are being paid to run the organization today.”

Jackson said the Browns decided to select Garrett after Jackson insisted he would not support the selection of Trubisky.

“I was not going to stand out there if we took a quarterback I didn’t believe in and say I’m with this all the way,” he said.

Jackson previously said on Really Big Show that he received a contract extension midway through his second season with his record at 1-23.

On Huddle & Flow, Jackson said the extension came after a group of players complained to owner Jimmy Haslam that there wasn’t enough talent on the team.

“We had played the Vikings in London,” Jackson said. “There was a group of players who had a meeting with Jimmy and [wife] Dee and told them how they felt. That they needed to improve the roster. That we needed better players. They [the players] knew and understood what was going on.

“That same week, around Oct. 30, I was offered an extension in a room with my agent and my wife. Jim and Dee were there. Jimmy apologized to me and her for what we were going through.”

Jackson said that Haslam did not disclose the extension publicly – or to other members of the organization and the players – despite assuring Jackson that he would.

Jackson reiterated his biggest mistake was hiring Todd Haley as offensive coordinator prior to his third season in 2018.

On the first episode of the Browns’ appearance on HBO’s Hard Knocks during the 2018 training camp, Haley and then-running backs coach Freddie Kitchens challenged Jackson about giving players practice time off.

Jackson believes the two coaches, who worked together previously with the Arizona Cardinals, played up to the HBO cameras.

On Pass It Down, Jackson said:

“I would never head into a season or training camp and the coaches not knowing who’s going to practice. We had learned over my two years prior that the data said that if certain guys had soft tissue injuries, that they could get hamstring [injuries], we’d take care of them, we’d protect them. And we had no pulled muscles. That was all laid out in front of the staff way before we started practice.

“They probably wouldn’t have [brought it up except for the presence of HBO’s cameras]. Those two guys were different. I put them on the staff. At the same time, I also did all I could to remove one of them.”

Jackson said he wasn’t sure why Baker Mayfield turned against him, but he suspected Haley influenced Mayfield against him.

Jackson said the organization made the decision not to start Mayfield immediately as a rookie, partly because there was a problem replacing retired left tackle Joe Thomas and nobody wanted Mayfield exposed to injury.

Jackson said it was his decision alone to make Mayfield the top backup to starter Tyrod Taylor. He said some coaches wanted Mayfield third behind Drew Stanton.

“There were offensive coaches that didn’t want Baker Mayfield to be the backup. I made him the backup,” Jackson said on Pass It Down.

“I also think there were some people putting things in his ear about who Hue Jackson was. And he ran with it. One thing [Mayfield] said was, ‘You want everybody to like you.’ That has nothing to do with it.”

Asked on Huddle & Flow if he thought Haley specifically ‘poisoned’ Mayfield against him, Jackson said, “I don’t know, but I wouldn’t be surprised if some or all of those things are involved.”

Jackson was fired about a full year after his contract extension in 2017.

With tension boiling over between Jackson and Haley, Jackson said that Haslam told him on the Wednesday before Game 8 against Pittsburgh in 2018 that Haslam intended to fire Haley.

“Jimmy told me on Wednesday before we played Pittsburgh that regardless of the outcome of the game we were going to move on from Todd. I’d never been more excited in my life. I talked to two coaches on my staff and told them. I felt relieved [because] we’re going to have a chance to move forward here. We’ll get this offense together.

“Sure enough, we play Pittsburgh, we lose. I was feeling good driving to the building [the next day] because I’m thinking Todd’s going to be gone. Because I thought that was holding us back.

“Then that morning, I can’t find anybody [in the building]. We have a staff meeting, I go back to my office and in walks [GM] John Dorsey and Jimmy Haslam. I got pissed off because I’m listening to John Dorsey telling me I lost the team. You gotta be kidding me. No, I have a coach that is creating an issue on offense that I need to get rid of.”