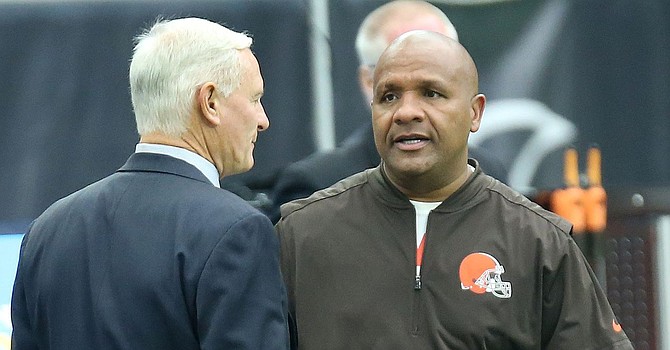 Hue Jackson accused Jimmy Haslam of lying to him and destroying his reputation as an NFL coach. (Cleveland.com)

Taking his case to the court of public opinion after compiling a 3-36-1 record in 2016-18 is a lose-lose proposition for both Jackson and the Browns.

Blaming the ruthless and then-amateurish analytics operation of Sashi Brown and Paul DePodesta for sabotaging his ability to win comes off as sour grapes. Jackson also portrays owner Jimmy Haslam as the head of an organization that lied to its coach and fans for the purposes of collecting data for future franchise growth.

Overall, Jackson paints the picture of what was reported and said at the time – the Browns were one dysfunctional organization, divided between a coach who wanted to win and an analytics operation that was experimenting with systems really untried before in the NFL.

While Jackson knows he can’t clear his name with Browns fans, he said he wanted to set the record straight to educate future minority coaches about avoiding the pitfalls that lead to failure.

The main message that Jackson wanted to deliver is actually right on. Minority coaches can’t afford to lose, because they don’t ordinarily get another chance. Or, they don’t get as many chances as losing white coaches.

So don’t take a job with little or no chance of winning, was his message.

“I was head coach in Oakland and after an 8-8 season the owner dies. I lose my job,” Jackson said. “I go to Cincinnati and I had to coach on defense, not on offense. After an 8-8 season and a top 10 offense – just let that sink in -- I had to become an assistant to an assistant. That’s the way it is for minority coaches when they are let go. They don’t land back to coordinator jobs. They don’t land back in consulting jobs like our Caucasian colleagues. It just doesn’t happen that way, for whatever the reason is.”

He is right about that.

Tony Dungy was an African-American coach who got fired (with Tampa Bay) and then got hired (with Indianapolis) because he won. A few others have been rehired, but there is no denying that a black coach with a losing record rarely gets another chance while a losing white coach more likely can keep finding high-level jobs as a head coach or coordinator.

Leslie Frazier and Todd Bowles are two minority coaches who had losing records as head coaches, and then rebounded as successful coordinators. Anthony Lynn and Romeo Crennel are others. But they are exceptions.

Jackson said he wasn’t worried about clearing his name.

“This is bigger than just coaching,” he said. “For me, this is going to be part of my legacy. That ‘Hey, he stood up and really put it out there, exactly what went on.’ Maybe this will help another minority coach as he transcends into this profession and rises to the opportunity of being a head coach.”

2.Jackson’s most explosive comments were targeted at Haslam.

He charged the owner with lying to him about promising him a voice in personnel, not being transparent about the plan to tear down the roster before building it up, declining to make public that he gave Jackson a contract extension during his winless second season, and then portraying Jackson as a coach who did not want to collaborate with the analytics department.

“There’s no doubt I was lied to by ownership and by the executive team,” Jackson said. “The bottom line is, they were determined in proving scouts and coaches wrong.”

Jackson said that Haslam gave him a contract extension after going 0-8 in his second season – lowering his Browns record to 1-23 – and that Haslam would not disclose the extension publicly, even though he told Jackson he would make it public.

When Jackson was fired midway through his third season, Haslam used the phrase “internal discord” for making the move.

“To me, that was a nuclear bomb that destroyed my name, my reputation and my career,” Jackson said. “And Jimmy Haslam was the one that dropped that bomb. I texted him and said you know there was no discord, and he said, ‘The comment was taken out of context.’ Are you kidding me?”

3.The real turning point in Jackson’s tenure was when Brown was fired and replaced by GM John Dorsey.

Dorsey instantly upgraded the roster, a fact Jackson acknowledged in the interview.

“When John Dorsey got there, that’s when real football players started playing in Cleveland,” Jackson said.

At his annual season preview press conference at the beginning of the 2018 training camp, Haslam doubled-down on his faith in Jackson while deftly putting the coach on notice.

“I think we will see the real Hue Jackson,” Haslam said then. “He has good quarterbacks, he has some skill players, he has a veteran offensive line … and three really good backs and a good defense.

“I think this will be the first opportunity Hue will have to do what we know he can do as head coach and as a leader.”

4.The quarterback foibles during Jackson’s tenure doomed him as much as anything.

Jackson tabbed Robert Griffin III as his first QB and then was provided by Brown and DePodesta Cody Kessler, DeShone Kizer and Brock Osweiler.

Jackson’s “trust me on this one” comment when Kessler was drafted in the third round in 2016 has become an epitaph on his coaching gravestone.

“We worked out Jared Goff and Carson Wentz. I never worked out Cody Kessler,” Jackson said. “If I say I don’t like this pick, that’s an atomic bomb. I did not know what to say. I coached at USC. You think I didn’t know who that player was? Was I happy with that pick? Absolutely not. I know who quarterbacks are. That’s what I was going for a living. That’s not who I would have drafted at that spot. That’s what analytics draft.”

Dorsey brought in Mayfield with the first overall pick in 2018. In truth, Jackson had little voice in that selection – and Mayfield knew it. At the same time, the arrival of Todd Haley as offensive coordinator distanced Jackson from Mayfield.

“That was a bad marriage. I will walk away saying I never should have did that,” Jackson said of naming Haley coordinator.

Mayfield seemed to bond with Haley and lose respect for Jackson.

“The Baker situation, to this day, I will never understand it,” Jackson said. “I was a part of making him the first overall pick. All I can think of, here’s a Heisman trophy quarterback that walks into a building looking at a coach who’s 1-31. You cannot stand and lead very much longer when you don’t win.

“And I wasn’t coaching Baker. Baker had a quarterback coach and a coordinator. I didn’t spend a lot of time with him. Matter of fact, I met with him one time in my office watching football after the first game to really start to get a thought process about how he saw things.”

5.Jackson said his book with more gory details of his time as Browns coach, including documentation, will be published this year.

It should be of interest to any Browns fan. But it will also serve as a record of how far the Browns have come.

The Jackson era is in the rear-view mirror of a franchise certifiably on the rise. Along the way were many casualties, of which Jackson was one.

Did Jackson get a raw deal? Absolutely. But he was hardly the only one. The list is long.