Despite Early Struggles, Browns Can Be Where They Wanted To Be With Rare Win In Baltimore 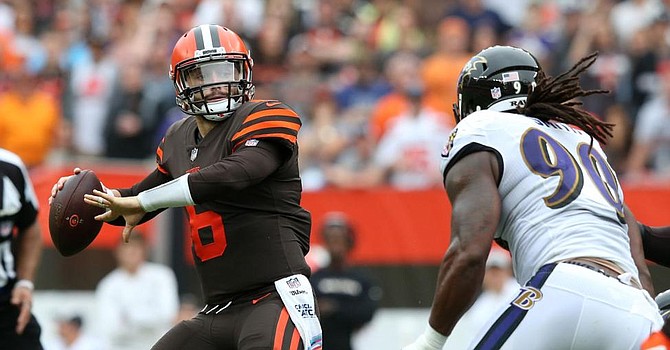 Hated that ugly slice out of bounds on the first tee, that 43-13 debacle against the Tennessee Titans in the season-opener? Well, the golf gods have given the Browns a mulligan. Consider this date against the division rival Ravens, defending champs of the AFC North, a re-start to the 2019 season. It is the first division game of the year, after all. And should the underdog Browns somehow produce their first victory in the Giant Crabcake since 2015, they would be sitting right where they and their fans wanted to be – in first place in the division (1-0) and 2-2 overall. And the narrative of the Browns being who we thought they were would take on a different meaning. Just how long has it been since the Browns won in Baltimore should give you an idea of the task at hand. That 33-30 Browns win in overtime remains the only defeat handed to John Harbaugh on his home field in 11 meetings since he became Ravens coach in 2008. Josh McCown set a Browns regular-season record with 444 passing yards, Gary Barnidge was the star receiver, and Travis Coons kicked the game-winner in OT. Yes, it’s been that long.

Lamar Jackson won the Heisman Trophy as a sophomore at Louisville in 2017. Baker Mayfield grabbed the trophy a year later after his third and last season at Oklahoma in 2018. When Mayfield became the No. 1 overall pick in that year’s NFL draft, he was anointed – by himself and long-suffering Browns fans – as the franchise savior. Jackson’s selection in the draft 31 spots later by Baltimore fell after draft enthusiasts were fatigued with arguments about the best quarterback in the draft. Was it Mayfield or Sam Darnold or Josh Allen or Josh Rosen? Very few, if anybody, put Jackson in that discussion. Fast forward into their second seasons. Jackson’s the only one to appear in a playoff game and has the best overall record as a starter (8-3). Mayfield is next (7-9). Jackson beat Mayfield in their first meeting in Game 16 last year, setting the tone with two rushing touchdowns before Mayfield’s arm made it close. The game ended when Mayfield failed four times to complete one last pass to give the Browns a reasonable game-winning field goal attempt. Now in their second meeting, Jackson has widened the gap in the discussion of “best QB of the 2018 draft.” Jackson, nicknamed Baby Vick this week by Browns D-tackle Sheldon Richardson, is riding high as a state-of-the-art NFL offensive QB playmaker, who happens to be surrounded by Mayfield’s blue-chip former OU teammates -- Mark Andrews, Marquise Brown and Orlando Brown Jr. Jackson has not committed a turnover this season. All the while, Mayfield is mired in a slump and reduced to Twitter-feuding with Antonio Brown. Who’d have thunk it?

Third down: Safety in safeties.

The Ravens have three excellent tight ends in Andrews (Jackson’s favorite receiver with 19 receptions for 235 yards and two touchdowns), Nick Boyle (8 for 98), and Hayden Hurst (6 for 56 and 1 TD). The Browns are so deficient at this position group that they have had to practically game-plan away from the tight end, and Mayfield has suffered as a result. At the same time, however, the Browns are configured better on defense than in recent memory to defend a tight end-oriented offense. They loaded up with five safeties on their final roster. Attrition will claim strong safety Morgan Burnett (quad) for this game. But the addition and emergence of Juston Burris last week leaves five healthy safeties, anyway – Burris, Damarious Randall, Jerome Whitehead, Eric Murray, and Sheldrick Redwine. Defensive coordinator Steve Wilks loves safeties who can tackle in the run game and cover in the pass game. It happens to be the strategy the Los Angeles Chargers employed to throttle Jackson’s run/pass options in an AFC divisional playoff game in January. I asked Wilks if he intended to follow the Chargers’ template, and that is why he loaded up on safeties. “It’s not trying to emulate what the Chargers did,” he said unconvincingly. “We’re just trying to put our guys in the best position to be successful. You have to stop the run first with Jackson as well as [running back Mark] Ingram.”

Fourth down: Twelve on eleven.

In last year’s Game 16 meeting, the Ravens raced out to a 20-7 halftime lead by combining their physical blocking with Jackson’s dazzling running ability. The Ravens racked up 179 yards rushing in the first half; Jackson had 64 and two touchdowns. The Gregg Williams’ defense adjusted to Jackson in the second half, limiting him to 26 yards on 11 runs. But the Browns never could stop natural backs Gus Edwards (40 yards, 6 attempts) and Kenneth Dixon (38 yards, 7 attempts). In all, the Ravens’ running game mashed out 296 yards on 47 attempts. The benefit of having a running QB is that it gives the offense a 12th attacker and it’s nearly impossible to stop everybody running the ball. Wilks explained, “It’s a college offense, really, what [Jackson] did at Louisivlle, and [offensive coordinator] Greg Roman, his background with [Colin] Kaepernick when he was at San Francisco. Whenever you have the element of a quarterback being able to run the ball, it just adds an extra blocker.”