Would A Tandem Of Todd Haley And Freddie Kitchens Have Been The Better Way For The Browns To Go? 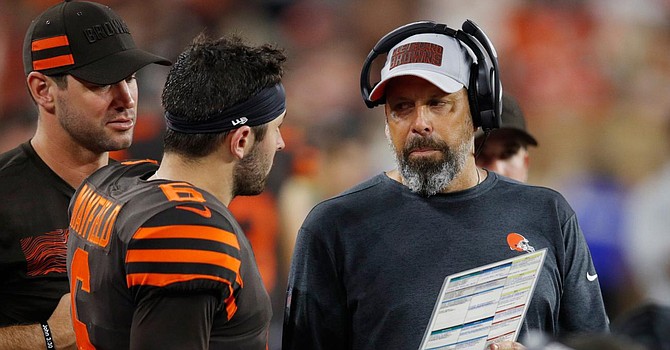 Todd Haley had a breif stint with the Browns, maybe it should've been longer.

1.The Browns have now played 16 games since they fired Hue Jackson in the middle of the 2018 season. Their record in those games is 7-9. If I could redo one move they’ve made in that time it would be this: They shouldn’t have fired Todd Haley. In retrospect, a set-up with Haley as head coach and Freddie Kitchens as offensive coordinator probably would be serving Baker Mayfield and the whole team better than the present one. Let me explain.

2.Haley was the offensive coordinator Jackson hired before his third season. A former head coach with the Kansas City Chiefs, Haley’s contract as offensive coordinator of the Pittsburgh Steelers the previous six seasons was not renewed, essentially because he was making too much money. Haley was a branch of the Bill Parcells coaching tree. He was a disciplinarian, as gruff as coaches come. He and Jackson weren’t exactly a great personality match, but GM John Dorsey recruited a reluctant Haley to take the job when Jackson offered it.

3.Haley is the person who recruited Kitchens to the Browns. They worked together one season in Dallas under Parcells, and then Kitchens followed Haley to the Arizona Cardinals. They were together as assistants in a Super Bowl season in 2008, Haley the offensive coordinator and Kitchens the tight ends coach. The offense Kitchens ran last year is rooted in the one he learned under Haley, although Kitchens has since added his changes.

4.Haley famously challenged Jackson’s lax practice methods in the inaugural episode of Hard Knocks in 2018. Kitchens participated in that infamous discussion, too. It was a harbinger of the differences Haley had with Jackson’s soft approach to running a team. Haley was brought up under Parcells to be tough with players and to instill discipline. He wasn’t concerned with players liking him.

5.Mayfield immediately had respect for Haley, whom he saw as authentic. In one of their first meetings, Haley wrote on a grease board one of Parcells’ most famous phrases: “No celebrity quarterbacks.” The point was that a quarterback had to concentrate on and master the myriad aspects of his job before enjoying the celebrity of the position. This would be a lesson lost on Mayfield in his second season.

6.Haley was bringing along Mayfield and the offense slowly but surely in the 2018 season. Kicking failures and Jackson’s mind-boggling game decisions cost the Browns, conservatively, three wins in the first eight games. A 2-5-1 record easily could have been 5-3. But the die was cast, and Jackson was fired on Oct. 29, 2018.

7.Haley privately and publicly disagreed with the way Jackson did his job. He thought Jackson took unnecessary risks in games and was way too lax in disciplining his players. He thought the team should grind out wins any way it could while Mayfield was learning on the job. If that meant punting and living for another series, that’s the way it was. If that meant kicking field goals instead of going for it on fourth-and-2, so be it. The team had to learn how to win.

8.When Jackson was fired, Haley thought he’d be named interim coach. But he was fired a couple hours after Jackson. It shocked him. The timeline in those two moves suggests there was deliberation about whom to name as interim coach. Ultimately, defensive coordinator Gregg Williams got the interim job and Kitchens, the running backs coach, was promoted to offensive coordinator to continue weaning Mayfield in the Haley offensive system.

9.The Browns went 5-3 after Jackson was fired. In the coaching search that followed, Williams got the first interview and Kitchens the last. Williams’ was a courtesy interview. He was never a serious candidate in the minds of Dorsey and his closest advisers. At the same time, Dorsey felt Mayfield was best served by keeping Kitchens in an influential offensive role.

10.The best solution was to keep Kitchens as offensive coordinator and pair him up with an experienced head coach. Mike McCarthy, the fired Green Bay Packers coach, was not interviewed. Neither was Bruce Arians, with whom Kitchens had worked in Arizona. Arians campaigned in the media for the Browns job, even saying at the end that he would be happy to accept Kitchens as offensive coordinator. But Arians and Kitchens had been on bad terms since Arians demoted Kitchens from quarterbacks coach in Arizona. An Arians-Kitchens marriage never had a chance.

11.If the Browns had made Haley the interim coach, instead of Williams, they might have achieved the perfect solution. We don’t know how Haley would have done as interim coach. He had his quirks, too. But the fact is his attention to detail and old-school approach to discipline would have been a perfect complement to Kitchens’ player-friendly philosophy.

12.After the Browns named Kitchens head coach, they traded for Odell Beckham Jr., one of the most dominating personalities in the NFL. Beckham joined long-time soul mate Jarvis Landry – no shrinking violet himself – to form a formidable receiver tandem, but also a domineering dynamic in the huddle. While Mayfield publicly said it would make his job easier, the opposite, in fact, happened. Still learning how to adjust to different defensive looks, Mayfield was saddled with the pressures of keeping his demanding receivers happy.

13.As offensive coordinator of the Steelers, Haley had the experience of managing the egos of offensive stars in Pittsburgh. Under Haley, quarterback Ben Roethlisberger, running back LeVeon Bell and receiver Antonio Brown produced some of the most explosive offenses in recent NFL history. Ben, Bell and Brown had their best years under Haley. After Haley left Pittsburgh, that trio blew up in a terrible clash of egos.

15.If Haley had finished the 2018 season as interim coach, he very well would have claimed the permanent job. The Browns could have accomplished their goal of keeping Kitchens in charge of bringing along Mayfield. That was more than enough responsibility for Kitchens, who had never managed an offense, much less a full team, before his emergency promotion the year before. And because of his experience, Haley and the Browns would have had a better chance of living up to the lofty expectations that transpired. I don’t think the Browns would be nearly as undisciplined, disorganized and disjointed as they are now.