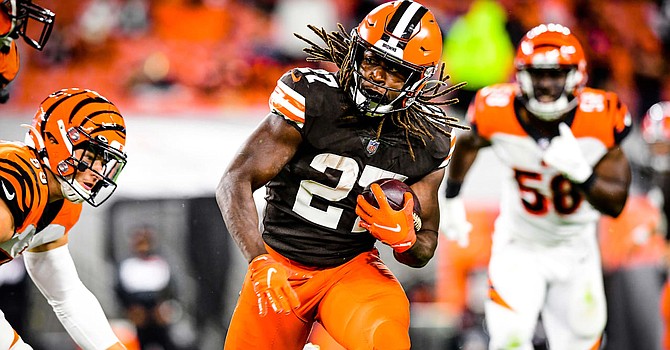 Kareem Hunt and Nick Chubb showed again on Thursday night why they should be the identity of the Browns. They may shatter the combined rushing total record of two 1,000-yard rushing teammates. (Cleveland Browns)

Is it too early to ponder the possibility of Nick Chubb and Kareem Hunt each rushing for more than 1,000 yards?

Those numbers would easily surpass the record for teammates eclipsing 1,000 in the same season.

It’s too early to even ask about accomplishing what once was considered unthinkable – even in the NFL’s caveman era. But you had the feeling after Chubb and Hunt pummeled the Bengals on Thursday night for 210 yards total – including 152 in the second half – that the pair has much more to give.

“I feel like we are game-changers, and moving forward, I would like to continue to get more touches. The both of us need them. We both make plays,” Hunt said after Thursday’s game.

Necessity the mother of invention

When Mack and Byner combined forces in 1985, they were coach Marty Schottenheimer’s best hope of changing the team’s culture. The last remnants of the Kardiac Kids had faded with the firing of coach Sam Rutigliano. The Bernie Kosar era was underway. But Schottenheimer realized it was too soon to make Kosar the identity of the team. The line needed to be rebuilt and receivers needed to be found.

So he pounded Mack and Byner because it was the shortest route to respectability. They became the heart-and-soul of the team, each selflessly encouraging and challenging the other. The Browns plowed to an 8-8 record and a playoff berth.

That was then and this is now.

Kevin Stefanski has an embarrassment of offensive weapons at his disposal. He has a pair of 1,000-yard receivers in Jarvis Landry and Odell Beckham Jr. He has three receiving tight ends in Austin Hooper, Harrison Bryant and David Njoku. He has a sturdy offensive line coalescing in a wide-zone blocking scheme anchored by two first-round tackles. And he has a quarterback in Baker Mayfield taken No. 1 overall in his draft.

Stefanski has all that talent. Yet Chubb and Hunt arguably are the class of them all.

Chubb should have won the NFL rushing crown last year and Hunt did it with Kansas City in 2018.

In the 35-30 win over the Bengals, Stefanski followed the mantra, “Throw to score, run to win.”

Mayfield built a 21-13 lead with an 11-of-14, 167-yard, two-TD first half. And then Chubb and Hunt dominated the second half. Mayfield threw only nine times in the second half, completing five.

“Throw to score, run to win” suggests using the running game to eat the clock and ice an opponent in the second half. That’s not what Chubb and Hunt do. They don’t merely possess the ball. They punish defenses.

Hunt had one carry for 6 yards in the first half; nine for 80 in the second half. Unleashing a back of Hunt’s stature, with his energy and power and freshness, against a tiring defense in the second half, is a significant advantage for a play-caller.

Keep in mind, this was just the way the backs were used against Cincinnati.

Chubb, for one, believes Hunt should have a greater role earlier in games.

“Honestly, Kareem is a great back,” said the selfless Chubb. “I think we should get him more involved earlier in the game, rather than how it happened tonight. You see what he can do – (10 carries for 86 yard). We definitely need to get him involved early.”

There is also the question of what Stefanski might do with the Browns behind on the scoreboard, rather than ahead.

In Baltimore, Stefanski chose to throw the ball to catch up. But if Chubb and Hunt are clicking behind that constantly-improving offensive line, why shouldn’t Stefanski put the ball in the hands of his unique backs even when behind?

Plus, there is the Janovich factor. Mack and Byner alternated as fullbacks in the 1985 offense. Janovich gives Stefanski the creative option of using three backs at times – in a wishbone formation, or flexing Hunt to a slot receiver or outside receiver position. All of it gives Mayfield a plethora of play-action options.

The creative possibilities are real, especially with Hunt’s run-after-catch ability and Chubb’s improvement as a pass catcher.

I used to think that a pair of 1,000-yard rushers was a product of a caveman offense deficient in the passing game.

Now I think it is an ahead-of-the-curve asset of the Browns that not only should be the team’s identity but also fuel it to the next level.

The best Browns teams have always had great running backs. I’m not sure any Browns team has had a pair quite like Chubb and Hunt.