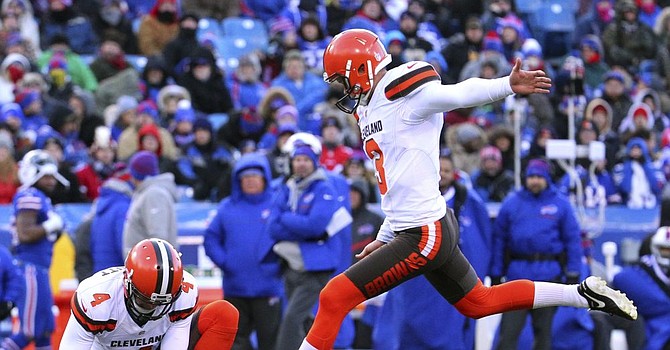 Kicker Cody Parkey is among three players placed on the Covid-19 reserve list because of high-risk contact with someone who tested positive. (BrownsZone.com)

As the coronavirus surges through all of society, so too it permeates the Browns on a daily basis.

Three more players were placed on the Covid-19 reserve list on Wednesday, bringing that number currently to five.

Right tackle Jack Conklin, kicker Cody Parkey and long snapper Charley Hughlett reportedly were identified as high-risk contacts to someone who tested positive. They could return as soon as Friday if they test negative two times separated by 24 hours.

The status of offensive tackle Chris Hubbard, who reportedly tested positive on Friday, and fullback Andy Janovich, who tested positive on Monday, remain unclear. The team has not commented on if they are experiencing symptoms. At the least, they must stay isolated a minimum of five days after their positive tests.

Even if all pass through the protocols smoothly and are cleared for Sunday’s game against the Philadelphia Eagles, they are missing the bulk of the practice week and the Browns must plan for the worst.

“We are all [hopeful] we can get them back,” said running back Nick Chubb. “Of course, this year is so crazy. You don’t know what is going to happen. You have to be prepared either way. We have a next-up mentality here, so whoever is there is going to be great for us, no matter who it is. If we can get JC [Tretter, excused for personal reasons] and Jack back, that would be even greater.”

The likely replacements would be these:

The Browns use the fullback more than most teams. Janovich’s 108 snaps on offense rank ninth among fullbacks.

Coach Kevin Stefanski listed three options to replace him – substituting a tight end as a lead blocker, elevating fullback Johnny Stanton from the practice squad, or using a halfback, which likely would unite Nick Chubb and Kareem Hunt in the backfield together.

“Those are things that we are talking about doing,” Stefanski said.

Chubb has received a lot of praise nationally for his selfless act of stepping out of bounds one yard shy of a 60-yard touchdown to ice the 10-7 win over the Houston Texans, rather than score and extend the game.

Still, the 59-yard run pushed Chubb’s game total to a season-high 126 yards on 19 attempts and helped to solidify his confidence playing for the first time in five weeks after a sprained MCL.

“It felt good to get out there and actually get tackled,” Chubb said. “I knew coming in last week that I felt good, but I haven’t gotten hit in about five weeks. Going out there and playing a full game and having no troubles with it, it brings a lot of confidence in it.”

The run also enabled Chubb and Kareem Hunt to become the first pair of Browns backs to each top 100 yards rushing in the same game since Leroy Kelly and Ernie Green in 1966. Hunt had 104 yards on 19 attempts.

“It felt great just to be able to go out there and ball out with my boy,” Chubb said. “That is definitely huge for us and for this team and organization. Hopefully, we get plenty more of them.”

“We have not talked about it yet,” Chubb said. “I am sure Coach Stump [Mitchell, running backs coach] definitely wants us to get it. He is big on us being the best person we can be, and he is also big on us breaking records and things like that. I definitely think we will hear about that soon enough.”

Quarterback Baker Mayfield spent a few days in self-isolation on the Covid-19 reserve list coming out of the bye week, and he believes that time can be put to good use.

“When you are sitting there at home, you want to be at practice and you want to be with everybody, but to me, it kind of makes you lock in a lot more mentally because you know you are not getting the physical reps,” he said. “With the guys that are in the protocol right now, I think they will handle it just as that is.”

The Eagles have no regrets in trading five draft picks to the Browns to move up to No. 2 in the 2016 draft and select quarterback Carson Wentz.

Wentz led the Eagles to an 11-2 record before suffering a torn ACL in 2017. Backup Nick Foles replaced Wentz and completed a magic carpet ride with a Super Bowl victory over the New England Patriots.

Wentz peaked before the injury, and now is in the midst of his worst season in his five years with the Eagles.

The Browns parlayed the five draft picks into 13 players via seven additional trades over the next three years. The only player active from that haul is cornerback Denzel Ward.

Defensive end Myles Garrett stayed home because of illness. He did not test positive for Covid-19 and his absence was a precaution. “You know how it is when guys are sick. It is not like the old days where you say, ‘Alright, come on in later in the day.’ You can’t do that,” Stefanski said …

Center JC Tretter was excused from practice for personal reasons.