Browns Are Winning Despite Anemic Second Halves By Baker Mayfield 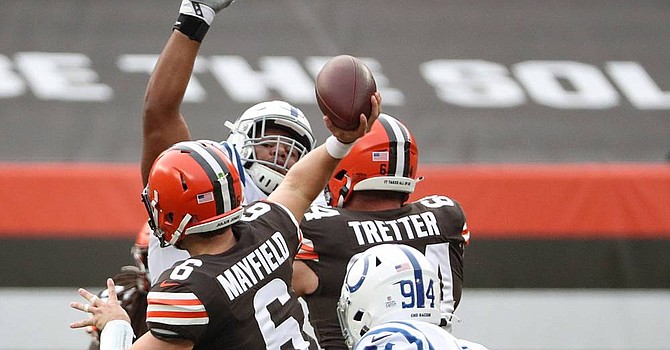 Baker Mayfield's passer rating is more than 80 points lower in the second halves of the Browns' four wins. (USAToday)

One of the most baffling aspects of the Browns’ winning season has been the Jeckyll-and-Hyde nature of quarterback Baker Mayfield.

In the first halves, Good Baker has been on point with throws, nimble inside and outside the pocket, solid with his progressions, assertive, productive and careful with the ball.

In the second halves, Bad Baker has been wildly inaccurate, seemingly confined in the pocket, visually impaired at times, unconfident with leads, impatient and out of rhythm.

The numbers tell the story of two quarterbacks. Let’s look at just the last four games – all victories.

The Browns are one of the most analytically-inclined organizations in the NFL. They base a vast majority of decisions – if not all -- on data derived from mathematics and algorithms. So, there's no doubt they are keenly aware of the dichotomy in Mayfield’s games.

But coach Kevin Stefanski failed to offer a good explanation of what is exactly going on with Mayfield in the second halves of games.

“First of all, I think I can do a much better job as a play-caller in these moments where we need to get into a rhythm and get the offense into a rhythm,” Stefanski said. “There are some calls that I really want back. I know I can do a better job.

“I think you saw in that first half [against the Colts], [Mayfield] did a nice job. We were able to move the ball, and then for a bunch of reasons, we were not in the second half, but I would put a lot of that on me.”

Mayfield’s post-game comments after the 32-23 win over the Colts disagreed with his coach.

“I think that was the worst game I have played out of the five so far,” he said on Sunday. “I have to get better.”

Stefanski was right about one thing. There are going to be games in which the offense will have to open up in the second half to win.

They hope that Good Baker shows up then.

Right guard Wyatt Teller has earned accolades all year after unfairly being pegged as the weak link of a strong offensive line. But when Teller had to leave with a calf injury late in the first quarter, sixth man Chris Hubbard plugged in seamlessly.

Stefanski termed Teller’s status “week to week,” which probably means he won’t be able to play in Pittsburgh. Which probably means Hubbard will start at right guard – a position he has played, obviously, but never started at in 73 career NFL games.

Hubbard started 29 games at right tackle for the Browns in 2018-19. But after the Browns signed free agent Jack Conklin to a three-year, $42 million contract this year, Hubbard agreed to about a $5 million pay cut and a reduced role.

His value as a sixth man able to play all five positions on the upgraded O-line already has been felt.

He started for an injured Conklin at right tackle in the 35-30 win over the Bengals.

And in his emergency stint at right guard on Sunday, Hubbard pulled to the left and helped spring D’Ernest Johnson for a 28-yard run with a Teller-like killer block on a third-and-9 carry just before the 2-minute warning.

It was the longest offensive play of the second half for the Browns and helped preserve the victory as Mayfield was leaking oil.

Hubbard often does individual work at center after practice – just in case he is needed on Sunday. But last week he took exactly one rep at guard.

“I can’t say enough good things about Chris,” Stefanski said. “He is a key member of our social justice committee. He is a great teammate. His teammates really respect him. He does anything you ask of him. It is just kind of the makeup of Chris Hubbard.”

Hubbard never felt discouraged after being asked to take a pay cut and demotion after Conklin was signed.

“Not at all,” he said, cheerfully. “This is a business. I know that for a fact. You have to constantly just be ready. No matter what, this game is going to have its changes. Jack is doing a great job handling his job. I am just here to continue to fill the role and continue to help this team win no matter whenever they need me. I would kick the ball if they asked me to kick the ball.”

Stefanski confirmed that Mayfield’s ribs were sore after taking a shot from Justin Houston before his second interception in the fourth quarter, but he was typically stoic about his playing status for Pittsburgh. X-rays on the shoulder were negative. “We will see how he works through it this week,” Stefanski said …

Cornerback Greedy Williams, who hasn’t played after injuring his right shoulder in the first tackling drill of training camp on Aug. 24, was placed on injured reserve. Stefanski said the injury involves a nerve in the shoulder. “There is no surgery required at this point. There is potential that he is back this year. We just do not know,” Stefanski said …

Safety Ronnie Harrison, who had a 47-yard interception return for a touchdown in his first start for the Browns, is in concussion protocol …

Stefanski said he is hopeful for the return of defensive tackle Larry Ogunjobi (abdomen) and safety Karl Joseph (hamstring) after they missed the Colts game, but the status of linebacker Jacob Phillips (knee) is uncertain.