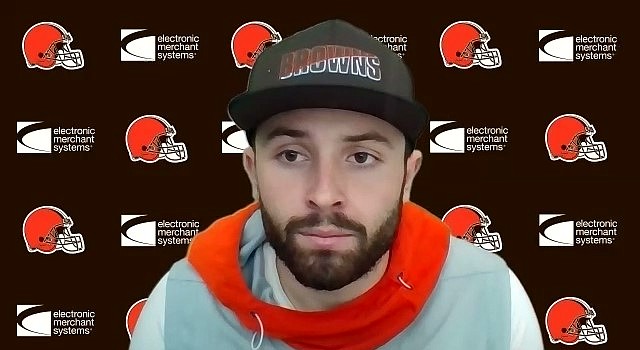 Refreshed from the bye week, healed of sore ribs and cleared from Covid-19 protocols, Baker Mayfield returned to work on Wednesday with raised expectations.

“I think he is ready to ascend,” coach Kevin Stefanski said.

Mayfield hit the halfway point of his third season with a 5-3 record – his best mark yet through eight games.

Other less meaningful statistics were lagging, however. Mayfield ranked 29th in completion percentage, 26th in average gain per pass attempt, 26th in interception percentage, and 26th in passer rating.

During the bye, Stefanski said that offensive coordinator Alex Van Pelt had meetings with Mayfield to discuss play designs and play calls to “help him” get better.

What does Stefanski want Mayfield to be better at?

“Continue to play at a level where we are winning football games, first and foremost,” he answered. “Then I think, statistically, as we all pull apart our own performance, you are going to look at areas and say, ‘Hey, I want to have a better completion percentage. I want to take care of the ball,’ or whatever it might be. For all of our guys, we tried to identify a few things that we can do better.”

Mayfield sounded most intent on improving his 61.4 completion percentage and reducing his 3.1 interception percentage (seven INTs in 223 pass attempts).

“For me, looking at missed throws, some of the things and turnover plays and looking at the reasons why and just kind of reevaluating that and be extremely critical of that,” he said of his self-evaluation.

“Looking back at what we could have done better and learning from that, what we do well, what we don’t do well, what we can grow from and just all those things. For me personally, looking at those turnovers and the negative plays to see if it was just a physical mistake, a real decision error or things like that.”

Mayfield was asked his take on Stefanski’s statement that he is “ready to ascend.”

“I would just say I am continuing to put my head down and work,” Mayfield answered. “Like I said after the game against the Raiders, we are not anywhere near where we want to be, and I think that is the positive outlook on it that we are going to continue to try and get better and work and work.”

As he heads into the final eight games critical to the Browns’ playoff chances, Mayfield will have all his resources available with the exception of Odell Beckham Jr.

(Chubb did not appear on the participation report because he has not been formally activated to the main roster, just designated for return from IR.)

“I am excited to take this thing one game at a time,” Mayfield said. “I think our guys used this week to kind of hit the reset button, refresh and get back to work. We are excited about this back half of the year and the grind that it is going to be.”

Chubb wore a brace supporting the right knee that suffered a sprained MCL against Dallas on Oct. 4. He said he was excited to run again and end the boredom of solitary rehab.

He is grateful the injury was not nearly as severe as the one on the left knee that he suffered his sophomore season of 2015 at Georgia. He tore three ligaments in the left knee – but not the ACL.

“This was nothing compared to what I have been through in the past. It was just maybe like a little hiccup,” Chubb said.

Chubb suffered the injury when Cowboys tackle Trysten Hill rolled over Chubb’s right leg away from the ball late in the first quarter.

“When it first happened, I was not sure exactly what happened,” Chubb said. “I know what it did feel like the first time I hurt my knee [at Georgia] so I knew it was not that severe. I was able to walk off the field, and I did not really feel anything. I never really had pain at all in my knee – a little loose, but other than that, it has always felt good, and that gave me confidence from the beginning that I knew I would be able to come back and play to be 100 percent healthy, which I think has come along well.”

Teller said the rehab from his Grade 2 calf strain suffered in the Colts game on Oct. 11 took longer than he expected and enabled him to self-evaluate his game.

In the time he and Chubb were out, the Browns’ running game dropped from No. 1 in the league to No. 5. He and the line want to boost it back to the top spot.

“Yeah, of course. That is Coach’s goal. That is our offensive line goal,” he said.

“I do not view it as a we can’t do it or it is too far or it is unattainable.

“I won’t put it on a single anybody … But Nick, Nick is damn near superhuman. He is a good player.”