The Road To The Afc North Title Runs Through Pittsburgh 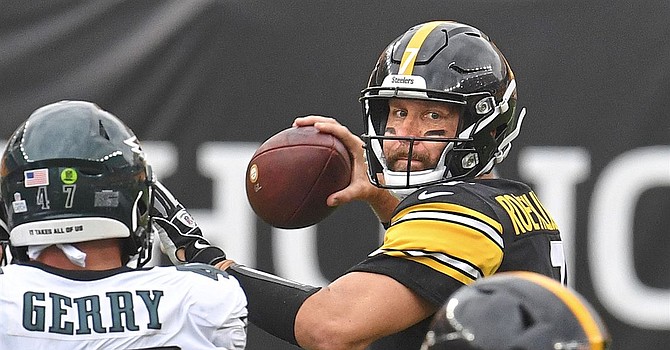 First down: This magic moment.

The Browns have lost 16 games in a row in Pittsburgh. They don’t like to talk about it. “We are not worried about the past. We are worried about right now,” said Baker Mayfield. But they can learn from the past. From 1970 to 1985, the Browns lost 16 games in a row in Pittsburgh. In that time, the Steelers won nine division titles and four Super Bowls. The Browns had some good years, too, but they couldn’t get past the Steelers. Until they did in 1986. And once they broke that psychological barrier of beating the Steelers in Pittsburgh, they ruled the division for the next four years. So now the Browns confront another 16-game losing streak in Pittsburgh. The Browns are in surprising playoff contention and Pittsburgh is at the top again. “This will be a defining game for both of us,” Myles Garrett said. “How the rest of the season will play out will probably be resting on this game because of how much importance it plays for where we will be in the division and who will fall.” The Browns’ fast start positions them to compete for a playoff spot no matter what happens in Heinz Field. But in order to win the division title, the Browns have to knock off the Steelers on their home field. Since the AFC North was created in 2002, only twice in 18 years has a team won the division without winning its game in Pittsburgh. So the history lesson to Mayfield and his teammates is this: Just like in the 1970s, the road to the division title runs through Pittsburgh.

The night he was drafted first overall in 2017, Garrett endeared himself to Browns fans when he voiced awareness of Ben Roethlisberger as the No. 1 Browns nemesis. Garrett said he was coming to Cleveland “to chop him down.” Because of injuries, suspensions and other circumstances, Garrett and Roethlisberger have competed in only two games together in three years. In 2017, Garrett missed the first meeting with a high ankle sprain and Roethlisberger skipped the second one to rest for the playoffs. In 2019, Roethlisberger missed both games with an elbow injury, and Garrett was out in the second one because of a league suspension. Their only two meetings on the field together occurred in 2018. One ended in a tie, and Roethlisberger won the other, extending Roethlisberger’s record against the Browns – who snubbed the Ohio-native in the 2004 draft – to 23-2-1. In the two meetings, Garrett sacked Big Ben three times, forced two fumbles and influenced two interceptions – but they weren’t enough to produce a win. “I feel like I have gotten him a couple times personally, but us as a team, we have to pick it up and get some wins in their house,” Garrett said. “We have some confidence going in, and I know they are confident with the record they have. It will be a good AFC matchup. I believe in the guys we have in our room, and I think we can beat them.”

Third down: What’s Stefanski got cooking?

Kevin Stefanski has been a master chef in manufacturing winning game plans tailored to his team’s strengths and weaknesses. He’s done it mostly by being aggressive offensively early to build leads and then relying on his offensive line and running game to preserve the leads in the second half. Stefanski has limited the role of his quarterback in the second halves. As a result, Mayfield has been a starkly different quarterback in the second half of the four wins – erratic, impatient and out of rhythm. Mayfield’s passer rating in the first half of the four wins is 119.8. In the second half, it is 38.4. He has not attempted more than nine passes in the second half. His average second half stat line is 4 of 8 passing for 40 yards. Not impressive, yet Mayfield just completed a four-game winning streak – tied for the longest in the Browns’ expansion era. Stefanski said, “He is doing what it takes to win.” Can it continue with the quarterback merely hanging on in the second half? There will come a time when Mayfield is going to have to do more at the end of games for the Browns to win. This may be the time – unless Stefanski is able to scheme away from it.

The Browns’ problems at safety began when rookie second-round draft pick Grant Delpit suffered a season-ending Achilles injury in training camp. The injury disrupted coordinator Joe Woods’ plans to incorporate a three-safety alignment as his predominant base defense. As a result, the regular safety tandem of Karl Joseph at strong and Andrew Sendejo at free hasn’t exactly clicked. Sendejo has been torched and Joseph has been slowed by a hamstring injury. Ronnie Harrison replaced Joseph against the Colts and turned in an interception return for a touchdown, but is out with a concussion. And Joseph was ruled out for the second game in a row. Enter Sheldrick Redwine. After the Harrison concussion against the Colts, Redwine entered and made an interception on his first defensive snap of the season. Now Redwine will start as the strong safety and pair with Sendejo against a Steelers offense that can field three dangerous receivers and two productive tight ends. Redwine made five starts last season after the safety position blew up in injuries, releases and benchings. He seems to be a better player as a result of that experience. He has been a key member of the team’s social justice leadership committee. Now this is his opportunity to shine on the field and rescue a troubled position.