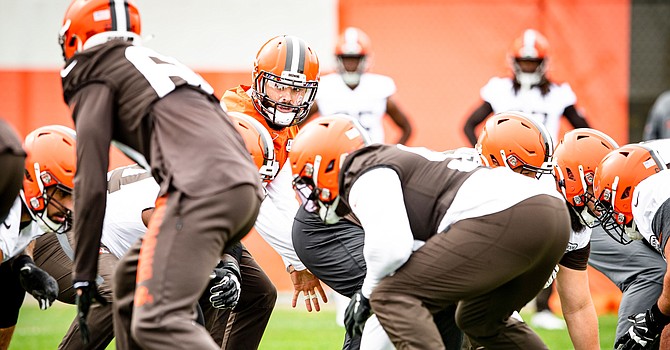 Baker Mayfield was limited at Wednesday's practice but did take a few snaps with the No. 1 offense. (Cleveland Browns)

The biggest Pittsburgh week in … oh, 18 years … kicked off with the Browns’ quarterback saddled with an entire sore right side of his body, two safeties not named Andrew Sendejo out with injuries, and their All-Pro candidate mauler right guard beginning his “week to week” absence with a calf injury.

None of which draws a bead of sweat on the forehead of Kevin Stefanski.

“I know it is cliché, but we have kind of lived it,” said the first-year coach. “It is next man up.”

A closer look at each situation follows.

1.Prior to practice, Baker Mayfield said more than his ribs were sore as a result of the hit leveled by Indianapolis pass rusher Justin Houston on Mayfield’s second interception in the Colts game.

“Yeah, kind of the whole right side,” he said. “Everything is intertwined right there. I am lucky with the way that I landed that it was not directly on my shoulder – kind of rolled a little bit. Obviously, could have been a lot worse.”

Mayfield was limited in practice. The Browns released a photo image of Mayfield under center with the first team offense. But there were also a few images of backup Case Keenum throwing the ball included in the team’s daily photo package.

After the Colts game, Mayfield said he would play in Pittsburgh. Asked if he felt the same on Wednesday, he responded, “Yep. Just day by day. Still confident.”

Since the Cowboys poached Texas-native Garrett Gilbert from the Browns’ practice squad on Monday, Keenum is the only totally healthy quarterback on hand.

“I think we will take it each day at a time here,” Stefanski said of Mayfield’s status. “He is sore today, so we will work through it today and then see where he is tomorrow.”

Incidentally, Mayfield has been hurt by the Steelers’ defense in both games he’s played in Heinz Field.

As a rookie, he was sacked twice, hit at least five other times and bent over in obvious pain on two occasions in what would prove to be Hue Jackson’s last game as Browns coach.

Last season, Mayfield suffered a contusion on his right hand when it struck the face mask of pass rusher Bud Dupree just before halftime. Mayfield played the second half with a protective glove on his right hand and threw for a total of 98 yards for the game in a 20-13 loss to Duck Hodges & Co.

2.Safeties Karl Joseph and Ronnie Harrison, both of whom have contributed interceptions to the Browns’ league-leading total of 12 takeaways, did not practice.

Joseph missed the Colts game with a hamstring injury. Harrison, who started in place of Joseph and returned an interception for a touchdown for the first points posted by the defense this season, is in concussion protocol.

That left the much-maligned Sendejo and second-year sub Sheldrick Redwine, who also had an interception against the Colts, as the likely starters for now.

“We do not expect there to be a drop-off when the depth comes in,” Stefanski said.

3.Teller’s calf injury might be as serious as a partial tear, based on Stefanski’s characterization of it as “week-to-week” rather than day-to-day.

Veteran swingman Chris Hubbard replaced Teller and threw a terrific block on a pull to the left on running back D’Ernest Johnson’s back-breaking 28-yard run in the fourth quarter. But Hubbard’s probable start at right guard would be the first of his NFL career, and he’ll make it against his former team, which knows him well.

Further, Teller was “playing out of his mind this year,” according to running back Kareem Hunt.

Speaking of Hunt, he’ll make his second start for the Browns in place of Nick Chubb, who is in the second week of a reported six-week recovery from a torn MCL in his right knee.

On a Zoom call with Cleveland media, Steelers coach Mike Tomlin said of the Browns’ offensive line, “Those guys need no endorsement from me. Their 188 yards per game on the ground and the quality of possession of the football that they are displaying through five games is all the endorsement they need. They are doing a heck of a job.” …

The breakout of rookie Chase Claypool (four TDs against the Eagles) and probable return of Diontae Johnson gives Steelers quarterback Ben Roethlisberger the possibility of stretching the Browns’ secondary to the limit with a four-receiver set alongside JuJu Smith-Schuster and James Washington. Browns cornerback Terrance Mitchell said of Claypool, “He made some catches. As a whole, their receivers, they are good receivers, but we have to just do our job and we will win.” …

There has been some speculation that teams eliminated from playoff contention later in the season could get lax on Covid protocols. Browns center JC Tretter, the NFLPA president, explained why he has no concern of that happening. “I think guys … do not want to get sick,” he said. “They do not want to contract the virus and bring that home to their families. I do not think their record will make the idea change. There is a personal responsibility, so I am not very concerned with guys kind of throwing the protocols to the wayside because of whatever their record is.” Tretter also said the NFLPA is in favor of all future postponed games being played, regardless of playoff implications or not. (Left unsaid was that the union previously agreed in negotiations that players would not be paid for any games canceled.)