Is Baker Mayfield Being Reinvented As A Game Manager? 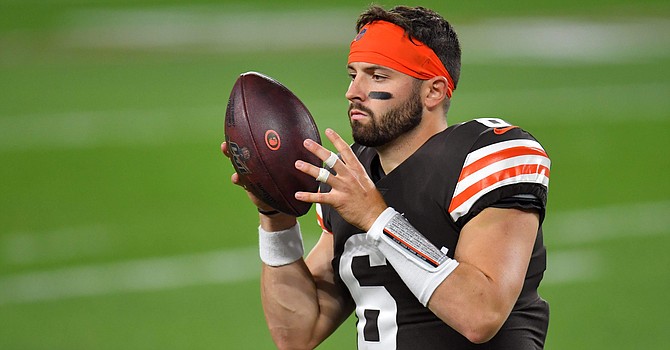 It's undeniable that less is more when it comes to Baker Mayfield's pass attempts per game. (Heavy.com)

One game could be a fluke, but two constitutes an early trend. Especially since both games were Browns wins.

The reinvention of Baker Mayfield from swashbuckling gunslinger to game manager is unfolding before our eyes.

Look what’s going on with the quarterback in Kevin Stefanski’s offense:

Take a closer look at the second halves of those games:

This from the guy who outdueled Patrick Mahomes in college, winning, 66-59, with a 545-yard, 7-TD performance.

The offensive formula of the Browns’ two wins under Stefanski has been to pound Nick Chubb and Kareem Hunt 67 times for 364 yards and 5 touchdowns.

Chubb and Hunt carried the rock 40 times in the second halves of those wins while Mayfield was attempting 16 passes.

I asked Stefanski if that was a favorable formula in his offense.

“I think the favorable formula is having a lead in that fourth quarter, and if you can run it efficiently and be smart about how you throw it, that is the formula for winning, but we do not go into it thinking about the number of attempts,” he said.

Nevertheless, Mayfield’s won-loss record as Browns starting quarterback improved to 7-2 when he throws 30 or fewer times. He is 7-16 when he throws more than 30 times.

It’s a statistic not unique to Mayfield, of course.

Vikings QB Kirk Cousins was 7-1 when throwing 30 or fewer times last year with Stefanski as offensive coordinator and play-caller.

49ers QB Jimmy Garoppolo was 10-1 in the same scheme for coach Kyle Shanahan.

Case Keenum was 7-1 in 2017 with Stefanski as QB coach of the Vikings.

The key to long-term success is being able to win if the quarterback has to throw more than 30 times.

One last thing about Mayfield. Maybe the image of gunslinger was a bit exaggerated. In his 40 starts for Oklahoma, Mayfield averaged 28.9 pass attempts per game. He was 34-6 in those games.

Return specialist and receiver JoJo Natson suffered a torn ACL in the Washington game. It’s a season-ending injury for Natson, who at 153 pounds, is the second-lightest player in Browns history.

“Disappointed,” Stefanski said. “Hate long-term injuries like that. JoJo was doing a nice job for us … on the offensive side.”

On offense, Natson was used mostly as a jet sweep option (one carry for three yards against Washington), but he was also wide open on a pass route in the first quarter which could have been an easy 50-yard touchdown had Mayfield spotted him.

As a returner, Natson returned three punts for 25 yards and had one kickoff return for 31 yards. The only kickoff return attempt in three games came when Washington was forced to kick off from the 15-yard line after a taunting penalty on a touchdown.

Running back D’Ernest Johnson took over for Natson in the Washington game as the returner.

It’s possible that Natson’s misfortune could open the door for Donovan Peoples-Jones to get his first game action. The big rookie receiver returned kicks at Michigan and was second in line behind Natson in training camp.

“We will work through that,” Stefanski said. “I think we have some candidates in the building. That is something that I am going to sit down with [special teams coordinator Mike Priefer] and talk through as this week unfolds of how we want to attack this.”

In their first action of the season after missing 4-5 weeks with injuries, cornerback Kevin Johnson had 38 snaps and linebacker Mack Wilson had six. Stefanski said, “I would anticipate that both those guys and a lot of these guys coming back from injury will slowly but surely add to their rep totals.” …

After two good outings, rookie left tackle Jedrick Wills had a learning experience. He committed false starts on the first two offensive series and then had a tough time against Washington edge rusher Montez Sweat, who was credited with one sack, two tackles for losses, and four quarterback hits. “I think he was disappointed in those two penalties,” Stefanski said. “I know I was. I let him know that. We can’t let that happen. We just have to make sure that we clean that up. Once he settled in, he played really solid football for us, but I do not want him to have to go through that to settle in.”