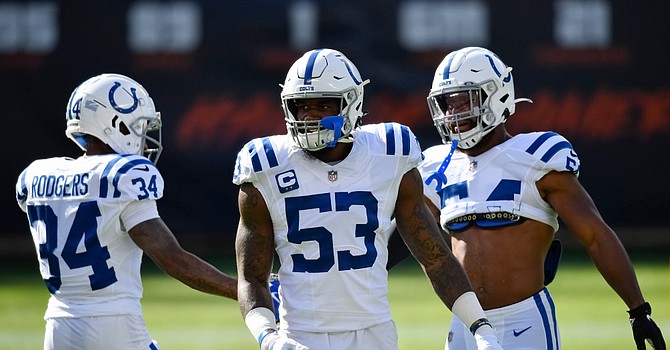 The playing status Sunday of All-Pro linebacker Darius Leonard, a big key to the Colts' No. 1-ranked defense, is uncertain after he suffered a groin injury in Sunday's 19-11 win over the Bears. (USAToday)

1.The Colts made two major acquisitions in the span of four days in March. The first was trading the 13th pick in the first round to the 49ers for 3-technique tackle DeForest Buckner. The Colts then signed Buckner to a four-year contract for $84 million. Buckner, who was credited with 1.5 sacks of Patrick Mahomes in the Super Bowl, has paid dividends. In four games, Buckner has 1.5 sacks, including one of Kirk Cousins in the end zone for a safety, and leads the Colts with eight quarterback hits.

2.The second acquisition was signing ex-Chargers quarterback Philip Rivers, 39, to a one-year deal for $25 million. Head coach Frank Reich and offensive coordinator Nick Sirianni were with Rivers for three years in San Diego. Rivers is sixth on the all-time NFL passing yards list. His 228 consecutive starts at quarterback trail only Brett Favre (297) all time. With the Chargers, Rivers started seven times against the Browns, winning five, with 10 touchdowns v. 2 interceptions and a passer rating of 98.8. For the Colts, he’s completing 72.7 percent of his passes, has 4 touchdowns v. 3 interceptions, and a passer rating of 97.3.

4.The Colts could be facing a crisis at linebacker. They carried seven on their roster cut to 53 and have only three healthy linebackers entering the work week. Two-time All-Pro weakside linebacker Darius Leonard missed the second half of the Bears game with a groin injury. Second-year strong side linebacker Bobby Okereke had a surgical procedure on a thumb injury on Monday. And backup linebacker E.J. Speed had an MRI on an elbow injury. The healthy linebackers are Anthony Walker, backup Zaire Franklin and rookie special teamer Jordan Glasgow. This is not good for a defense facing the NFL’s No. 1 rushing team – by a lot.

1.The Colts’ vaunted starting offensive line has been intact for 22 consecutive games – more than any NFL unit by plenty. But that streak could be threatened by a rib injury suffered late in the Chicago game by left tackle Anthony Castonzo. He is expected to be limited in the practice week and his game status won’t be clarified until late in the week. Journeyman Chaz Green is the backup.

2.Bubba Ventrone, a Browns special teams ace in the Eric Mangini years, is in his third year as Colts special teams coordinator. Ventrone is breaking in a rookie kicker Rodrigo Blankenship. The rookie free agent from Georgia is 12 of 14 in field goals and 9 of 9 in PATs. In the Colts’ last three wins, Blankenship has outscored Colts opponents, 14-11, 10-7, and 13-11.

3.Former Browns cornerback T.J. Carrie had a Pick 6 in the Colts’ first win against the Vikings. He sat out last week with a hamstring injury.

Small world: Defensive coordinator Matt Eberflus was Browns linebackers coach in 2009-10 … Special teams coordinator Bubba Ventrone was a safety and special teams player with the Browns from 2009-12 … Cornerback T.J. Carrie played for the Browns in 2018-19 … Safety Ibraheim Campbell was a Browns fourth-round draft pick in 2015 and played for them through 2017 … Defensive tackle Eli Ankou played for the Browns in 2019 and was in their 2020 training camp … Defensive line coach Brian Baker was Browns outside linebackers coach in 2013 … Director of College Scouting Morocco Brown was Browns VP of player personnel in 2014-15.