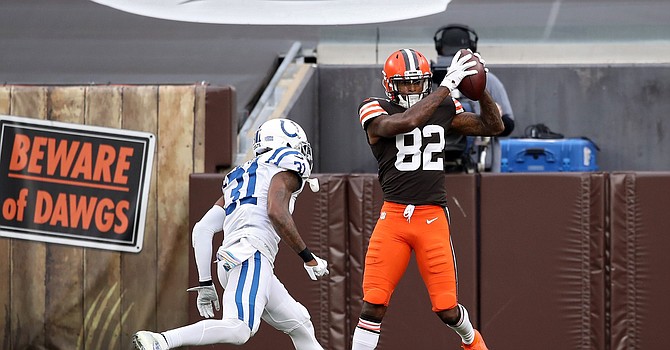 Rashard Higgins collects his first touchdown catch of his 2020 campaign in the first half against Indianapolis. (Gregory Shamus/Getty Images)

Instant takeaways from Browns’ 32-23 win over the Indianapolis Colts …

1. Jug, or not?: The Browns are really rolling now. They cruised to their fourth straight win to improve to 4-1 for the first time since 1994 and keep pace with victorious Pittsburgh (4-0) and Baltimore (4-1) in the top-heavy AFC North. The 32-23 win over the playoff-aspirant Indianapolis Colts (3-2) included a Ronnie Harrison interception return for a touchdown and a Browns safety when Myles Garrett’s pressure scared Philip Rivers into intentional grounding from the end zone. Reserve safety Sheldrick Redwine added an interception with 11:24 left. The Browns built a 20-10 halftime lead on Baker Mayfield’s arm and some awesome catches by his receivers, as the running game stalled against the Colts’ tough defense. Mayfield was intercepted twice in the second half, but the Colts could only score field goals after the turnovers.

2. Hanging on: Mayfield leaked oil in the second half, going 2 of 9 for 19 yards and two interceptions. Needing first downs to eat the clock after the Colts’ closed the lead to one score with 2:50 left, the Browns called on Kareem Hunt and D’Ernest Johnson to ice the win. Johnson’s 28-yard scamper around left end on third-and-9 was huge at the two-minute warning. Cody Parkey's 46-yard field goal with :21 left sealed the deal.

4. Just like that: The game looked in hand when safety Ronnie Harrison, making his first start of the year, jumped a late read by Philip Rivers and turned it into a 47-yard Pick 6 for a touchdown on the Colts’ first possession of the second half to make it 27-10, Browns. But that didn’t hold up long. Isaiah Rodgers returned the ensuing kickoff 101 yards for a Colts touchdown and then Mayfield’s interception-less streak was stopped after two games. Linebacker Bobby Okereke’s interception set up a Colts field goal and the Browns’ lead was shrunk to 27-20 entering the fourth quarter.

5. Hot half: Mayfield had perhaps his best half of the year in building a 20-10 lead. He was 19 of 28 for 228 yards and tossed touchdowns to Kareem Hunt (2 yards) and Rashard Higgins (15). The 228 yards was a season-high for Mayfield for a full game. He was real good on the two touchdown drives, converting a third-and-10 with a through-the-needle completion to Austin Hooper and a fourth-and-1 from the 5 to Odell Beckham Jr. on a quick out. On the second TD possession, Mayfield got a great reception from Beckham for 26 yards on which he leaped over tight coverage from Tavon Wilson.

6. OBJ the QB: Beckham, who received a pass from Jarvis Landry against Dallas, made his debut throwing the ball in the second quarter. He took a pitch from Hunt and fired to Hooper for 18 yards.

7. Mr. Dependable: Jarvis Landry took a solid shot to his right kidney area after making a 32-yard reception early in the game. Landry, who had major hip surgery in February, crawled to the sideline and then was escorted to the medical tent. Landry came back on the field after missing three plays. Landry also had a 30-yard gain among his four catches for 88 yards in the first half.

8. Red carpet unfurled: There was a Rashard Higgins sighting. He made his first start of the season when the Browns came out in a three-receiver set, and then scored his first touchdown on a 15-yard completion from Mayfield when the Browns went up, 17-10. It was Higgins’ first TD since Nov. 10 against Buffalo last year.

9. 0 for 2: Frank Reich burned his two replay challenges in the first half. He challengd a non-fumble call on Kareem Hunt after the first play from scrimmage and then a 26-yard reception by Beckham in the second quarter. He was wrong on both.

10. Streak alive: Myles Garrett sacked the difficult-to-sack Rivers in the first quarter to keep his sack streak going through five games. He has six on the season.

11. There he is again: Free safety Andrew Sendejo has seemingly been victimized more than anyone in the Browns’ secondary, and he showed up in the frames of two more big gains in the first half, arriving late on a 36-yard completion to Marcus Johnson and trailing Ashton Dulin on a laid-out, 34-yard catch.

11. Oh no: Right guard Wyatt Teller, who has received accolades all over the analytics universe, had to leave in the first quarter with a calf injury. He did not return. Chris Hubbard replaced him.