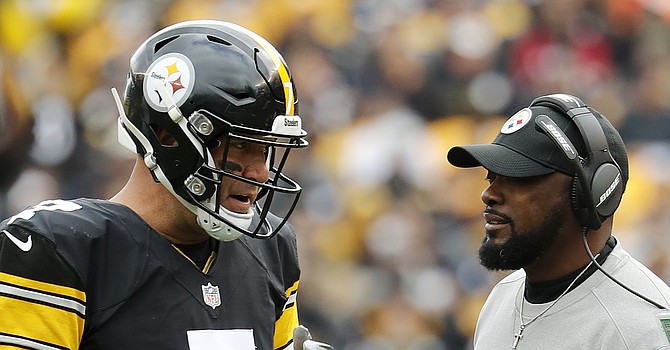 Mike Tomlin and Ben Roethlisberger have never lost to the Browns in Heinz field. (The Boston Globe)

1.Ben Roethlisberger returns to the helm and the question is what version will the Browns see: The quarterback who struggled to connect on deeper throws with his excellent receivers for over a month, or the one who suddenly found his game in the final two quarters in Game 15 against the Colts? In that game critical to the Colts, Roethlisberger threw for 244 yards and three touchdowns after reverting to a hurry-up, no-huddle attack. Big Ben, 38, had sought to save his body in his 17th NFL campaign with an uncharacteristic dink-and-dunk approach. It worked for 11 straight wins until defenses caught up. The Steelers’ worst season running the ball contributed to an offense that went four games in a row without scoring 20 points until the breakout against the Colts.

2.All the other players rested from the Week 16 game in Cleveland will be back and waiting for the Browns in Pittsburgh – center Maurkice Pouncey, edge rusher T.J. Watt, defensive lineman Cameron Heyward, and nose tackle Tyson Alalulu. Also expected to be available are starters who didn’t play last week because of injury, such as safety Terrell Edmunds, kicker Chris Boswell, and possibly two players off injured reserve -- linebacker Robert Spillane and guard Matt Feiler.

3.There is a chance tight end Eric Ebron and linebacker Cassius Marsh might come off Covid reserve, but cornerback Joe Haden won’t be eligible to play.

4.With Mason Rudolph as quarterback last week, Mike Tomlin sprinkled in doses of mobile quarterback Josh Dobbs to add an RPO element to his offense. Dobbs ran the ball two times for 20 yards and was credited with 4 of 5 passing on essentially short shovel pitches to motioning receivers. Tomlin said it’s a possibility Dobbs could reprise that role again. But he has never done that with Roethlisberger at quarterback and there is a feeling Roethlisberger would resist coming off the field.

1.The last Browns quarterback to win in Heinz Field was Tim Couch on Oct. 5, 2003. The Steelers have won 17 in a row since then. That means Tomlin and Roethlisberger have never lost to the Browns in Heinz Field.

3.In the last six quarters – two quarterbacked by Roethlisberger, and four by Rudolph – the Steelers have seven passes of 25 yards or more. They had only 40 in the previous 14 ½ games.

4.Roethlisberger is 23-2-1 against the Browns in games he started. He also won a game in which he expected to rest but came on in the first quarter to replace sub Landry Jones, who got hurt on his first offensive series.